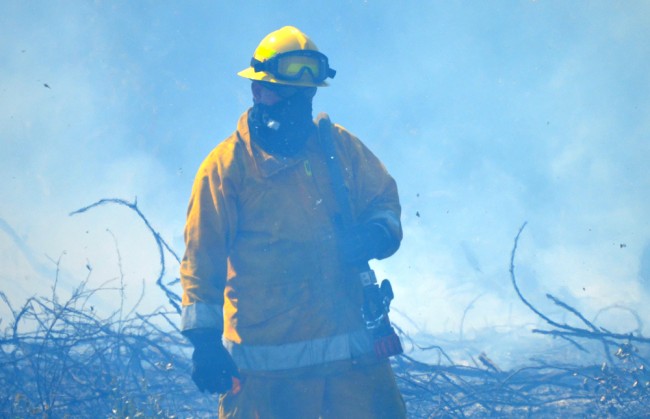 There’s really been only one story in Flagler County in the past few weeks: The wildfires. I’ve had a chance to see the disaster up close a few times, and to see firefighters in action at several of the fires. These men and women’s valor can’t be overstated. Nor can the effort they’re putting out, though words really are cheap when trying to convey the magnificent work getting done out there, and the price being paid for it. County firefighters have had all leaves canceled. They’ve been working on mandatory 36-hour shifts for weeks, with no end in sight. As County Administrator Craig Coffey put it yesterday, “we’re at the end of our rope,” though somehow last week the same county administrator and his deputy, along with the Palm Coast city manager, thought it was fine to skip town and attend a conference at a posh resort in Clearwater. The conference was titled: “Making magic: how bold can government be?” Very bold, obviously.

But the fires have been a story of disconnects all around.

Northeast and South Florida are in drought conditions. Fires aren’t raging only in Flagler, Volusia, St. Johns and Putnam. If you bring up the Division of Forestry’s map of wildfires in the state, not a single one of the division’s districts is spared, though northeast Florida has the bulk of them. So when is Gov. Rick Scott going to declare a state of emergency? It’s not just an alarmist designation. It’s a financial urgency for counties like Flagler, where the county fire department alone has been spending $40,000 a week just on overtime. That doesn’t include other costs. The county had a $350,000 reserve for this sort of disaster. But it’s burning through it. A disaster designation from the state would release more dollars and other forms of aid. But this is the Scott administration we’re talking about. It starts fires. It doesn’t put them out.

It’s not just the fires. The drought alone would warrant a disaster designation. The average water demand for the week a year ago in Palm Coast was 7.2 million gallons of water per day. Last week, it was 8.8 million gallons. That’s a 22 percent increase. The population hasn’t increased 22 percent. By some measures—labor force and school enrollment—it’s fallen by a percent or two. Richard Adams, the city’s public works director, attributes spiking water use directly to “extended drought conditions.” Last year then-Gov. Charlie Crist sought and got a federal disaster designation for Flagler and 34 other counties in response to a freeze and last year’s drought. He got it. Where’s Scott now? Probably scouting the location for his his next tea party spectacle.

There’s a local disconnect, too.

Flagler County firefighters have been battling wildfires since December, when the county’s burn ban was first declared, though  the first sizeable fire broke out in March with the 350-acre Old Brick Road blaze. Then in May it’s as if hell started franchising all over the western portion of the county, anchoring its most destructive business just west of Espanola. It’s been 13 years since Flagler County has seen anything that destructive. But to many people on the east side of the county the fires might as well be in another world, because the smoke hasn’t been blowing this way. Last week when smoke blew over Palm Coast for a day, a fireman told me that he got “a ton of calls” at his station—which never happens: people usually call 911—from people asking if there was a fire somewhere. He couldn’t believe it. People still have no clue, though those who do have been generous: at the county’s Emergency Operations Center yesterday, Flagler County’s Marine Corps League was dropping off crates of water for the firefighters, as many people have, doing their part for the cause.

The disconnect is unreal. The hypocrisy is unreal. Get with it, people. Words are the cheapest commodity next to false flattery. Don’t just call these firefighters heroes. That’s meaningless. Here’s what would make a difference: quit trashing public employees. Quit trashing the unions that keep them strong. Quit voting for clueless lawmakers who trash either. And put your money where your hero-worship is for a change next time you think a tax cut is more important than paying for the men and women saving your property and your skin.