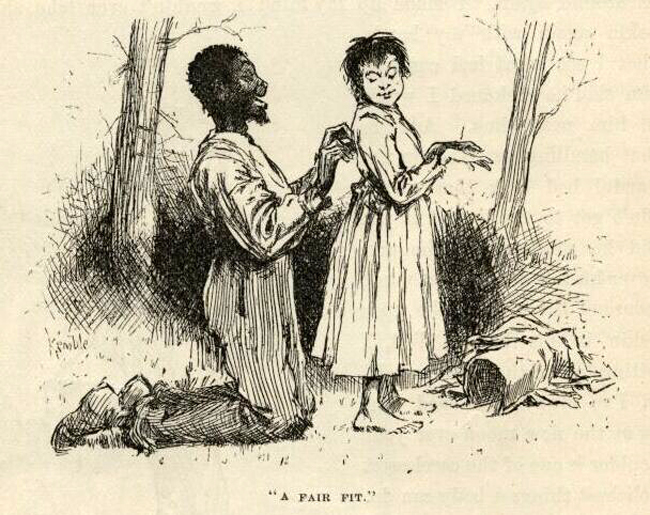 AFTER breakfast I wanted to talk about the dead man and guess out how he come to be killed, but Jim didn’t want to. He said it would fetch bad luck; and besides, he said, he might come and ha’nt us; he said a man that warn’t buried was more likely to go a-ha’nting around than one that was planted and comfortable. That sounded pretty reasonable, so I didn’t say no more; but I couldn’t keep from studying over it and wishing I knowed who shot the man, and what they done it for.

We rummaged the clothes we’d got, and found eight dollars in silver sewed up in the lining of an old blanket overcoat. Jim said he reckoned the people in that house stole the coat, because if they’d a knowed the money was there they wouldn’t a left it. I said I reckoned they killed him, too; but Jim didn’t want to talk about that. I says:

“Now you think it’s bad luck; but what did you say when I fetched in the snake-skin that I found on the top of the ridge day before yesterday? You said it was the worst bad luck in the world to touch a snake-skin with my hands. Well, here’s your bad luck! We’ve raked in all this truck and eight dollars besides. I wish we could have some bad luck like this every day, Jim.” 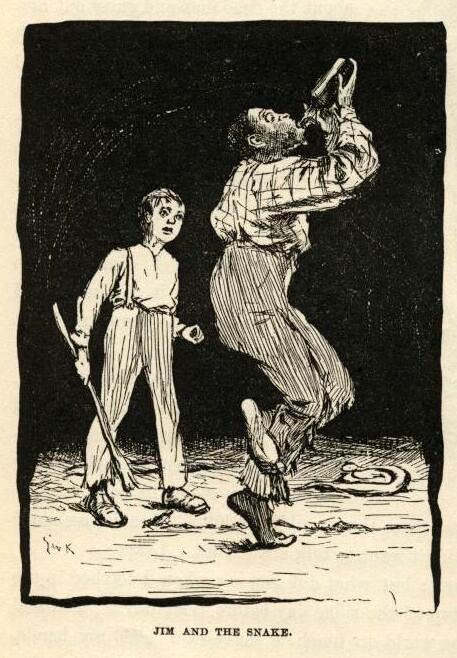 It did come, too. It was a Tuesday that we had that talk. Well, after dinner Friday we was laying around in the grass at the upper end of the ridge, and got out of tobacco. I went to the cavern to get some, and found a rattlesnake in there. I killed him, and curled him up on the foot of Jim’s blanket, ever so natural, thinking there’d be some fun when Jim found him there. Well, by night I forgot all about the snake, and when Jim flung himself down on the blanket while I struck a light the snake’s mate was there, and bit him.

He jumped up yelling, and the first thing the light showed was the varmint curled up and ready for another spring. I laid him out in a second with a stick, and Jim grabbed pap’s whisky-jug and begun to pour it down.

He was barefooted, and the snake bit him right on the heel. That all comes of my being such a fool as to not remember that wherever you leave a dead snake its mate always comes there and curls around it. Jim told me to chop off the snake’s head and throw it away, and then skin the body and roast a piece of it. I done it, and he eat it and said it would help cure him. He made me take off the rattles and tie them around his wrist, too. He said that that would help. Then I slid out quiet and throwed the snakes clear away amongst the bushes; for I warn’t going to let Jim find out it was all my fault, not if I could help it.

Jim sucked and sucked at the jug, and now and then he got out of his head and pitched around and yelled; but every time he come to himself he went to sucking at the jug again. His foot swelled up pretty big, and so did his leg; but by and by the drunk begun to come, and so I judged he was all right; but I’d druther been bit with a snake than pap’s whisky.

Jim was laid up for four days and nights. Then the swelling was all gone and he was around again. I made up my mind I wouldn’t ever take a-holt of a snake-skin again with my hands, now that I see what had come of it. Jim said he reckoned I would believe him next time. And he said that handling a snake-skin was such awful bad luck that maybe we hadn’t got to the end of it yet. He said he druther see the new moon over his left shoulder as much as a thousand times than take up a snake-skin in his hand. Well, I was getting to feel that way myself, though I’ve always reckoned that looking at the new moon over your left shoulder is one of the carelessest and foolishest things a body can do. Old Hank Bunker done it once, and bragged about it; and in less than two years he got drunk and fell off of the shot-tower, and spread himself out so that he was just a kind of a layer, as you may say; and they slid him edgeways between two barn doors for a coffin, and buried him so, so they say, but I didn’t see it. Pap told me. But anyway it all come of looking at the moon that way, like a fool.

Well, the days went along, and the river went down between its banks again; and about the first thing we done was to bait one of the big hooks with a skinned rabbit and set it and catch a catfish that was as big as a man, being six foot two inches long, and weighed over two hundred pounds. We couldn’t handle him, of course; he would a flung us into Illinois. We just set there and watched him rip and tear around till he drownded. We found a brass button in his stomach and a round ball, and lots of rubbage. We split the ball open with the hatchet, and there was a spool in it. Jim said he’d had it there a long time, to coat it over so and make a ball of it. It was as big a fish as was ever catched in the Mississippi, I reckon. Jim said he hadn’t ever seen a bigger one. He would a been worth a good deal over at the village. They peddle out such a fish as that by the pound in the market-house there; everybody buys some of him; his meat’s as white as snow and makes a good fry.

Next morning I said it was getting slow and dull, and I wanted to get a stirring up some way. I said I reckoned I would slip over the river and find out what was going on. Jim liked that notion; but he said I must go in the dark and look sharp. Then he studied it over and said, couldn’t I put on some of them old things and dress up like a girl? That was a good notion, too. So we shortened up one of the calico gowns, and I turned up my trouser-legs to my knees and got into it. Jim hitched it behind with the hooks, and it was a fair fit. I put on the sun-bonnet and tied it under my chin, and then for a body to look in and see my face was like looking down a joint of stove-pipe. Jim said nobody would know me, even in the daytime, hardly. I practiced around all day to get the hang of the things, and by and by I could do pretty well in them, only Jim said I didn’t walk like a girl; and he said I must quit pulling up my gown to get at my britches-pocket. I took notice, and done better.

I started up the Illinois shore in the canoe just after dark.

I started across to the town from a little below the ferry-landing, and the drift of the current fetched me in at the bottom of the town. I tied up and started along the bank. There was a light burning in a little shanty that hadn’t been lived in for a long time, and I wondered who had took up quarters there. I slipped up and peeped in at the window. There was a woman about forty year old in there knitting by a candle that was on a pine table. I didn’t know her face; she was a stranger, for you couldn’t start a face in that town that I didn’t know. Now this was lucky, because I was weakening; I was getting afraid I had come; people might know my voice and find me out. But if this woman had been in such a little town two days she could tell me all I wanted to know; so I knocked at the door, and made up my mind I wouldn’t forget I was a girl. 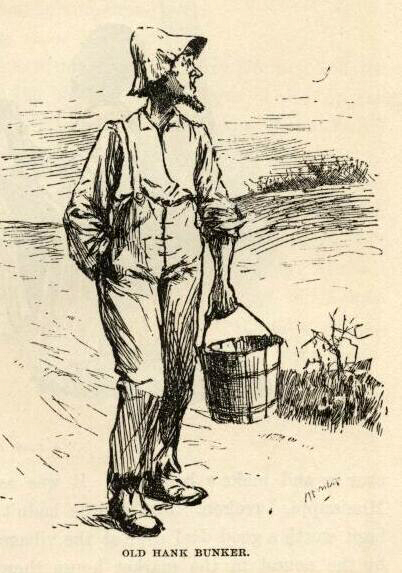