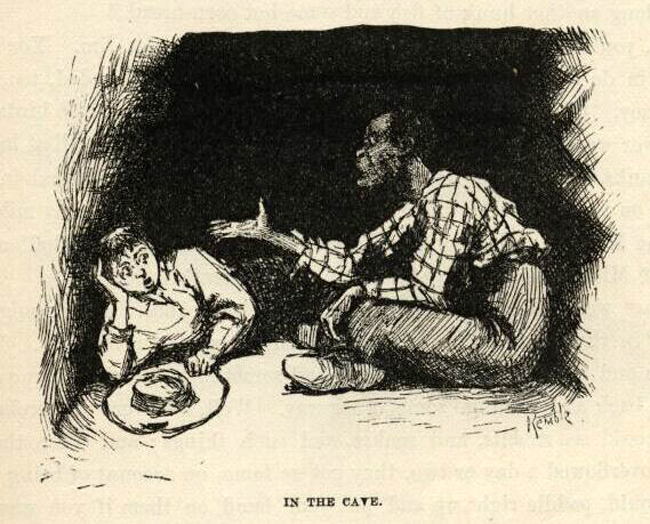 I WANTED to go and look at a place right about the middle of the island that I’d found when I was exploring; so we started and soon got to it, because the island was only three miles long and a quarter of a mile wide.

This place was a tolerable long, steep hill or ridge about forty foot high. We had a rough time getting to the top, the sides was so steep and the bushes so thick. We tramped and clumb around all over it, and by and by found a good big cavern in the rock, most up to the top on the side towards Illinois. The cavern was as big as two or three rooms bunched together, and Jim could stand up straight in it. It was cool in there. Jim was for putting our traps in there right away, but I said we didn’t want to be climbing up and down there all the time.

Jim said if we had the canoe hid in a good place, and had all the traps in the cavern, we could rush there if anybody was to come to the island, and they would never find us without dogs. And, besides, he said them little birds had said it was going to rain, and did I want the things to get wet?

So we went back and got the canoe, and paddled up abreast the cavern, and lugged all the traps up there. Then we hunted up a place close by to hide the canoe in, amongst the thick willows. We took some fish off of the lines and set them again, and begun to get ready for dinner.

The door of the cavern was big enough to roll a hogshead in, and on one side of the door the floor stuck out a little bit, and was flat and a good place to build a fire on. So we built it there and cooked dinner.

We spread the blankets inside for a carpet, and eat our dinner in there. We put all the other things handy at the back of the cavern. Pretty soon it darkened up, and begun to thunder and lighten; so the birds was right about it. Directly it begun to rain, and it rained like all fury, too, and I never see the wind blow so. It was one of these regular summer storms. It would get so dark that it looked all blue-black outside, and lovely; and the rain would thrash along by so thick that the trees off a little ways looked dim and spider-webby; and here would come a blast of wind that would bend the trees down and turn up the pale underside of the leaves; and then a perfect ripper of a gust would follow along and set the branches to tossing their arms as if they was just wild; and next, when it was just about the bluest and blackest—FST! it was as bright as glory, and you’d have a little glimpse of tree-tops a-plunging about away off yonder in the storm, hundreds of yards further than you could see before; dark as sin again in a second, and now you’d hear the thunder let go with an awful crash, and then go rumbling, grumbling, tumbling, down the sky towards the under side of the world, like rolling empty barrels down stairs—where it’s long stairs and they bounce a good deal, you know.

“Jim, this is nice,” I says. “I wouldn’t want to be nowhere else but here. Pass me along another hunk of fish and some hot corn-bread.”

“Well, you wouldn’t a ben here ‘f it hadn’t a ben for Jim. You’d a ben down dah in de woods widout any dinner, en gittn’ mos’ drownded, too; dat you would, honey. Chickens knows when it’s gwyne to rain, en so do de birds, chile.”

The river went on raising and raising for ten or twelve days, till at last it was over the banks. The water was three or four foot deep on the island in the low places and on the Illinois bottom. On that side it was a good many miles wide, but on the Missouri side it was the same old distance across—a half a mile—because the Missouri shore was just a wall of high bluffs.

Daytimes we paddled all over the island in the canoe, It was mighty cool and shady in the deep woods, even if the sun was blazing outside. We went winding in and out amongst the trees, and sometimes the vines hung so thick we had to back away and go some other way. Well, on every old broken-down tree you could see rabbits and snakes and such things; and when the island had been overflowed a day or two they got so tame, on account of being hungry, that you could paddle right up and put your hand on them if you wanted to; but not the snakes and turtles—they would slide off in the water. The ridge our cavern was in was full of them. We could a had pets enough if we’d wanted them.

One night we catched a little section of a lumber raft—nice pine planks. It was twelve foot wide and about fifteen or sixteen foot long, and the top stood above water six or seven inches—a solid, level floor. We could see saw-logs go by in the daylight sometimes, but we let them go; we didn’t show ourselves in daylight.

Another night when we was up at the head of the island, just before daylight, here comes a frame-house down, on the west side. She was a two-story, and tilted over considerable. We paddled out and got aboard—clumb in at an upstairs window. But it was too dark to see yet, so we made the canoe fast and set in her to wait for daylight.

The light begun to come before we got to the foot of the island. Then we looked in at the window. We could make out a bed, and a table, and two old chairs, and lots of things around about on the floor, and there was clothes hanging against the wall. There was something laying on the floor in the far corner that looked like a man. So Jim says:

But it didn’t budge. So I hollered again, and then Jim says:

He went, and bent down and looked, and says:

I didn’t look at him at all. Jim throwed some old rags over him, but he needn’t done it; I didn’t want to see him. There was heaps of old greasy cards scattered around over the floor, and old whisky bottles, and a couple of masks made out of black cloth; and all over the walls was the ignorantest kind of words and pictures made with charcoal. There was two old dirty calico dresses, and a sun-bonnet, and some women’s underclothes hanging against the wall, and some men’s clothing, too. We put the lot into the canoe—it might come good. There was a boy’s old speckled straw hat on the floor; I took that, too. And there was a bottle that had had milk in it, and it had a rag stopper for a baby to suck. We would a took the bottle, but it was broke. There was a seedy old chest, and an old hair trunk with the hinges broke. They stood open, but there warn’t nothing left in them that was any account. The way things was scattered about we reckoned the people left in a hurry, and warn’t fixed so as to carry off most of their stuff.

We got an old tin lantern, and a butcher-knife without any handle, and a bran-new Barlow knife worth two bits in any store, and a lot of tallow candles, and a tin candlestick, and a gourd, and a tin cup, and a ratty old bedquilt off the bed, and a reticule with needles and pins and beeswax and buttons and thread and all such truck in it, and a hatchet and some nails, and a fishline as thick as my little finger with some monstrous hooks on it, and a roll of buckskin, and a leather dog-collar, and a horseshoe, and some vials of medicine that didn’t have no label on them; and just as we was leaving I found a tolerable good curry-comb, and Jim he found a ratty old fiddle-bow, and a wooden leg. The straps was broke off of it, but, barring that, it was a good enough leg, though it was too long for me and not long enough for Jim, and we couldn’t find the other one, though we hunted all around.

And so, take it all around, we made a good haul. When we was ready to shove off we was a quarter of a mile below the island, and it was pretty broad day; so I made Jim lay down in the canoe and cover up with the quilt, because if he set up people could tell he was a nigger a good ways off. I paddled over to the Illinois shore, and drifted down most a half a mile doing it. I crept up the dead water under the bank, and hadn’t no accidents and didn’t see nobody. We got home all safe. 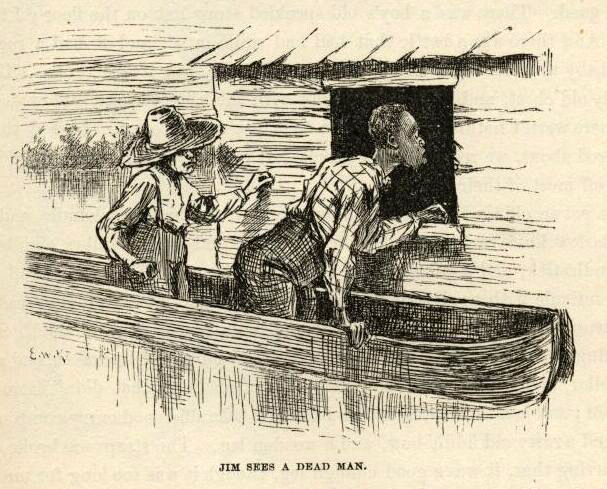