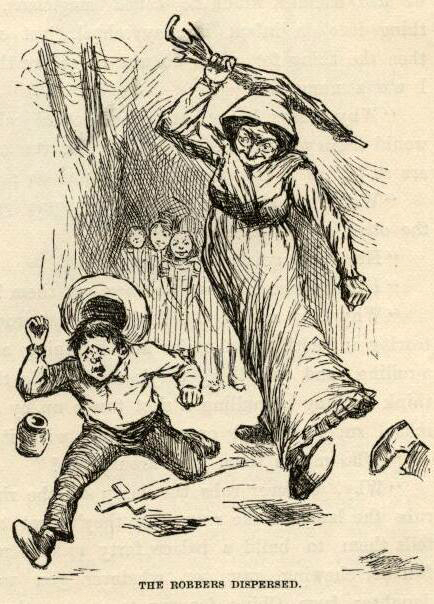 Chapter III: A Good Going Over – Grace Triumphant – “One of Tom Sawyer’s Lies.”

WELL, I got a good going-over in the morning from old Miss Watson on account of my clothes; but the widow she didn’t scold, but only cleaned off the grease and clay, and looked so sorry that I thought I would behave awhile if I could. Then Miss Watson she took me in the closet and prayed, but nothing come of it. She told me to pray every day, and whatever I asked for I would get it. But it warn’t so. I tried it. Once I got a fish-line, but no hooks. It warn’t any good to me without hooks. I tried for the hooks three or four times, but somehow I couldn’t make it work. By and by, one day, I asked Miss Watson to try for me, but she said I was a fool. She never told me why, and I couldn’t make it out no way.

I set down one time back in the woods, and had a long think about it. I says to myself, if a body can get anything they pray for, why don’t Deacon Winn get back the money he lost on pork? Why can’t the widow get back her silver snuffbox that was stole? Why can’t Miss Watson fat up? No, says I to my self, there ain’t nothing in it. I went and told the widow about it, and she said the thing a body could get by praying for it was “spiritual gifts.” This was too many for me, but she told me what she meant—I must help other people, and do everything I could for other people, and look out for them all the time, and never think about myself. This was including Miss Watson, as I took it. I went out in the woods and turned it over in my mind a long time, but I couldn’t see no advantage about it—except for the other people; so at last I reckoned I wouldn’t worry about it any more, but just let it go. Sometimes the widow would take me one side and talk about Providence in a way to make a body’s mouth water; but maybe next day Miss Watson would take hold and knock it all down again. I judged I could see that there was two Providences, and a poor chap would stand considerable show with the widow’s Providence, but if Miss Watson’s got him there warn’t no help for him any more. I thought it all out, and reckoned I would belong to the widow’s if he wanted me, though I couldn’t make out how he was a-going to be any better off then than what he was before, seeing I was so ignorant, and so kind of low-down and ornery.

Pap he hadn’t been seen for more than a year, and that was comfortable for me; I didn’t want to see him no more. He used to always whale me when he was sober and could get his hands on me; though I used to take to the woods most of the time when he was around. Well, about this time he was found in the river drownded, about twelve mile above town, so people said. They judged it was him, anyway; said this drownded man was just his size, and was ragged, and had uncommon long hair, which was all like pap; but they couldn’t make nothing out of the face, because it had been in the water so long it warn’t much like a face at all. They said he was floating on his back in the water. They took him and buried him on the bank. But I warn’t comfortable long, because I happened to think of something. I knowed mighty well that a drownded man don’t float on his back, but on his face. So I knowed, then, that this warn’t pap, but a woman dressed up in a man’s clothes. So I was uncomfortable again. I judged the old man would turn up again by and by, though I wished he wouldn’t.

We played robber now and then about a month, and then I resigned. All the boys did. We hadn’t robbed nobody, hadn’t killed any people, but only just pretended. We used to hop out of the woods and go charging down on hog-drivers and women in carts taking garden stuff to market, but we never hived any of them. Tom Sawyer called the hogs “ingots,” and he called the turnips and stuff “julery,” and we would go to the cave and powwow over what we had done, and how many people we had killed and marked. But I couldn’t see no profit in it. One time Tom sent a boy to run about town with a blazing stick, which he called a slogan (which was the sign for the Gang to get together), and then he said he had got secret news by his spies that next day a whole parcel of Spanish merchants and rich A-rabs was going to camp in Cave Hollow with two hundred elephants, and six hundred camels, and over a thousand “sumter” mules, all loaded down with di’monds, and they didn’t have only a guard of four hundred soldiers, and so we would lay in ambuscade, as he called it, and kill the lot and scoop the things. He said we must slick up our swords and guns, and get ready. He never could go after even a turnip-cart but he must have the swords and guns all scoured up for it, though they was only lath and broomsticks, and you might scour at them till you rotted, and then they warn’t worth a mouthful of ashes more than what they was before. I didn’t believe we could lick such a crowd of Spaniards and A-rabs, but I wanted to see the camels and elephants, so I was on hand next day, Saturday, in the ambuscade; and when we got the word we rushed out of the woods and down the hill. But there warn’t no Spaniards and A-rabs, and there warn’t no camels nor no elephants. It warn’t anything but a Sunday-school picnic, and only a primer-class at that. We busted it up, and chased the children up the hollow; but we never got anything but some doughnuts and jam, though Ben Rogers got a rag doll, and Jo Harper got a hymn-book and a tract; and then the teacher charged in, and made us drop everything and cut. 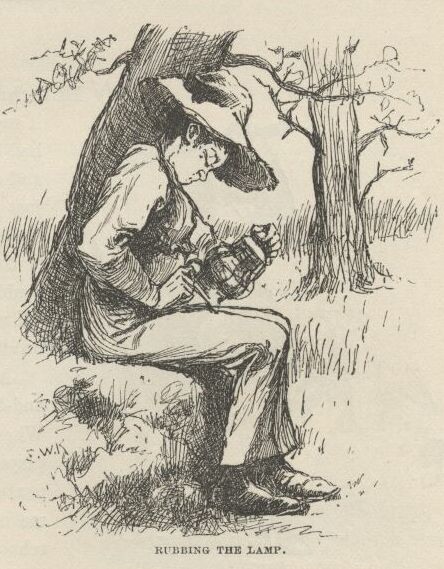 I didn’t see no di’monds, and I told Tom Sawyer so. He said there was loads of them there, anyway; and he said there was A-rabs there, too, and elephants and things. I said, why couldn’t we see them, then? He said if I warn’t so ignorant, but had read a book called Don Quixote, I would know without asking. He said it was all done by enchantment. He said there was hundreds of soldiers there, and elephants and treasure, and so on, but we had enemies which he called magicians; and they had turned the whole thing into an infant Sunday-school, just out of spite. I said, all right; then the thing for us to do was to go for the magicians. Tom Sawyer said I was a numskull.

“Why,” said he, “a magician could call up a lot of genies, and they would hash you up like nothing before you could say Jack Robinson. They are as tall as a tree and as big around as a church.”

“Well,” I says, “s’pose we got some genies to help US—can’t we lick the other crowd then?”

“How you going to get them?”

“Why, they rub an old tin lamp or an iron ring, and then the genies come tearing in, with the thunder and lightning a-ripping around and the smoke a-rolling, and everything they’re told to do they up and do it. They don’t think nothing of pulling a shot-tower up by the roots, and belting a Sunday-school superintendent over the head with it—or any other man.”

“Who makes them tear around so?”

“Well,” says I, “I think they are a pack of flat-heads for not keeping the palace themselves ‘stead of fooling them away like that. And what’s more—if I was one of them I would see a man in Jericho before I would drop my business and come to him for the rubbing of an old tin lamp.”

“How you talk, Huck Finn. Why, you’d HAVE to come when he rubbed it, whether you wanted to or not.”

“What! and I as high as a tree and as big as a church? All right, then; I WOULD come; but I lay I’d make that man climb the highest tree there was in the country.”

“Shucks, it ain’t no use to talk to you, Huck Finn. You don’t seem to know anything, somehow—perfect saphead.”

I thought all this over for two or three days, and then I reckoned I would see if there was anything in it. I got an old tin lamp and an iron ring, and went out in the woods and rubbed and rubbed till I sweat like an Injun, calculating to build a palace and sell it; but it warn’t no use, none of the genies come. So then I judged that all that stuff was only just one of Tom Sawyer’s lies. I reckoned he believed in the A-rabs and the elephants, but as for me I think different. It had all the marks of a Sunday-school.