This rumor has been a constant theme since vaccine roll-out, but has recently bubbled to the surface due to a constellation of events: external medical review in Florida on vaccines, videos released (called Died Suddenly), the death of a young prominent soccer reporter, the NFL cardiac arrest incident, the death of Lisa Marie Presley. In fact, every week “sudden deaths” that aren’t remotely related to vaccines go viral.

To be very clear: We have more evidence than for any other vaccine or disease in the history of humans that the benefits of Covid-19 vaccines greatly outweigh the risks.

I partnered with Dr. Kristen Panthagani, physician-scientist and author of You Can Know Things, to tackle this topic. This post is long, but we hope it’s a comprehensive, one stop shop to address the majority of rumors spreading now and in the future.

Deaths by vaccination status: It’s not even close

Underlying all these rumors is the belief that Covid-19 vaccines are seriously harmful, with some postulating that they are intended to depopulate the planet. If this fanciful rumor had any merit, we would expect those who are vaccinated for Covid to be more likely to die than those who are unvaccinated.

In fact, we see the opposite. The U.K. Health Security Agency recently released data evaluating all deaths (Covid-19, car accidents, strokes, etc.) in the U.K. by vaccination status, after adjusting for age. This is powerful data because it allows us to remove noise from the debate—it doesn’t matter if the death was “with” or “from” Covid or how the person died.


Below is the data visually displayed. And, the story is clear: vaccines save lives. (The impact has changed over time thanks to survivor bias, an increase in vaccination rates, and infection-induced immunity.)

What about excess deaths among young adults?

One of the first rumors that gained a foothold was from an observation by insurance companies: in the third quarter of 2021, deaths increased by 40% in working-aged individuals. Some latched onto this information as evidence that Covid-19 vaccines, which were rolled out earlier that year, were the cause of increased deaths.

This assumption leaves out one key detail — a pandemic. The Delta variant slammed the U.S. during the third quarter of 2021, killing people of all ages.

A new study assessed patterns of excess deaths and Covid-19 specific deaths across time, by state, region, and age. Scientists found that excess deaths increased starting in spring 2020 at the beginning of the pandemic, well before vaccines were introduced into the population. Furthermore, excess deaths tightly mirror Covid deaths, even for working-age adults. 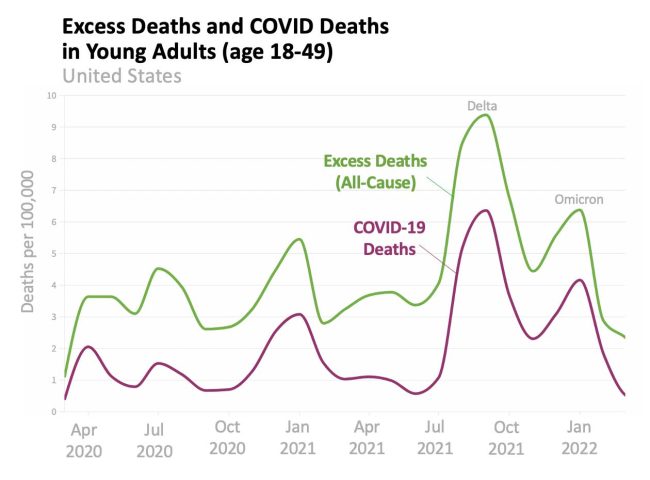 (If you’re wondering why there’s a gap between Covid deaths and excess deaths — according to the study’s lead author, Dr. Jeremy Faust, it’s likely “a combination of non-medical deaths like accidental overdose and also, we strongly believe, things like heart attacks that were actually instigated by Covid.”)


The tight link between Covid and excess deaths was seen even in Florida (see red arrow below), which has recently stopped recommending mRNA vaccines for men aged 18-39 based on a deeply flawed analysis. 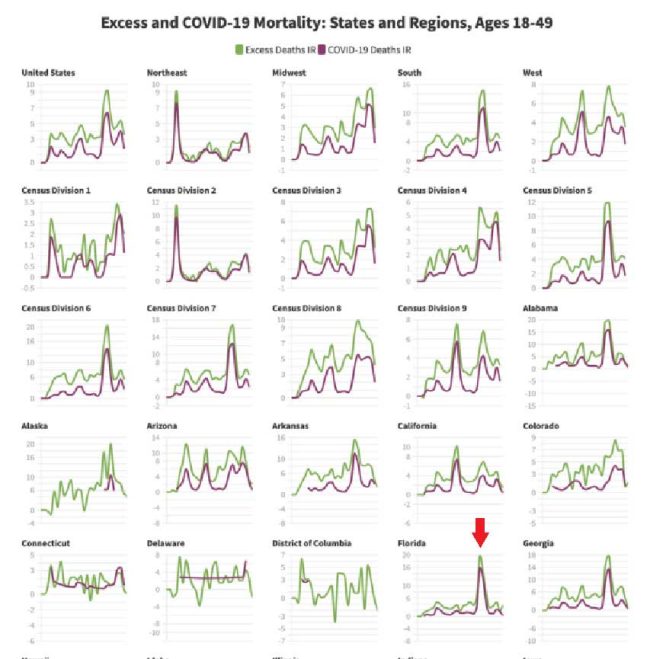 We can also look at specific deaths, like those classified under “diseases of the circulatory system”— which includes things like heart attacks and blood clots in the lung. Circulatory system deaths in 18-39 year-olds were decreasing before the pandemic, but then spiked sharply during the pre-vaccination period. Vaccination roll-outs correlated with a stunning reversal of this trend, as seen in the graph below.

What about young athletes?

Then there was the tragic injury in the NFL—Hamlin’s heart stopped after a hit to the chest. Within minutes, rumors flooded an information void to make the conversation about vaccines and death.

Where did this statistic come from? After digging, it surfaced that this came from a published letter by Peter McCullough in which he compared sudden cardiac deaths (SCD) in athletes from two data sets from two time periods. This study design can work in epidemiology; however, it has to be done very carefully to make sure we compare apples to apples. McCullough did not do it carefully and compared oranges to apples: compared young vs. old, compared different definitions of SCD, included people who didn’t even die from SCD in the first place, included some people who weren’t athletes, and included some people who didn’t even die.

It was a mess of an analysis. But that didn’t matter because the seed was sown. The rumor filled an information void, and it went viral.

What about blood clots?

Then there is the Died Suddenly video. This video flashes through dozens of upsetting news headlines and videos of people collapsing to paint an alarming picture of deaths after the Covid-19 vaccine.

We could write a whole post refuting this video (you can read this one). But a few quick things to take away:

What about all the personal stories of death after vaccination?

If you have spent much time on the internet, you’ve likely encountered stories of people saying a loved one died or was injured from the vaccine – their father got vaccinated and had a heart attack just a few days later.

As humans, we are wired to find cause and effect in our lived experiences, and the occurrence of a serious health event within days of vaccination appears to be fool-proof evidence of the negative effects of vaccination to many. But as painful as these stories are to hear, and even more so to experience, the reality is even if everyone had gotten a placebo, these stories are statistically bound to happen. Even if everyone had gotten a placebo shot, there still would be deaths after the shot. In order for there to be no deaths after vaccination, that vaccine would have to not only be safe, but actually prevent all deaths, from every cause.

To understand why, here’s a brief explanation of the post hoc fallacy and why it confuses many when it comes to vaccines:

What about the VAERS data rumors?

Then there are rumors of a possible cover-up after a FOIA (Freedom of Information Act) request from CDC’s VAERS database erroneously claimed clear safety signals for death after vaccinations.

In addition to the important nuances outlined in the video above, it’s important to take VAERS with a grain of salt. VAERS is a type of surveillance called “passive.” It’s run on an honor system that is dependent on people providing accurate data, which people knowingly (or unknowingly) don’t do. Because of this, the CDC has several disclaimers plastered throughout their site: “The reports may contain information that is incomplete, inaccurate, coincidental, or unverifiable.”


VAERS is imperfect, so we also have “active” vaccine safety surveillance called V-Safe. VAERS coupled with V-safe is incredibly powerful. Monitoring systems aren’t perfect, but they are pretty darn good. In fact, they were able to find some rare, but serious, side effects quickly during the vaccine roll-out.

What are the (validated) serious side effects from the Covid-19 vaccines?

When doctors say the Covid vaccines are “safe,” they don’t mean the risk of side effects is zero (no medical intervention can meet that standard)—they mean the risks of serious side effects are extremely small, and the benefits of the vaccine outweigh those risks.

There are true safety signals that have been legitimately linked to Covid-19 vaccines:


Not all of these vaccine-induced events were linked to death, but some were after intense investigations. For example, nine deaths have been causally linked to the clot complications from the J&J vaccine. In 2021, one study reported eight deaths from vaccine-induced myocarditis.

Weigh risk of vaccines with risk of infection

No one denies Covid-19 vaccines can have rare but severe effects. The question is how severe they are and how often they occur compared to infection.

Covid-19 vaccines have always been safer than infection. One study compared the immediate risks of a Covid-19 vaccine to an infection. With the exception of swollen lymph nodes, infections were far more predictive of heart arrhythmias, heart attacks, myocarditis, and blood clots.

The impact of Covid-19 infection on long-term problems is being uncovered more and more. Unfortunately, we are at the mercy of time for this to play out. But there are already several studies with concerning findings:

Across the globe, Covid-19 vaccines saved more than 20 million lives in the first year.

Safety in vaccines is incredibly important to monitor. Unfortunately, no vaccine is risk free. There are rare vaccine tragedies, and they need to be taken seriously. But do not confound these rare tragedies with thinking they are common occurrences. And certainly don’t forget that Covid-19 vaccines saved millions of lives across the globe and will continue to do so.

Kristen Panthagani, MD, PhD is an emergency medicine physician at Yale. In her free time, she is the creator of the medical blog You Can Know Things. You can subscribe to her newsletter here.

“Your Local Epidemiologist (YLE)” is written by Dr. Katelyn Jetelina, MPH PhD—an epidemiologist, data scientist, wife, and mom of two little girls. During the day she works at a nonpartisan health policy think tank and is a senior scientific consultant to a number of organizations, including the CDC. At night she writes this newsletter. Her main goal is to “translate” the ever-evolving public health science so that people will be well equipped to make evidence-based decisions. This newsletter is free thanks to the generous support of fellow YLE community members. To support this effort, subscribe here.