Housing prices in the United States rose almost 60 percent between 2012 and 2019, then another 45 percent between 2020 and the middle of this year. Now, with interest rates more than doubling to 7 percent in a year, the longest housing boom since the crash of 2007-08 is ending. The signs are everywhere, across the country, in the Florida and in Flagler County.

House prices are falling. So are the number of sales. Houses for sale are staying on the market longer. The supply of houses is rising. If the downward trend continues, the implications will have a pronounced ripple effect on a local economy still substantially dependent on construction and real estate, on demographic projections, on Palm Coast’s hopes of a westward expansion, and on the timing of school construction planned for later this decade.

By volume, total single-family home sales had averaged $131 million a month through August. In September, sales volume fell to $83.5, a 36 percent drop. But for an outlying month of June, when pending sales spiked, the number of pending sales has fallen in six of the last nine months, to 219 in September, the lowest level since April 2020.


For seven of the last 12 months, the median price paid for a house was 100 percent of the list price, pointing to how favorable the market was to sellers. In July buyers pulled back, paying 98.4 percent of list prices on average in July, 97.2 percent in August, and 97.4 percent in September.

Since early 2021, when the Flagler-Palm Coast housing market accelerated markedly, homes barely stayed on the market from 10 to 15 days before a contract. That wait was back up to 20 days in September–still favoring sellers (in 2018, the wait was between 50 and 65 days), but the trend is toward longer waits. The inventory of houses had fallen below 400 for most of 2021, bottoming out in spring at just over 200. It has nearly quadrupled since, though it’s still below the levels of 2018 and 2019, when the county’s inventory exceeded the thousand-home mark. In terms of supply, that means the county is approaching three months’ worth of housing, after falling below the single-month mark this spring: there are many more houses available, at lesser prices.

But there are also fewer buyers.

Assume Jill and June, a newly married couple moving to Palm Coast, are looking to buy a $350,000 home. Only a year ago, they could have gotten a 30-year fixed mortgage at 3 percent. Putting down 10 percent, their total monthly payment, with taxes and insurance, would have added up to $1,663. If they were looking to buy a house for the same price today, their interest rate would be 7.3 percent. Their monthly payments would be $2,376, or $713 a month ($8,556 a year) more, a 43 percent increase, or more than five times the cost of inflation in the same period. For many people, the jump is unaffordable. The choice is either to look for cheaper housing or to drop out of the home-buying market, further adding pressure on the rental market.


The 10 percent drop in median house prices has not been nearly enough to compensate for the cost of rising interest rate. Of 200 sales of single-family homes that closed in September, only 36 were in the $200,000 to $300,000 range, and only one was below that. The rest were in the $300,000 and up ranges. For those trying to sell the less expensive homes–and those trying to buy them–the growing strains are obvious: for them, the median time to contract has risen much more sharply than for more expensive homes.

The Flagler County school district is projecting building a middle school in two years and a new high school a few years after that./ Those projections are based on rapidly increasing enrollment, much of it also projected in the years ahead. But current trends point in the other direction: if wage-earners and young families are not able to afford local home prices, recent growth in that demographic will not continue as expected.

Some home buyers are retreating, but by no means all, especially in Flagler-Palm Coast where, for now, construction of new homes remains strong. But that growth has been powered by older, richer home-buyers, without children in schools. The following graph illustrates monthly permitting activity in Palm Coast for single-family homes and duplexes, through September: 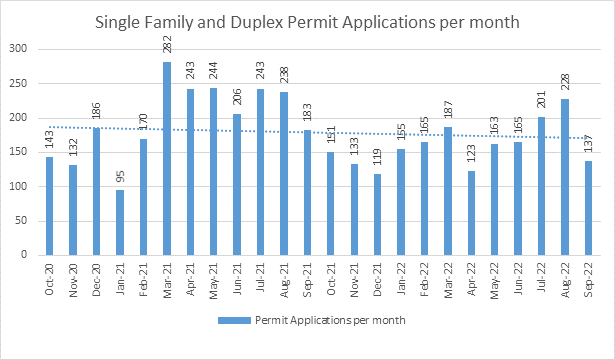 “We are at 100 so far for October,” Jason DeLorenzo, the city’s development director and chief of staff, said. “You can see from the graph that residential permitting is seasonal with declining permits in the fall/winter. This year is following the annual trend.” City and county regulatory pipelines are still busy with permitting new subdivisions, storage facilities and, to a lesser extent, apartment complexes. But the next few months will indicate whether the seasonal drop in permitting will start reflecting the broader slowdown in the housing market.

The same trends are repeated elsewhere. An analysis of Daytona Beach Multiple Listing Service (MLS) data by Wyse Home Team Realty showed that 307 existing single-family homes were sold in the Daytona Beach area with median home sales price of $370,000. That’s a nearly 40 percent decrease in total home sales from September 2021 and it’s 26 percent lower than home sales just one month prior. Total sales volume was down by 31 percent compared to September 2021 and was 31 percent lower than home sales volume in August.

But for those who don’t have a stake in the housing market, the future is more bleak. The Economist this weak features a freaked-out pumpkin with a jaggedly downward graph for a mouth, beneath the cover headline: “A House-Price Horror Show.” The paper predicts a global housing slump blamed on soaring interest rates. “When combined with a cost-of-living squeeze, that points to a growing number of households in financial distress,” the paper projects. “As an era of low interest rates comes to an end, a home-price crunch is coming—and there is no guarantee of a better housing market at the end of it all.”