Elizabeth Edwards died today in Chapel Hill. She was 61 and had been battling cancer, on top of her husband’s infidelities. On Monday, she’d written on Facebook: “I have been sustained throughout my life by three saving graces — my family, my friends, and a faith in the power of resilience and hope.” She added: “The days of our lives, for all of us, are numbered. We know that.”

Just before her death, our own Linda Lowen had written of Edwards in a long piece at her Women’s Issues site:

I’m a long-term ovarian cancer survivor, diagnosed relatively young. My mother died of liver cancer and came to live in my home for the last few weeks of her life. I lost two high school friends to cancer — one to non-Hodgkins lymphoma, the other to colon cancer. All these have been difficult to bear.

But Elizabeth Edwards’ story upsets me because of my friend Dana.

Like Elizabeth, Dana was a beautiful woman inside and out, as passionate about helping kids as a school guidance counselor as she was about raising her own three sons. We met when we were both pregnant with our first child. I was first to give birth but she followed me two weeks later, ending up in the same bed in the same room in the same hospital. Our respective second children were born 4 months apart. She had boys — I had girls.

[…] When she finally did see a doctor, no one expected that in her mid-40s, she’d be diagnosed with pancreatic cancer. When she was told the news that she only had 5-7 months to live, she wouldn’t allow those numbers to dictate how much time she had left. “I can’t leave Sam, ” she insisted. “He’s too little.” At two-and-a-half, her youngest son would probably not remember her if she passed away. And she was reluctant to send him off to a father who saw the boys infrequently at best.

So she vowed to stay with him until he was 5 years old. And against all odds, she beat the illness back for years. Just like Elizabeth.

[…] I had been the first one to give birth and the first one to have cancer. I had always been the one to go first. But my cancer had been cured and I knew I’d live to see my children reach adulthood. This time, she was going first. […] Yesterday, when Elizabeth Edwards wrote on her Facebook Wall, “The days of our lives, for all of us, are numbered. We know that,” she reminded me that when we reach the point at which those days are clearly finite and drawing to a close, the count no longer matters to us. She knows this too: ” I have found that in the simple act of living with hope, and in the daily effort to have a positive impact in the world, the days I do have are made all the more meaningful and precious. And for that I am grateful.”

[…] What would Dana have written on her Facebook page if social media had been around during her lifetime? It’s a question I never considered until Elizabeth Edwards posted her final thoughts: “It isn’t possible to put into words the love and gratitude I feel towards everyone who has and continues to support and inspire me every day. To you I simply say: you know.”

On Monday (Dec. 6) the Flagler County Commission elected its new chairman for the year. It’s Alan Peterson, who left the Palm Coast City Council two years ago when it became relatively apparent to him that he might not get to be mayor over there. Commissioner Milissa Holland moved to name him the next chairman. The rest of the commission went along unanimously. Holland also nominated Barbara Revels vice chairman, which puts Revels in line to pick up where Peterson will leave off next year. Peterson was nominated more or less according to an unspoken rotation that eventually lets every member of the commission serve a term, though for some a re-election may be necessary to coincide with the rotation. That was the case with Bob Abbott, the man who would have been chairman had Nate McLaughlin not defeated him. There is, occasionally, a god: imagine that–a county commission chaired by Abbott, who managed to be a four-year no show despite warming the seat he occupied at the fringe, in every sense, of the five-member panel.

The chairmanship of the commission really amounts to no more power than that of any other commissioner. But it does accrue more burdens. The chairman is required to sign all official county documents, appear at innumerable (and innumerably insufferable) functions, make equally innumerable (and fairly insufferable) speeches, and of course run commission meetings and workshops, which on occasion have been known to have a few drips in common with Chinese torture. Unlike the Palm Coast City Council, which has been increasingly run by the city manager, it takes a man–or a woman–with a special temperament to run a smooth Flagler County Commission meeting. Calling those commissioners hands-on is an understatement. It’s not at all sure that Peterson has that temperament: he’s too smart, and therefore too irascible, for mere ceremony. He loves debate almost as much as he loves numbers, which may make the constraints inherent in the commission chairmanship something of a clutch on his instincts–or on those of his colleagues, if Peterson chooses to exercise his gavel less lightly than George Hanns, his predecessor–whose graciousness was such that it forgave his frequent verbal slips–did.

One certainty: it won’t be dull.

Palm Coast Fire Chief Mike Beadle this week announced the death of Volunteer Firefighter-Paramedic Frederick Robert Gleissner. Gleissner died in traffic accident on Friday (December 3) on I-95 near Ormond Beach. Gleissner began as a volunteer with the Palm Coast Fire Department in 2009. He was assigned to Station #24 on Palm Harbor Parkway. He recently graduated from Daytona State College, completing the Firefighter Minimum Standards course.

Gleissner was born on April 27, 1986 in Long Island, N.Y. He was a graduate of Flagler Palm Coast High School, where he played on the varsity lacrosse team. He was also a graduate of Florida State College with a bachelor’s degree in criminology, and of Daytona State College with degrees in the fire science and paramedic programs. He leaves behind a family devastated by his passing, including his parents, Frederick and Diane Gleissner of Palm Coast (Frederick is retired from the New York City Fire Department) ; brother Greg of Palm Coast; maternal grandmother Lucy Dolce of Palm Coast; Fiancé Valerie Davis, and many loving aunts, uncles, cousins and friends. Visitation were held on Dec. 6 at the Craig-Flagler Palms Funeral Home, and a mass was scheduled for today (Nov. 7) at Saint Elizabeth Ann Seton Roman Catholic Church on Belle Terre Parkway.

On Monday, President Obama caved in more than wimpily imaginable as he agreed to a GOP demand to extend all of the Bush tax cuts for at least two years and a cut in the payroll tax, from 6 to 4 percent. The cost to the Treasury: an additional $900 billion. That’s fiscal responsibility for you, the Republican way. The same Republicans who have been screaming bloody murder over debt. Yet the overwhelming majority of the public is in favor of repealing all or some of the Bush tax cuts. Just 33 percent of those queried in the latest Pew poll want them all preserved. Obama’s approval rating in the face of all this wilting? 43 percent. See the full poll. 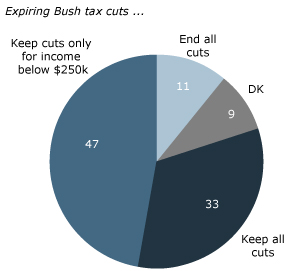 From Findlaw: The case, taken up by the Supreme Court, involves the “exigent circumstances” exception to the Fourth Amendment’s requirement that, before conducting a search, police must first procure a warrant from a neutral magistrate. In the case before the Court, which, surprisingly, did not involve the Bunnell Police Department, police knocked on the door of an apartment that smelled of marijuana (and that they had misidentified as being the apartment where a drug dealer they were chasing had taken refuge) and announced their presence. Then, the police heard movement inside the apartment — which they interpreted as the sound of evidence being destroyed. The police thus forced their way into the apartment. Later, in court, the police invoked the “exigent circumstances” exception to the Fourth Amendment to justify their conduct, on the ground that if they had not entered when they did, the evidence would have been gone by the time that they could return with a warrant. The Fourth Amendment issue here arises because, had the police not knocked and announced their presence, the evidence might never have been destroyed at all. Columnist Sherry Colb considers two possible tests that courts have used to determine whether a police-created exigency like this one can fit the exigent circumstances exception, and contends that one is superior and should be adopted by the Supreme Court. Read the column.

Reza Aslan and Jack Miles are among the world’s most interesting minds when it comes to the meaning of religion in the context of political presumptions. Miles is the author of God: A Biography, Aslan is the author of No god but God, a breezy history of Islam, and How to Win a Cosmic War: God, Globalization, and the End of the War on Terror , which demolishes the notion of a clash of civilizations. Here they are in conversation, compliments of the University of California:

Blogger Rising Hegemon has a great little list going: Banned Words of 2011. The blog will eventually choose the top 10 banned words. Here’s the list. By all means, add your own.