Natalie Cordone and Shawn Kilgore have been performing their jazzy blend of wit, pop and vocal standards nationally and internationally for about five years, comparing their music to a blend of “the comic chemistry of Judy Garland and Mickey Rooney with the vocal stylings of Michael Buble and Barbra Streisand.” And next Tuesday (Dec. 10), they’re bringing their “Swing in the Holidays” show of holiday hits for one night only at the Palm Coast Community Center, at 7 p.m. 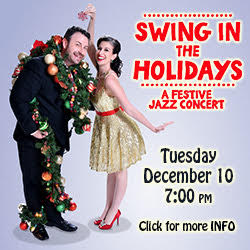 Cordone and Kilgore will be backed up by a trio of seasoned musicians.

“Swing in the Holidays” is produced in to Palm Coast by Sullivan Specialties, a business owned by Hammock residents Janet Sullivan and Peter Wentworth. Sullivan Specialties owns a theatrical costume rental company and a musical saw manufacturing and sales company, both based in Illinois. Sullivan produced small shows in Illinois, using local talent. She wanted to try her hand at bringing small, professional, entertaining shows to Palm Coast, where there’s been growing appetite for the performing arts.

“Palm Coast residents love theatre and music,” Sullivan said. “They love the small, intimate experiences at Flagler Playhouse and City Rep where they can interact with the actors and singers afterwards and they love the professional shows at the Flagler Auditorium. I want to try to blend the two.” City Repertory Theatre is the small company at City Walk that has been producing more than half a dozen shows a year for the past decade, many of them musicals. The stage of the Palm Coast Arts Foundation in Town Center has also been getting busier.

Sullivan reached out to friends in New York for recommendations of professional holiday shows that were already created. After looking at several options from throughout the country she landed on Cordone and Kilgore. “I immediately knew the audience would have a great time with Natalie and Shawn and the trio, and that is my priority. I can’t wait for Palm Coast to see them,” Sullivan said.

Cordone and Kilgore met several years ago when they were both cast in the Tony Award-winner, “Baby.” After weeks of sharing harmonies and laughter they knew they had chemistry. They began creating their own shows to showcase their personal vocal stylings and comic timing. They’re based in Orlando, but Cordone and Kilgore tour the country starring in musicals, performing their own shows, and singing with various orchestras from Las Vegas to Texas to New York.

“Between shows, you can find Cordone & Kilgore as soloists with various symphonies, starring in musicals, hosting events for Fortune 500 companies, bringing life to characters in new works and voicing audiobooks,” their web page states. “In their limited free time, they love relaxing with family or playing with their five dogs in Orlando.”

“Swing in the Holidays” is Tuesday, December 10, at 7 p.m. at the Palm Coast Community Center. Tickets are $22 and can be booked easily online here.