Tuesday evening I covered the “Town Howl” that County Commissioner Joe Mullins and Flagler Humane Society Director Amy Carotenuto hosted at the society’s building. It was an impressive performance by both–measured, thoughtful, probing with the right questions. Mullins’s intentions to possibly amend an ordinance the commission passed two months ago are clearly sincere. The ordinance allows dog-chaining under many circumstances, though the trend in more enlightened laws of the sort are toward more restrictions on the practice. Mullins seems to prefer that direction to the one the ordinance took, though he voted for it. He appears willing to change his mind. It’s the mark of a wise, non-dogmatic politician.

Why, then, Mullins insists on being vulgar, offensive, dogmatic, not to mention demeaning to the office and constituents he represents, is beyond me. There seems to be two Joe Mullinses. One of them is hard-working, challenging, interesting and unpredictable in the best ways.

The other is–well, it’s the sort of Mullins who thinks it perfectly acceptable to tell a woman, as he did this morning, referring to the Town Howl: “Sorry you didn’t make it. We did decide to chain and muzzle all radical liberals in the county.” He dropped that comment in a thread on the FlaglerLive story about Tuesday’s meeting, on that woman’s Facebook page. It was inexcusable on many levels, and it flies in the face of Mullins’s own efforts to deal with the dog-chaining issue seriously and, obviously, in a non-partisan way. It is also emblematic of a recurring issue with Mullins and his interactions with constituents.

In a text to me this morning, Mullins called it sarcasm. Really? Let’s see. Mullins is participating in the sheriff’s summit on domestic violence or sexual abuse. Would he make a joke about rape? About keeping liberal women in their place? About St. Paul’s Ephesians howler applying to liberal wives? Of course not. He talked about human trafficking at the Public Safety Coordinating Council meeting he chaired Wednesday. Would he have joked about keeping liberals in bondage? Trafficking little liberal children to Gotham? Of course not. He’s holding one of his opioid task force meetings. Would he joke about wishing liberals OD’d on Trump for a change? Would he joke about denying Narcan to a liberal passed out on fentanyl? Of course not. He’s holding a town hall at the African American Cultural Society. Would he make jokes about lynching liberals?

Why go so far: imagine how he feels seeing his name in the headline to this piece, as inappropriate a headline as any. After all, it’s all lol, as he wrote after his “joke,” as he always writes after his “jokes,” as if in self-ordained absolution.

Lol my foot. Yet he sees no problem joking about muzzling and chaining liberals on a thread to a story about the cruelty of dog-chaining, 48 hours after he along with everyone else at that meeting deplored images of dogs tortured by chains. The allusion to liberals as dogs–as bitches–is not lost on anyone.

“I have a first amendment right to respond any way I like,” he tells me in a text. (You can read the full text thread between Mullins and me in the sequential images accompanying this piece.) “Or does that just work for you all?”

He’s the one “joking” about muzzling liberals, yet accusing liberals of silencing him the moment his attempt at humor is merely challenged for being misplaced. How rich. But that’s how it often is in what passes for debates anymore where ideology corrupts all: challenge a conservative on any point whatsoever, and the deflective, Pavolvian response–in keeping with the theme of the day–is the inevitable you’re censoring! You’re trying to shut me up! God forbid you should address the actual point of the challenge.

The point is this: Mullins is not a private citizen. He is an elected official, presuming to speak as one. But he willfully ignores the distinction, as if he were two people. He’s not. And he can’t be constantly chalking up his inappropriate language to just Joe being Joe, or to a novice politician learning the ropes. He’s no novice anymore. Neither excuse works. We expect better.

Mullins did inform me that the woman on Facebook he made the chaining comment to has been baiting him and dropping comments insulting to him and Trump on his Facebook page for a while. “They have even made what I feel is threats by asking if my 4 year old child’s trump book bag is bullet proof. If you support that, and think I should sit back and continually take these shots then you are thinking wrong,” he wrote.

The politician’s art of stuffing words in his challengers’ mouths is generally as well honed as his love of straw men. I have no idea what this woman, or “they” have been writing on Mullins’s Facebook page, though if anyone is so much as hinting about or alluding to Mullins’s children in any political context, let alone making veiled threats, they’re being vile. The rare times I’ve ventured onto Mullins’s Facebook page gave me the sort of reaction my health plan isn’t good enough to treat, so I stay away, though the couple of screen shots he sent me this morning are stupid liberal memes about Trump’s impeachment issues, none of which are new, original, interesting or even daring. Nothing remotely in the league of Mullins’s statement about chaining liberals, for instance.  And of course I would never suggest that he should sit back and take the shots: debate to your heart’s content, though if he felt his child was being threatened, I’d have immediately taken that to law enforcement (as I do when I or my family members are the occasional subject of threats, however vague).

Again, Mullins is brandishing a straw man, missing the point. Politicians get baited, goaded, insulted. That doesn’t mean they respond in kind. Not if they claim to be, as Mullins so often does–as he did Tuesday night–representing everyone. His actual line even on Tuesday night was: “If right now 80 percent of this county wanted pink mailboxes and I hated them, I’m going to have to accept pink mailboxes, because if I’m really representing you.” 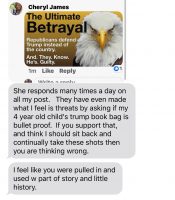 If you’re representing us Joe, all of us, then act like it, whether the pink is on our mailboxes, in the color of our briefs or on our political tendencies. You showed on Tuesday night, as you have many times elsewhere, why you can appeal to broad coalitions and why you can be sincere–and effective–when you claim to see past partisanship or petty political fooleries. But don’t go undermining your own message by then acting like a playground bully, stooping to every bait in the book and responding in kind. You don’t want Joe Mullins to become synonymous with lol.

Here’s a suggested rule of thumb, Joe. Just a suggestion: if you ever feel the need to add an lol at the end of a line you’ve just written, you probably shouldn’t publish that line. Take that lol as the better angel of your natters: your angel is telling you something. Heed it. You’ll be amazed at the results. So will we all, whatever our stripes. It’s called statesmanship, and it’ll reap you more than any millions you can imagine.

Pierre Tristam is FlaglerLive’s editor. Reach him by email here or follow him @PierreTristam. A version of this piece aired on WNZF.