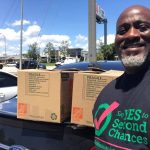 The Florida law enacting Amendment 4 “unconstitutionally punishes a class of felons based only on their wealth,” the 11th Circuit Court of Appeals ruled in a unanimous decision. But it applies only to 17 felons named in the suit for now.

DeSantis praised the nominations of Lagoa and Luck for seats on the 11th U.S. Circuit Court of Appeals in a statement issued by his office. The governor appointed the pair to the Florida Supreme Court shortly after he took office in January.

The 11th Circuit Court of Appeals declared an executive order by Riock Scott to drug-test 85,000 state employees and all job applicants as mostly unconstitutional, but left room for a lower court decision to be rewritten to allow for certain employees in certain categories to be drug tested–essentially restoring Florida’s drug-testing standard to what it was before the governor’s executive order.