Supervisor of Elections Kimberle Weeks sustained severe criticism in the past year over budget issues and her clashes with the Flagler County Commission. But Commission Chairman George Hanns, who is also one of the three members of the county canvassing board (Weeks and Circuit Judge Sharon Atack are the others) had only praise for her after Tuesday’s primary. “The operation went very smooth as far as Ms. Weeks’ office went,” Hanns said, “her employees were on the move constantly and seemed to be well organized, and the election in my opinion went off like a well-oiled machine.”

The first release of numbers shortly after 7 p.m. was slightly confusing as tallies pointed to all 35 precincts being counted, when in fact just over half the ballots had been counted. But all ballots were tallied and the results posted at 8:34 p.m., even after several thousand had to be re-counted. 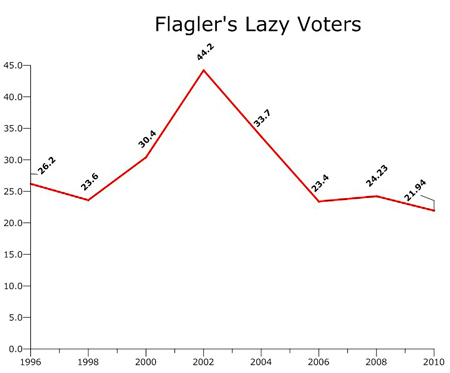 One factor helping the rapid count: a dismally low turnout. Just 14,100 voters out of Flagler County’s 64,277 registered voters cast a ballot, for a turnout of 21.94 percent. That’s the lowest turn-out since computer records have been kept, beginning in 1996. The 2006 primary, also an off-year election, had produced the lowest turn-out until yesterday, at 23.4 percent.

A precinct-by-precinct analysis shows that voters were likeliest to vote in whiter or richer precincts. They were least likely to vote in poor and black neighborhoods.

That’s the usual trend in elections. White, older and richer voters go to the polls in larger proportions across the country. There was reason to think this primary would buck the trend at least a little, because three black, high-profile candidates were in local races–Sid Nowell and Marc Dwyer in the circuit judge race for Kim Hammond’s circuit court seat, and Raven Sword in the District 5 race for school board. If any of those candidates were counting on a heavier black turnout, they didn’t get it.

The top five precincts by turn-out, which got between 32 percent and 34 percent, were the Haw Creek Community Center in the western part of the county, Grand Haven Village, Beverly Beach, the Palm Coast Yacht Club and the Portuguese American Club.

In sum, whiter, richer precincts turned out at nearly double the rate of precincts where voters tend to be poorer, and black populations larger.

Overall, Fischer won 26 precincts to Sword’s seven. They tied in one precinct. Generally, where Fischer won, he won with comfortable leads. For example, he won with more than 50 percent of the vote in six of those precincts, including 58 percent at the Haw Creek Community Center in western Bunnell, 56 percent at the Flagler Beach Community Center, and 57 percent at Santa Maria Del Mar in Flagler Beach. (Fischer, a Catholic, drew heavily on Catholic congregations.)

Sword in comparison did not win a single precinct with 50 percent or more. Her best result was 46 percent at the Indian Trails precinct, and 45 percent at the St. Thomas Episcopal Church precinct. St. Thomas Episcopal happens to be the church former school Board member Jim Guines attends. Guines is Sword’s campaign manager. Sword also won the African American Cultural Center precinct, but not by much: 42 percent, to Fischer’s 38 percent. She won at the Belle Terre Elementary precinct, adjacent to Indian Trails. The two candidates tied at the Buddy Taylor Middle School precinct, which takes in neighborhoods east of Belle Terre and north of State Road 100.

The third candidate in that race, Peter Peligian, did not win a single precinct, though he tied with Sword at the Rima Ridge polling station, with 34 percent there. That polling station drew the second-lowest number of votes in that school board race, out of the 35 precincts, with just 56 votes cast. Peligian and Sword got 19 each, Fischer got 18.

In the race for the Flagler County-based 7th Circuit Court judge seat held by Kim Hammond, Marc Dwyer won 19 precincts. He tied one, with Sid Nowell, who won five precincts. Dennis Craig won eight precincts, Joe Horrox won just one. In the end, Craig and Horrox, on the strength of their votes in Volusia, St. Jons and Putnam counties, eliminated the four other candidates in the race. Their race will be decided in a run-off on Nov. 2. So will the race between circuit court candidates Don Holmes and Scott DuPont. In the third 7th circuit race relevant to Flagler residents, Matt Foxman beat George Pappas outright.

Election Turnout: Who Voted Most and Least