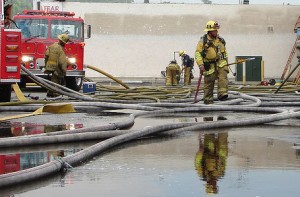 Rep. Janet Adkins, R-Fernandina Beach, proposed firefighters have their BMI tested every four years as an additional requirement to existing physical agility testing. “Right now we’ve got firefighters who are physically fit, with a BMI of 25 or less, that are being asked to do above and beyond the work of those who are not able to do it,” Adkins said. But a number of representatives expressed concern about the BMI rating system because it doesn’t calculate fitness of individuals, and can be misleading, particularly with highly muscular people.

Curiously, the amendment did not address the weight issues of police or law enforcement personnel. (“Mike and Molly,” a popular television show on CBS, currently features a morbidly obese character who works for the Chicago Police Department.)

According to the Centers for Disease Control, more than one-third of U.S. adults (35.7 percent) and approximately 17 percent (or 12.5 million) of children and adolescents aged 2—19 years are obese. The CDC does not track weight proportions among firefighters. The rate in Florida is 26 percent, according to self-reported numbers.

The amendment was proposed for a measure (SB 1410) that refines the duties of the State Fire Marshal, and among other changes would make it a felony to impersonate a volunteer firefighter. No final vote was taken on the underlying bill; that is expected on Tuesday.

–FlaglerLive and the News Service of Florida