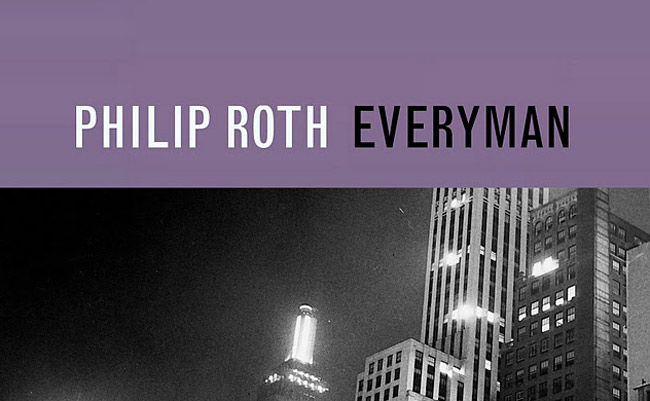 You never know his name, the hero of “Everyman,” Philip Roth’s latest novel. And why should you? He begins his story from his Newark grave, dead a few days, ready to receive that first splash of dirt from one of his children, his daughter Nancy or his sons Randy and Lonny, from one of his three wives but none of his roster of mistresses (this is no Mitterand funeral), from the few advertising colleagues who’d driven up to see him off but not including Clarence, the executive vice president who’d ordered him to use one particular 19-year-old’s apartment rather than the office for his “office trapeze acts in which everyone has everything to lose”—Clarence had preceded him to the box. No one cares for him exactly, except maybe Nancy and the heavyset nurse no one had invited to the gravesite, but who had cared for him after his heart surgery, and who “let the dirt slip slowly across her curled palm and out the side of her hand onto the coffin, the gesture look[ing] like the prelude to a carnal act.” Not that anyone would suggest they get a room. Not that anyone could guess that he could be cared for, deeply. “As if there weren’t already fewer and fewer people present who meant anything to him,” he had remarked to himself, not far removed from the grave. “But decomposing families was his specialty.” They would now pay him back. A few symbolic dust-to-dust gestures to greet his own decomposition’s RSVP, and that would be it. One of five hundred funerals like his up and down New Jersey that day. Nothing spectacular. Nothing memorable, except the gone-ness. “But then it’s the commonness that’s most wrenching, the registering once more of the fact of death that overwhelms everything.”

The reader of course is the other uninvited guess at graveside, paradoxically the guest of honor who ends up caring most for the dead guy because this is Roth writing the Eulogy from behind the ordinariness, the Roth who reads hearts like America’s best social cardiologist (a wonder his heart hasn’t given out from overwork) and who keeps defying the odds of the American writer supposed to lose his powers — to booze and fame and fat and advertisements for himself — at the tail-end of his sixth decade at most. But here he is, 73 years old and writing like it’s still a midday office tryst he can pull off with as much virility as Portnoy in his prime, style, tempo, arias and clarity all there, hold the liver.

“Everyman” was a Renaissance play, of course, Flemish, Dutch or English—let the pedants decide which—where death is death and Everyman the character who tries to evade it, bargain with it, eventually submit to it in an early, truncated version of the 12-step program that implores its drinkers to do good while they have a chance, or be punished, but with the usual humorless twistlessness of morality plays. Roth’s “Everyman” isn’t soggy with lessons to learn. It’s an elegy for lessons never learned to some extent: we all have limitations, some of us more than others. Roth’s Everyman is all limitations. But it’s mostly an elegy to aging, sickness and dying, a successful attempt to announce that in the end nothing but submission will do no matter what bells and whistles are brandished along the way: “He’d married three times, had mistresses and children and an interesting job where he’d been a success, but now eluding death seemed to have become the central business of his life and bodily decay his entire story.” There’s nothing much to learn from that except to take conscience of it, which to a remarkable extent our culture is designed in every way not to do. Death and dying are greater terrors than if every al-Qaeda cell were carousing in one’s body. Roth defiantly faces the terrors, describes them, makes himself be those cells carousing inside his Everyman’s body, like those characters in “Fantastic Voyage,” the 1966 movie where “a surgical team is miniaturized and inserted into a dying man” (as goes the Amazon plot summary). Roth is the surgical one-man team. And unlike the Renaissance play, he’s much funnier about it, Roth being incapable of writing anything without being funny (“Writing a will—that was the best part of aging and probably even of dying”), even if it’s merely to subvert the order of what we’re fated to.

So his Everyman begins in the grave, we find out over the course of the next 182 pages, finally relieved of the burden of aging, of battling sickness after sickness, a weak heart physically, a badgered heart emotionally, most of the blockages from self-inflicted wounds, a history of infidelities, mangled loves, betrayed children, overanxious passions and underwhelming generosity. John Updike’s aging characters never make it past the first third of their novel without remarking about their faintly disagreeable body smell. Everyman exudes a smell of regret and maybe a smear of self-pity. “Well,” Nancy tells him after doing her bit with a clod of dirt, “this is how it turns out. There’s nothing more we can do, Dad.” This from the one who came closest to loving him as one hopes one’s child would, with at least a hint of the unconditional. “There’s no remaking reality,” she tells him. “Just take it as it comes. Hold your ground and take it as it comes.”

He’s holding his ground now, though for all his flaws, you wish he didn’t have to go: it’s not just him being buried. The title suggests it without subtlety. Roth pulls it off subtly enough: Who has known even the beginning of aging and not felt the anguish of a life closing on jobs half-done, undone, badly done, and hurried down that unstoppable conveyor belt by bodies designed to fail and too quickly be transformed “into a storehouse for man-made contraptions designed to fend off collapse”? Who hasn’t known, or won’t soon know, “the vitriolic despondency of one once assertively in the middle of everything who was now in the middle of nothing. Was himself now nothing, nothing but a motionless cipher angrily awaiting the blessing of an eradication that was absolute”? Everyman is an unattractive character in the main, in the way he conducted himself with his children and his wives. But this slump of his into desperate self-pity, rather than surrender to bingo and crafts and “swapping of medical data” with the other elderly broods waiting for the final call isn’t narcissism on Everyman’s part, or indulgence on Roth’s (as I think the Times’ Michiko Kakutani, in her bitchy, impatient review of the book saw it). The point of literature is neither to please nor—heaven forbid—to create likable characters with whom to “identify.” It is to lay bare the (I can’t resist citing across the shelf, if it’s precision that counts) “human stain.” Roth does. His Everyman is a stained man:

Nothing any longer kindled his curiosity of answered his needs, not his painting, not his family, not his neighbors, nothing except the young women who jogged by him on the boardwalk in the morning. My God, he thought, the man I once was! The life that surrounded me! The force that was mine! No “otherness” to be felt anywhere! Once upon a time I was a full human being.

How different is that from this, from “Patrimony,” Roth’s requiem for his father:

“So there it is,” I said. Anybody’s helplessness is difficult, a child’s, a friend’s, but the helplessness of an old person who once had such vigor…”
“Especially of a father.”
“Yes. He’s fought such a long”—and the adjective that came to me was not one I’d ever thought to associate with his efforts, however much I’d always respected his gumption—“long, long distinguished battle.” The word’s utter aptness took me by surprise.

The difference is that Everyman had no such son as Roth to pick up his shit (“There was my patrimony: not the money, not the tefillin, not the shaving mug, but the shit”—who can have read that line in “Patrimony” And ever forget it?), though who would have guessed that Roth would be the sort to pick up shit in the first place? To quote from “The Human Stain,” it comes down to this: “For all that the world is full of people who go around believing they’ve got you or your neighbor figured out, there really is no bottom to what is not known. The truth about us is endless. As are the lies.” Everyman may or may not have made his bed entirely on his own. Who ever does, anyway? But the truth about him is endless. Roth lets us in on a few. They’re not all vain or mean or selfish. And in the end they’re nothing to warrant the loneliness one is left with in those moments, months or years that fly like moments, before the grave: “Old age isn’t a battle. Old age is a massacre.”

If mourning requires no love, Roth at least provides understanding.