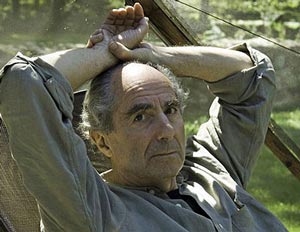 The Great American Novel (1973) is one of Philip Roth’s lesser known, more disheveled novels, though it remains one of the best baseball novels ever written. It’s the story of the Rupert Mundys, a big-league baseball team that spent World War II perpetually on the road once the military took over its home field. Because it’s Roth, it’s also the story of baseball in the American imagination as Roth imagines America, which tends to be closer to the reality of America than the stud-spangled fantasy the rest of us invent for ourselves. It’s baseball as a sport of contact with its own mythologies and those of America’s literary gods and libidinous obsessions — Melville, Hemingway, Hawthorne, bigotry, anti-communism, sex (“But this is not a book about tough cunts,” Smitty writes in his prologue. “Nat Hawthorne wrote that one long ago”). The book is difficult to follow in parts, but it’s meant to be. It’s a baseball game in hardcovers (or softcovers, if you want the savings.) As in a baseball game, preferably not on cacophonous ESPN, your mind can wander off and return without missing more than peanut shavings. When something more riveting does happen than tales of balls and pop-ups, Roth seizes you by the eyeballs and doesn’t let go. Here’s one of those gems. Early in the book Smitty (“Call me Smitty” is the book’s whale of an opening line) goes on one of his Whitmanesque soliloquies—about farts. Read it out loud. It’s worth every sound and anything else your senses care, for nostalgia’s sake, to imagine. —PT

Kids love farts, don’t they? Even today, with all the drugs and sex and violence you hear about on TV, they still get a kick, such as we used to, out of a fart. Maybe the world hasn’t changed so much after all. It would be nice to think there were still a few eternal verities around. I hate to think of the day, when you say to an American kid, “Hey, want to smell a great fart?” and he looks at you as though you’re crazy. “A great what ? ““Fart. Don’t you even know what a fart is? ““Sure it’s a game—you throw one at a target. You get points.” “That’s a dart, dope. A fart. A bunch of kids sit around in a crowded place and they fart. Break wind. Sure, you can make it into a game and give points. So much for a wet fart, so much for a series, and so on. And penal-ties if you draw mud, as we called it in those days. But the great thing was, you could do it just for the fun of it. By God, we could fart for hours when we were boys! Somebody’s front porch on a warm summer night, in the road, on our way to school. Why, we could sit around a blacksmith’s shop on a rainy day doing nothing but farting, and be perfectly content. No movies in those days. No television. No nothin’. I don’t believe the whole bunch of us taken together ever had more than a nickel at any time, and yet we were never bored, never had to go around looking for excitement or getting into trouble. Best thing was you could do it yourself too. Yessir, boy knew how to make use of his leisure time in those days.”

Surprising, given the impact of the fart on the life of the American boy, how little you still hear about it;  from all appearances it is still something they’d rather skip over in The Canterbury Tales at Valhalla High. On the other hand, that may be a blessing in disguise; this way’ at least no moneyman or politician has gotten it into his head yet to cash in on its nostalgic appeal. Because when that happens, you can kiss the fart good-bye. They will cheapen and degrade it until it is on a level with Mom’s apple pie and our flag. Mark my words: as soon as some scoundrel discovers there is a profit to be made off of the American kid’s love of the fart, they will be selling artificial farts in balloons at the circus. And you can just imagine what they’ll smell like too. Like everything artificial.

Yes, fans, as the proverb has it, verily there is nothing like a case of fecal impaction to make an old man wax poetic about the fart. Forgive the sentimental meandering.