The Florida Legislature timed a suspension in the 25-cents state gas tax this year to coincide with the run-up to the general election on Nov. 8. The suspension of the tax was in effect through October. It ends at midnight tonight.

The average gas price in Florida was $3.286 a gallon for regular unleaded today (Oct. 31), about 10 cents cheaper than at the end of September. The suspension of the tax kicked in only a few days before gas prices started rising again, after OPEC-Plus, the oil cartel led by Saudi Arabia and Russia, agreed to slash production to increase prices again. But the increase wasn’t especially pronounced, though it erased what relief may have been gained from the gas tax cut.


Average prices in Flagler County today were in the $3.25 to $3.30 range. By Tuesday morning, they will have increased 8 percent, to 3.50 to $3.55 a gallon, absent other market effects. In essence, what Florida lawmakers like to call a gas-tax “holiday” is ending just ahead of the holiday season.

“While Halloween is traditionally a time for filling bags with candy, drivers may also want to fill their gas tank to take advantage of current prices at the pump,” said AAA spokesman Mark Jenkins.

Gas prices for the month of October averaged $3.33 per gallon. That’s about 6 cents less than what the price was on September 30th.
In Flagler-Palm Coast on Monday, gas along Guzzlers’ Alley on State Road 100 was selling at $3.25 or within a few cents of that at most stations, including WaWa and RaceTrac, and more consistently around $3.29 a gallon along Palm Coast Parkway. Prices stay in that range down I-95 around the intersection with U.S. 1, but to those willing to make the trip to LPGA Boulevard in Holly Hill, they could get a taste of below-$3-a-gallon gas: both Buc-ees and Sam’s Club are selling unleaded regular for $2.98 a gallon today, according to Gas Buddy’s latest reports. And BJ’s, the wholesale club in Port Orange, is selling at $3.02. (A BJ’s is soon to begin construction on State Road 100 in Palm Coast.)

Florida gas prices declined 7 cents last week, pushed down likely by yet another draw from the nation’s Strategic Petroleum Reserve ordered by President Joe Biden: both political parties are manipulating prices to the extent that they can ahead of the election.


The reserve, held in salt caverns in Texas and Louisiana, was created by Congress in 1975 after the 1973 Arab oil embargo. The Ford Administration’s goal was to store 500 million barrels of oil. Jimmy Carter soon after his election in 1976 promised to double the storage by 1985. By 1979, it still contained only 91 million barrels because of construction and bureaucratic delays, but by the mid-1980s the goal of half a billion barrels was met and exceeded, nearing 750,000 barrels by 2010, its maximum storage capacity. It has fallen since, but remained above 600 million barrels–until Biden started drawing it down. . after the 1979 oil shock, when oil prices surged. By 1985 has contained normally contained over 600 million barrels of oil. It is now just above the 400 million barrel mark, its lowest level since 1984, when it was being built up. It’s still about a year and a half worth of supplies in net imports of crude oil. But it remains up to the president to manage its releases.

Crude oil prices spiked modestly after OPEC’s announced production cut. But the cartel is notoriously undisciplined. That, combined with releases from the strategic reserve, has kept prices from spiking further. Oil was trading in the $86-a-barrel range on Monday, $10 a barrel higher than at the end of September. 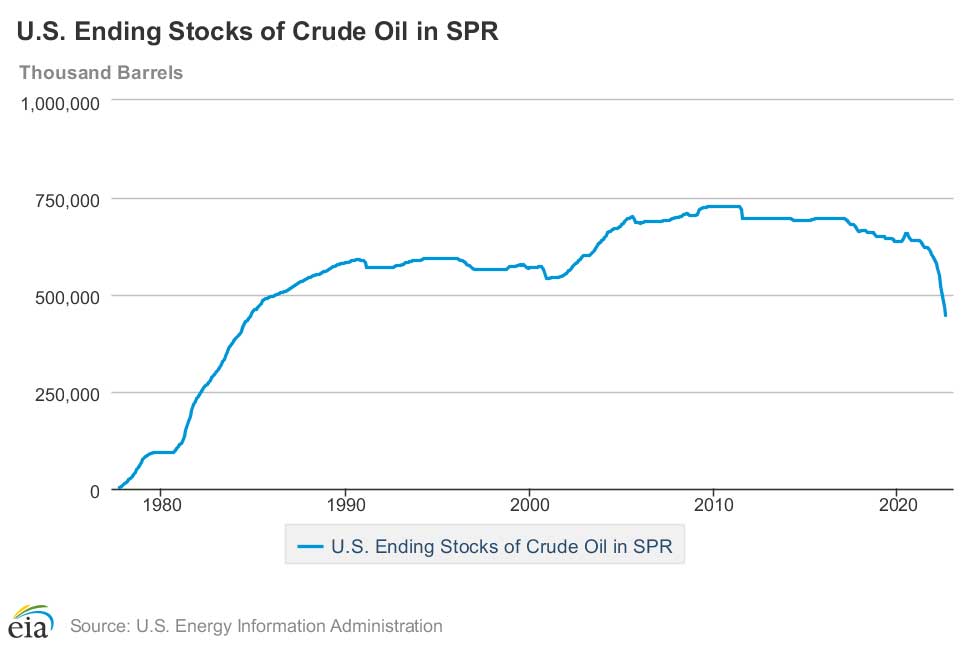