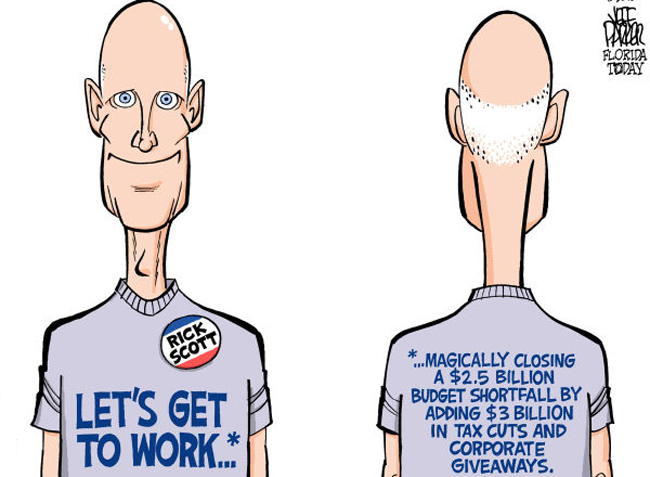 State employees had better develop an “entrepreneurial spirit” and a “start-up company philosophy.” And they’d better get ready to see jobs “privatized.”

That message echoes through a report that Gov.-elect Rick Scott’s transition team released this week about the state’s health and human-service agencies.

County health departments? They should be a “last resort” for providing primary care to residents.

Scott made a fortune running the Columbia/HCA hospital company and then founded a chain of walk-in clinics. Bottom line, he’s no stranger to the private health-care industry.

Now, judging from the 68-page transition team report, he could move state health services more in that direction. While the details of such ideas always get sticky, Scott appears to have a willing audience among business-friendly Republican legislative leaders who are worried about a gaping budget shortfall.

But lobbyist Karen Woodall, who has long worked on health and human-services issues, worries that a privatization push could focus more on saving money than on better delivery of services. The state already relies heavily on non-profit groups to provide services, she said, and she is particularly concerned about attempts to shift work to for-profit companies.

“My overarching concern is that saving money shouldn’t be the driving factor,” Woodall said.

One potentially far-reaching recommendation in the report is to “get the Department of Health and the county health departments out of the business of primary-care delivery.”

The transition team said an increase in providing primary care at county health departments contributes to “mission creep” — a view that public-health agencies have expanded their duties beyond what was originally intended.

The recommendation also appears to have support among legislative leaders, who have increasingly talked about relying on non-profit federally qualified health centers — instead of county health departments — to meet patient needs. Other options mentioned in the report include increased use of teaching hospitals and private providers to care for patients.

“I do not believe DOH should be providing primary care services in a county where an FQHC or free primary clinics exists,” House Appropriations Chairwoman Denise Grimsley, R-Sebring, said in an e-mail this week.

But Dr. Leslie Beitsch, associate dean for health affairs at the Florida State University Medical School, said moving away from primary care at health departments needs to be looked at county by county. He said, for example, that might work in places such as Miami-Dade County, but not in rural counties that don’t have alternative providers.

“In DeSoto County, you’re going to need the health department,” said Beitsch, who has teamed with other public-health advocates to make a series of recommendations about the future of the Department of Health.

To a large extent, however, the transition team’s recommendations are aimed at squeezing government and making it more business-like. Even the wording is akin to something out a business seminar.

One part calls for the Department of Health leadership “to reflect an entrepreneurial spirit and passion for excellence.” It also says the department should “institutionalize a start-up company philosophy” and “create measurable outcomes and reward those who are entrepreneurial in achieving those outcomes.”

Beyond the philosophy and lingo, some ideas aren’t new. For example, the team calls for closing the state’s A.G. Holley tuberculosis hospital in Palm Beach County and moving patients to other facilities — an idea that has rattled around the Legislature for years.

The report says “significant savings can be realized by reduction in facility-related overhead and sale of the hospital and its large campus.”

The president of the Florida Hospital Association, however, said recently it would be a mistake to close A.G. Holley and scatter TB patients to other hospitals throughout the state. Bruce Rueben told Health News Florida that caring for the patients is the “quintessential public-health responsibility.”

Another warmed-up idea would privatize mental hospitals in Macclenny, Gainesville and Chattahoochee. The report says the move could save $38 million to $58 million for the state — and lead to better care.

“Examples of the successful privatization of former state hospitals have proven to provide better care to patients,” the report said.

But if Scott moves forward with the idea, he likely will slam into some political realities. The Macclenny hospital, for instance, is a major employer in rural Baker County, and community leaders have lobbied heavily against past privatization efforts.

Some ideas in the report are more novel. One potentially explosive recommendation calls for a panel to study the role that taxpayer-funded public hospitals — like Jackson Memorial and the North and South Broward systems — should play in the future.

The report points to some urban areas, such as Tampa and Orlando, that provide health services to low-income people without needing “government-run hospitals.”

“What is unclear is whether government should be in the business of operating a competitive enterprise using tax dollars as a subsidy without a thorough review of whether this model is the most-beneficial and cost-effective way to use the tax revenue,” the report says.