Florida lost nearly 1.2 million jobs last spring as residents began staying home, then the state locked down for a month, in protective measures against the virus. Just over 600,000 jobs have returned. But tourism and the hospitality industry continue to suffer from the pandemic’s effects despite Gov. Ron DeSantis lifting all restrictions on all businesses last month: consumers are far less willing to be as risky, especially in light of continuing coronavirus infections–at a rate of about 2,500 a day across the state, and more than 10 a day in Flagler–and a steadily mounting death toll. More than 16,000 people have died of the disease in the state, 34 of them Flagler residents.

While the number of unemployed people decreased by 170 in Flagler in September, to 2,845, the unemployment rate shrank also because the labor force shrank again, by 340 workers, pointing to continued discouragement among workers to re-join the labor force, or their inability to do so. The county’s labor force had been setting records and moving toward the 50,000 mark just before covid struck. It is now at 45,902, down from 47,459 a year ago. There are 2,700 fewer unemployed persons in the county today than there were a year ago.

In Florida, the number of net jobs grew by 47,300, but with more people rejoining the workforce as active job-seekers, the unemployment rate rose. Retail trade added 8,600 jobs in September, transportation and warehousing added 3,300, health care and social assistance added 7,700, local government added 12,400 jobs, and leisure and hospitality added 4,100, but was still 234,000 short of where the sector was a year ago.

Consumer confidence in the state reflects the shape of the unemployment line: while confidence rose in September to its highest level since bottoming out in spring, to 85.1, it still has regained only half its pre-covid level, according to the University of Florida’s Bureau of Economic and Business Research.

Floridians’ perceptions about current economic conditions were mixed, the bureau reported. On one hand, perceptions of personal financial situations now compared with a year ago decreased two-tenths of a point from 68.3 to 68.1. On the other hand, opinions as to whether now is a good time to buy a major household item such as furniture or a car showed a sizable increase in this month’s readings from 71.8 to 80.2 a change of 8.4 points. Expectations of personal financial situations a year from now increased 5.2 points from 90.5 to 95.7. Outlooks of U.S. economic conditions over the next year showed the biggest increase in this month’s reading from 77.5 to 88.9, increasing 11.4 points. Similarly, expectations of U.S. economic conditions over the next five years increased 6.8 points from 85.9 to 92.7.

“The gain in September’s confidence came mostly from consumers’ future expectations about the national economy. Overall, Floridians are more optimistic and are anticipating greater economic prospects in the medium- and long-run,” Hector H. Sandoval, director of the Economic Analysis Program at the bureau said.

Florida posted a 7.6 percent unemployment rate in September, a slight uptick as the state’s hospitality and tourism industries continue to face long-term struggles during the coronavirus pandemic. The September mark was up 0.3 percentage points from August, according to the Florida Department of Economic Opportunity. The state initially reported the August rate at 7.4 percent but revised it Friday to 7.3 percent. The September rate reflected 770,000 jobless Floridians — 27,000 more than in August — out of a labor force of 10.14 million people. 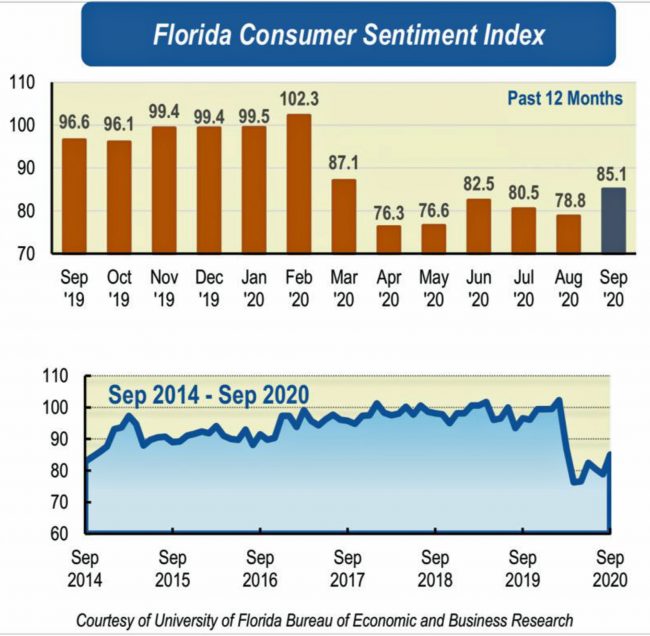