In Palm Coast City Manager Jim Landon’s words (happy-face emoticon not included), “Santa will have all his reindeer this year,” thanks to four city employees who saved a doe from drowning in a coldish pond at Grand Haven Wednesday morning.

According to an account of the incident by Palm Coast’s Cindi Lane, residents at Grand Haven spotted the doe swimming in the pond. “The doe was just able to balance herself on the culvert pipe to rest, but she kept sliding off and would have to swim again.” Lane wrote. The doe had no way out because a cement wall all the way around the pond prevented her from getting a footing somewhere to spring out.

Florida Fish and Wildlife Commission was sending an officer from Jacksonville, but the agency was concerned that the rescuer wouldn’t arrive in time because the doe was obviously fatigued.

Palm Coast Animal Control got the call around 8 a.m. Eva Boivin and Heather Priestap of animal control were joined by Mark Ballard and Mike Hadden, two city code inspectors. The team was able to get a thick leash around the base of the doe’s neck. She tried to swim away, but they were able to pull her back to the side of the pond. Ballard and Hadden were then able to lift her out.

The doe, whose name is being withheld pending next-of-kin notification, was very tired and shaking, so the Palm Coast employees covered her in towels and dried her off. “She was very wobbly and falling when she walked, but she finally got onto a resident’s front porch,” Lane wrote. “When FWC arrived, they picked her up and carried her into the woods. They checked on her a couple of times, and she was alert and doing alright.”

The rescue inspired Sara Lockhart, the senior planner who retired from Palm Coast government and a Grand Haven resident who witnessed the rescue and intervened to help, to write a poem. It appears in full below.

Twas eight days before Christmas, when what should appear, a deer drowning in the bulkhead lake with no way out, that was clear.

When I spotted the poor beast, I made such a clatter, my husband yelled, “What’s the matter?” Away from the window, I flew like a flash, and to the cell phones we made a mad dash.

First the Flagler Sheriff’s Office said no, then the CDD, perhaps Florida Fish and Wildlife, but at sixty minutes out, who else could there be? Animal Control, that’s who may help, so quickly, quickly, we gave them a yelp.

On to the far bulkhead my husband went, to strategize with congregating  neighbors about the unfolding event.

And suddenly, what to my wondering eyes should appear, but four City employees, carrying rescue gear!  What’s the situation?” they wanted to know, and so I showed them which way to go.

With skill and care, they crept down the back yard. The deer shifted again. A rescue may be hard.

But wait, what was that? A sling in place, a tug on the line, then out over the bulkhead in the nick of time!

In the blink of an eye, it happened that quick, but I knew at that moment they had this thing licked! 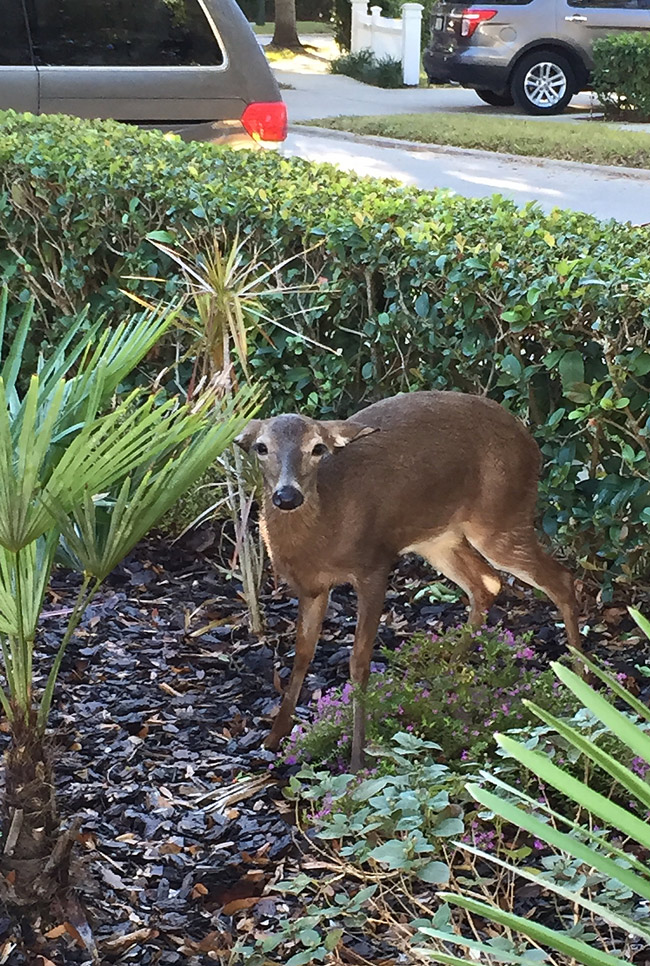