Note: Lewis Colam rows into Palm Coast sometime Tuesday afternoon, and is due to dock at the Palm Coast Marina, where Mayor Jon Netts will welcome him. Anyone is welcome, boaters included. We’ll provide a more exact time as he approaches.

There’s good reason for it. The 24-year-old native of Plymouth (the original one, not the colony) is a cross between two other famous Brits: he looks like Hugh Grant, the actor, which has nothing to do with Colam’s welcome. But he dares like Rory Stewart, the young Member of Parliament who, in 2002, walked across Afghanistan in winter and lived to write about it. Colam’s journey is nearly on the same order of magnitude, even if he won’t be braving mines or overly bearded bandits. He set out from Miami in a 15-foot rowboat, by himself, on March 3. No engine. No sail. Not even a data plan on his portable device. Just two oars for power. He intends to row almost every day, at 2 to 4 mph, through the Intracoastal Waterway and segments of the Atlantic, the 1,400 miles to New York Harbor. The Statue of Liberty, and that Lazarus line about the tired, will be his finishing line.

He’s doing it to raise $20,000 for Alzheimer’s research. It has to do with a friend’s grandmother, stricken by the disease, and with his own urge, recurring since his teens, to break out from whatever cubicle he happens to be in—a management consultant’s job in London was the last—and find his way by losing it.

When he was 18, it was a trip by boat and bus to Chile, Bolivia, Venezuela and Colombia. Two years ago it was Turkey, Syria, Jordan, Israel and Egypt. He still wants to do a Heart of Darkness sort of trip, a-la-Charles Marlow, in the thick of the Congo, once Congo is a little less of a genocidal place. That Syrian stamp in his passport was problem enough. It distressed American authorities quite a bit when Colam announced his intentions to take on the Eastern Seaboard. They hassled him over his trip to Syria. Then they cleared him.

Besides, it’s for Alzheimer’s. “I saw how devastating it is, how much it really kind of ruins lives and affects families,” Colam says. “I looked into it a bit more and realized they could do with a little bit of help. That’s why I thought why didn’t I do a long distance event and try to raise as much money as I can.” Not three weeks into his trip, he’s already at 85 percent of his goal. I’ve been staggered and astounded and perfectly grateful for the support of the American people, people in south and central Florida have just donated so much money so far and really got behind what I’m doing, so in two weeks I’ve got $16,500.”

He might raise his fund-raising goal, what with months of rowing and the nation’s biggest media markets ahead of him. The Huffington Post, the Sun Sentinel, the Palm Beach Post and the York Press back in England (where he went to university to study politics) have all, among others, written about him. Brassier ink is ahead, if he can sustain what he began.

A Genesis of Daring

The Florida starting point isn’t just for geographically aesthetic reasons (there aren’t other ways to log 1,400 miles by rowboat with New York Harbor and the Statue of Liberty for a finishing line). A great uncle long ago migrated from Ireland to Fort Lauderdale to start a fishing business. He didn’t get far. His boat capsized the first day out. But falling in love with a Floridian kept him moored to these shores. Colam’s rougher seas are still ahead. He’s almost reckless in the way he talks about his method.

“I guess a lot of people think that to do a trip like this you have to spend two years training your body, preparing your routes and saving thousands of dollars of cash hoarded up, or you need rich parents to bankroll you,” Colam says. “Part of what I set out to show, I hope, is that a 24-year-old with no training and with no idea of where he’s going can do this, and you can get sponsorships to cover it. So at the moment I have no real plans for the future. It’s more just about me trying to raise money for charity. Two things: I’ve got a mission, and I’ve got an adventure here.”

He had his doubts early on. The solitude—despite urban surroundings—the hellish food, the weather, the sheer grind took their toll, especially between the fourth and 10th day. He trained himself to think in increments of success, and to regularly read some of the voluminous encouraging email he receives. It’s mental fuel.

“I try to take one day at a time,” he says. “You just try to get to the end of that day. As soon as you concentrate on the amount of distance ahead it’s easy to get overwhelmed and depressed by how far it is, feeling that you’ve got to do this every day. I’m pretty much not going to have any rest days for the next 50 days, so trying to take one day at a time and trying to just visualize something very positive and to me the positive thing is reaching the end, seeing the Statue of Liberty, and meeting the folks from the charity. The charity’s called the Fischer Center and they’re based in Manhattan. When I get to see them I’ll be really proud of myself. That’s how I keep going. I guess every day I feel like quitting. Other than the first two or three days, there hasn’t really been a day when I haven’t considered giving up. But I haven’t felt overwhelmed by the distance from the task. I didn’t realize how far it was. I’m not quite sure why. The distance is—I’m from Britain, and the distance is like twice the length of Britain, and I would never in a million years would you ever try to row the length of Britain, let alone twice the length. So I guess it’s easy to be overwhelmed by the distance, but every time I feel like giving up, you just stop, you have a handful of peanuts, or cashews if you’re lucky, and I just try to do 10 more minutes on the oars, then 10 minutes turn into 20, and then I see I’ve made another mile.”

Monday morning, he spoke about his trip by phone as he bobbed in the Intracoastal’s waters just north of New Smyrna Beach. He was looking forward to Palm Coast for several reasons. He’ll be spending a day or two here, resting, writing, recuperating. He’ll be staying at the home of Isobel Karvwatt, an 86-year-old fellow-Brit, a widow and mother of two. The last two details are especially relevant: Colam worked with one of her sons in London, when Colam decided to quit his day job and take to the water. Also, Karvwatt’s widowhood was the source of an idea her two sons turned into a new company that launches this week, called Iamfine (as in “I am fine”). It’s for people who live alone, and who can’t necessarily afford the medical pendant system that alerts a firm when they’ve fallen or gotten hurt. Iamfine is a check-in system: they call in once a day, to say they’re fine. The day they don’t, someone checks on them.

“The Iamfine company was conceived or born in conversation around my kitchen table in Palm Coast. That’s how these things happen,” Karvwatt says. And Iamfine is the chief sponsor of Colam’s journey. The painted Iamfine signs you can see on his boat are another Palm Coast connection: they’re the work of Fernando Carneiro’s Palm Coast Signs.

When Colam first landed in the state he drove up to Gainesville in his Jeep to meet up with his boat-maker. Colam is rowing in a $6,000 boat custom-made in Gainesville by Bill Larson of Little River Marine. Larson was so impressed with Colam that he came down last weekend to give Colam a few boating tips—and give him a few nights in Larson’s RV, to get a break from sleeping in the boat.

Solitude and a Solar Panel

“It’s tough because I’m doing 10 hours of exercise a day, getting very, very tired and needing a lot of rest, and it’s tough to get that rest when you’re asleep on the boat,” Colam says. “That’s a big part of the trip for me, and that’s what a lot of people I think admire about it, is the fact that I’m doing this solo and unsupported. There’s no one else rowing with me, there’s no other means of propulsion, there’s no sail, no motor. There isn’t my parents in a car following me up the coast. There’s no one here. I’m trying to run the whole thing on an iphone and a solar panel.”

What he misses most is warm food. “I eat a lot of dry pasta. It’s not the most nutritious and healthy and tasty. It’s quite horrible really,” he says. He eats a kilo of peanuts a day (about two pounds), Ritz crackers with peanut butter, dried oatmeal. “My diet is a combination between a bachelor’s and a child’s, lots of dry tinned food and lots of sugar.”

Charles Marlow After All

His biggest anxiety and concern is finding a good docking place for the evening. “The boat is very hard to stop because the docks here are huge and covered in barnacles so it’s very hard to dock the boat anywhere. So nine times out of 10 I only have a stop from a spoil island, which means that while I’m surrounded by people, I don’t get a huge amount of chance to speak to them. I guess my only regret so far is that I haven’t been able to see as many people as I’d like. But then, the people I do, they make up for that.”

People like Isobel Karvwatt, her neighbor George Waite, the optometrist and boater who’s organizing Tuesday’s welcome party in Palm Coast for Colam, and people, further up the coast, who’ve already offered up roofs for coming nights, and potential additional sponsorships (he has about eight so far), and other collateral benefits, from word-of-mouth awareness to media coverage to a warm dinner.

“I feel like I’m not doing this for one person or even for my own personal achievement or adventure anymore. I do feel like it’s become a real community project. I mean, you wouldn’t believe how open people are being about their stories, and sharing with me their cases,” he says. “I never knew how many people are affected.”

But you can’t help feel concern, if not anxiety, looking at his remaining mileage, and listening to the way he is taking it on. “It sounds awful but I don’t listen to local knowledge or what people tell me,” he says. “Yesterday I got told you can’t cross that lake now, the weather is too strong, but if you head out into it, you battle away, you just keep rowing and finally you get through the lake and you’re fine. So I kind of don’t worry about—I just can’t be worried about it and just go regardless, and trust I’ll make it.”

Forget the Congo. Forget Hugh Grant and Rory Stewart, too. He’s Charles Marlow on the Intracoastal. 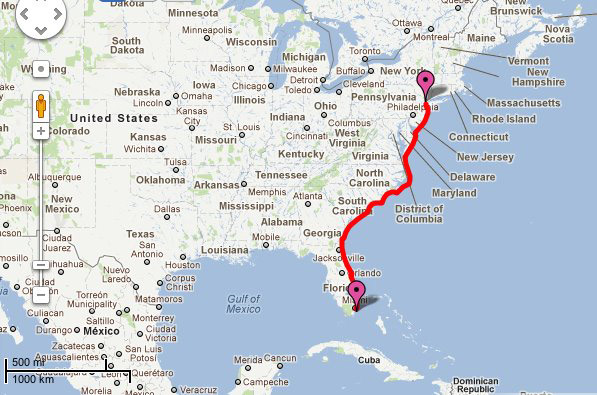