On Saturday, Heather Beaven’s mother-in-law tipped her over the $100,000 mark in contributions for Beaven’s congressional run against John Mica in the 7th congressional district. “Big milestone,” Beaven called it on her Facebook page. But still a fraction from the money mastodon of the Mica machine.

Beaven will need to do a lot better than six figures if she hopes to make the contest more of a PR campaign for her other endeavors (as no-chance candidates often do: running for office is sheer marketing, even, and especially, in a lost cause). Beaven, 41, is a Palm Coast resident and head of a non-profit, state-funded agency that helps at-risk students. Mica, 67, is a nine-term incumbent who was first elected in 1992, the year Bill Clinton was elected and two years before the Congressional election that returned Republicans to the majority for the first time in 40 years.

For all his rather hard-right, party-line Republicanism, an unremarkable (if unfailingly amiable) personality and an even less remarkable political imagination, Mica has been winning his elections with 60 percent of the vote or more in the past five elections (he was unopposed in 2004 and 1998).

Victories like that aren’t secured without winning large chunks of independents and some of the opponent’s party faithfuls. Mica does that by being a junior Robert C. Byrd. He doesn’t bring bacon home. He builds the roads that truck it in. And now he’s on a tear to build rail, too, finding in rail an excellent opportunity to make greens love him.

Beaven in comparison is an unknown outside of education’s administrative circles, and even then, her name circulates mostly in connection with grant applications for her educational foundation, of which her husband is also an executive.

This page will keep track of the Beaven-Mica race through November, updating various campaign finance figures as they become available. Check back in the next day or so for additional charts. figures are based on the last report, filed March 31. The data is drawn from OpenSecrets.org. The clunkers in the headline, incidentally, does not refer strictly to Mica and Beaven (he’s more of a surprisingly efficient Yugo–one of the few still on the road–she’s more Toyota with surprises) but to anyone willing to associate with an institution that garners lower approvals than just about any other institution in the country. Clunkers is putting it mildly.

Mica-Beaven: Where their Money Comes From

Here are each candidates’ top contributors. Beaven’s contributors include an odd $1,000 donation from the “State of Florida.” The state isn’t in the habit of supporting political candidates.

Winning With Lots of Money (or Less)

Mica’s run of victories include a 60 percent win in 2002 despite the best-financed campaign by an opponent in Mica’s nine races to date. Wayne Hogan, a millionaire lawyer from S. Augustine, put up $4.5 million of his own money to Mica’s $1.4 million. That year, redistricting added more Democrats in District 7. It made no difference in Mica’s race.

The graph below shows the money race between Mica and his opponents in the past five electoral cycles. 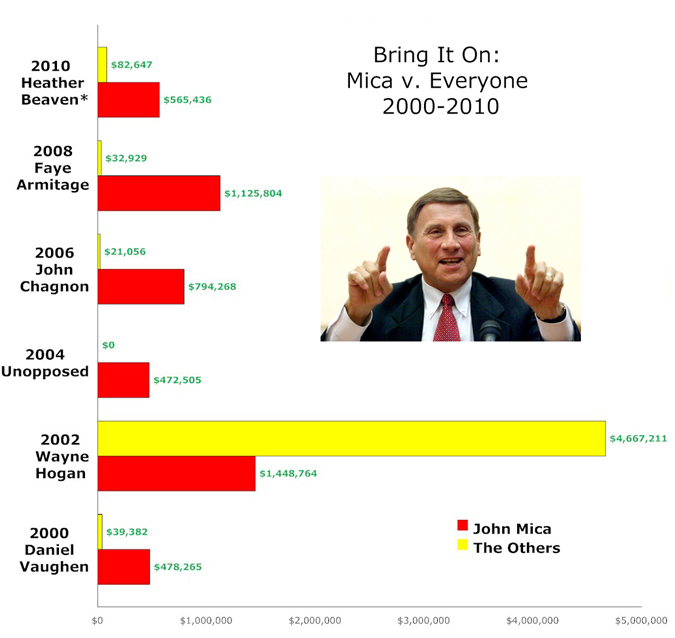