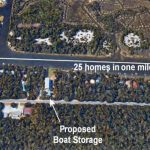 The proposed Hammock Harbor boat storage and restaurant development near Hammock Hardware on A1A drew a legal appeal from residents who disputed the county’s interpretation allowing the re-development under existing zoning rules. But county commissioners saw nothing wrong with the project.

A proposed redevelopment of the old Newcastle Marine boat manufacturing site in the Hammock, with a boat-storage facility for 240 boats and a half dozen businesses, is turning into that region’s latest battle between a developer and residents represented by the Hammock Community Association.

Captain’s BBQ says it won;t pay for a sewer extension even though the extension is needed only because Captain’s wants to expand, and the Hammock Community Association is no longer supportive of a new building site.

Allaying fears that his mind is made up, County Commissioner Greg Hansen said he’s willing to go for a compromise that would locate Captain’s BBQ away from the center of Bing’s Landing.