With all ballots counted, local races are over: Trevor Tucker has held on to the school board seat to which he was appointed in January to replace the late Peter Palmer. Tucker beat Marc Ray handily, 56 to 43 percent. But there’ll be a run-off for the District 5 seat between John Fischer and Raven Sword. Fischer got 44 percent of the vote to Sword’s 34 percent, with Peter Peligian pulling in 22 percent.

Four years ago, John Fischer forced a run-off when he ran against Evie Shellenberger, who’s retiring from the seat this year. Fischer was in a three-way race back then, too. He barely edged out Frank Meeker by less than 1 percentage point, polling 27 percent, against Shellenberger’s 47 percent. (Meeker eventually won a seat on the Palm Coast City Council.) In the runoff, Shellenberger beat Fischer by just four points, 52-48 percent.

The run-off was held then, as it will be this time, in the general election, scheduled for Nov. 2.

In the judges’ races, Marc Dwyer had a good showing in Flagler County, polling first in a field of six, with 27 percent of the vote. Sid Nowell was second, with 23 percent, and Dennis Craig was third with 22 percent.

Neither Dwyer nor Nowell will survive, however, once ballots for the 7th Judicial District race are counted from Volusia, St. Johns and Putnam. In Volusia alone, Joe Horrox polled double Dwyer’s numbers there, and four times Nowell’s, with more votes yet to be counted.

Turnout was dismal. At 22 percent, it was worse than the last two off-year election primaries, four and eight years ago.

More detailed numbers in the chart below the graph and the picture. 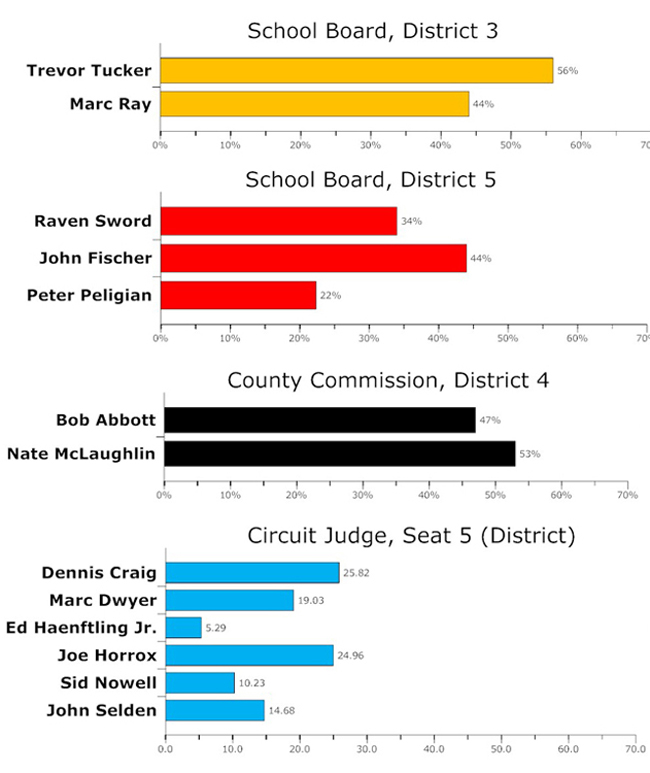