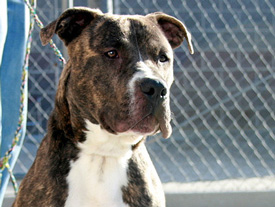 Jennifer Bair is a 25-year-old resident of Belvedere Lane in Palm Coast. She owns a beagle called Daisy, which she takes on walks in her neighborhood or in her backyard, on a leash, as was the case Sunday. Bair started carrying a gun after a neighborhood pit bull charged her and her dog on a previous occasion.

On Sunday, as she was walking Daisy in her backyard, the pit bull, known as KimK, charged her again, according to a Flagler County Sheriff’s report, “barking and snarling.”

Bair took out her Bersa 380 handgun and fired.

Bair’s fiancé, Jonathan Tanenbaum, reported the incident to the Sheriff’s Office that evening, as Bair had to leave for work, the report states.
Tanenbaum, 25, was at the scene when the incident occurred but was not involved.

He said Baire retreated to her house after firing the round, while the brown pit bull “immediately ran to its home at 49 Berkshire Lane.”

The pit bull belongs to Marcus Chamblin, a 20-year-old resident at the Berkshire Lane house. KimK was not injured, the report states. The dog was chained to a tree when the investigative deputy spoke with Chamblin, who said that his dogs “do get loose from their chained areas and he was aware that KimK had gotten loose,” the report states. A Palm Coast ordinance requires dogs to be leashed or chained in the city.

The deputy contacted animal control, which was aware of the ongoing issue of Chamblin’s aggressive dogs at 49 Berkshire Lane. Animal control said it would follow-up on Monday.