In one small unit of a dull-brown row of buildings at the Palm Coast Commercial and Industrial Park–commonly known as Hargrove Grade–Jimmy Day holds forth as a general in a modern-day whiskey rebellion.

Since 2010, Day’s company, Flagler Spirits, has been part of a boom in micro-distilleries. These numbered 69 in the United States and Canada in 2003, and now number 528. The number is predicted to nearly double by 2015. It’s a return-to-the-roots of sorts: micro-distilleries were the norm in the 18th century, though for lack of regulations and hygiene drinkers sometimes took their life in their livers when they imbibed.

Today there’s no set standard defining micro-distilleries, which tend to attach themselves to wineries or restaurants, or to farms, when they’re not either elaborate operations or tiny enterprises like Day’s. They experiment. They use local products. They develop regional specialties.

Day decided to become a craft distiller after having an unsatisfying drink at home with friend, and now employee, Stan Popowski. “We were drinking and we said, ‘We can do better than this,’ ” Day said. He was drinking Georgia Moon and dumped the rest of the bottle. “It’s not often I throw out liquor,” he said, but he kept the bottle because that was the inspiration. From that “aha” moment it took six months to get his federal license and 14 months to make his first batch.

Tall with a friendly smile and quick wit, Day owned two funeral homes in Montana before selling those businesses and moving back to his home state of Florida, settling in Flagler County.

“I’m semi-retired and you have to do something,” Day said. “This is a fun line of work.”

Fun for Day includes making Flagler Lightning, a clear, 80-proof whiskey moonshine, as well as vodka and rum under the name Flagler Spirits, with a bourbon to come soon.

The spirits distill from a row of three stainless steel barrels topped with copper pipes connected by plastic tubes to blue barrels, where the good stuff collects in drips. It takes about four hours to fill the 55-gallon drum. A cot in the back lets the person on the night shift take a nap in between the nearly hourly checks of the mixture.

“That’s about as exciting as distilling is, clear liquid going through clear tubes,” Day said as he points to the barrel formation. “Batches are consistent, but this is a particularly good one,” he said, popping a lid on one of the blue barrels, allowing a sweet, smooth aroma of fine rum to rise into the air briefly.”

Heat comes into play, fueling the process of the liquid turning to gas, then cooling into precious spirits.

The liquids act like an “unruly mob,” Day said, until the transformation to a gas is cooled to a calm new liquid. “At first you get this horrible tasting liquid,” Day said. “The trick is to reach in and get the liquid you want.”

Flagler Lightning and Flagler Spirits are marketed to wholesalers who add water and bottle the liquor under various brand names. He does not sell retail because of state law. In Florida, distillers sell to wholesalers, with the federal government taking out its tax bite on the transaction. Wholesalers sell to bars, restaurants and retail stores, with the state government taking its tax cut. If someone found his distillery, which has no sign on the door, and offered him $100 for a bottle, he’d say “no” because he could face up to three years in prison if he sold retail directly.

Day likes the rules that limit his business to wholesale sales.

“How would you like to get 40 cents every time Bacardi sells a bottle?” Day said. “Well, I have the ability to do that.”

“He’s a unique character in that he’s in the craft business, but he’s a niche,” Owens said. “That niche is doing very well.”

Small craft distillers amount to about 1 percent of the $40 billion liquor industry, but the artisan distilleries are growing at 30 percent a year for the foreseeable future, Owens said.

A lot of people think it would be fun to go into the distilling business, Owens said. His American Distilling Institute web site, www.distilling.com, posts the rules and regulations for people to download. But state and federal regulations aren’t the big barrier to entry into the business.

“The government’s not the problem,” Owens said. The problem is learning how to make liquor. “You’ve got to figure it out,” Owens said.

Knowledge of how to make liquor is where Day has the advantage after he downloaded government regulations from the distilling web site.

Day declines to answer directly when asked if he was an illegal moonshiner before he became legal. There’s four more years before the statute of limitations expire. But he’s full of stories about illegal moonshine, including payoffs to sheriff’s deputies in Flagler County.

“It’s the entrepreneurial history that made this country great,” Day said. “My family had a 160-year history of making liquor illegally.” Farmers distilled to extend the life of crops and make needed money. “Moonshiners never got rich,” Day said. “Bootleggers got rich. Nobody in my family would ever have made liquor if it wasn’t for hungry mouths and bare feet.”

Day credits President George W. Bush for making it possible for craft distillers to get a license. Bush, a militantly reformed drunk, noticed the success of craft breweries and wineries and thought small distillers would also create jobs. He was right.

Owens of the Distilling Institute said start-up distilleries average an investment of $500,000, with some putting up $2 million or more. A bare bones operation could be started for $100,000, “but those don’t make money,” he said.

Day might be the exception. His initial investment was under $100,000.

Day has honors to show he’s won the battle for quality. At the recent American Whiskey Awards sponsored by the American Distilleries Institute, five wholesalers who bottle Flagler Spirits won first in their category.

“We had a little bit more swagger around here,” Day smiled proudly.

Another honor came through as a reporter showed up for an interview. Florida Travel and Life Magazine named Flagler Spirits’s Pirate Pete Rum (which includes Belle Glade molasses)  as one of the five best micro-distilleries’ products in Florida. Day didn’t know about the recognition until the UPS driver told him.

“There’s a hamburger chain that makes billions of hamburgers,” he said. “They’re good hamburgers. They’re inexpensive. But the hamburger you make in your back yard is better.” He points to the row of barrels. “This is back yard liquor. We make a better mousetrap.”

That mousetrap has been good for business. He buys molasses for rum from a company in Belle Grade and most of the rest of his supplies, largely corn and potatoes, in North Central Florida. Depending on the season, some shipments might come from out of state.

Flagler County’s director of the Department of Economic Opportunity, Helga van Eckert, was on vacation, but sent a comment through the county’s public information officer. “Flagler Spirits is a great company with a very bright future,” Eckert’s statement read. “One of the primary strategies of our department is to assist our local businesses to grow. When our local businesses grow, we all prosper.”

Jayne Fifer president and chief executive officer of the Volusia Manufacturers Association said, “Any kind of company the moves in and provides jobs is good for the community.”

Flagler Lightning clear moonshine whiskey and Flagler Spirits vodka and rum are always on the shelf at Sharps Liquor Store, 103 Flagler Plaza Drive, Palm Coast, near Florida 100 and Old Kings Road. The moonshine sells at over $20 and the vodka and rum under $20. Day advises, “Ask for the local stuff. If they don’t have it, ask why not.” He will sometimes show off his brand at local events, such as Taste of Flagler, but he buys from a wholesaler and gives away the liquor because he cannot sell liquor retail.

Distilleries are divided into a large number of very small operations and a few very large businesses, he said. “I’m the tallest midget,” Day said. “Next year I might be the shortest giant. We keep getting busier and busier.”

In addition to state regulations and 1,400 pages of federal rules, the city of Palm coast didn’t have a zoning designation for a distillery. Eventually, distilleries were added as a use in industrial zoned areas.

Success put those obstacles in the past, said Popowski, one of six Flagler Spirits employees.

Day is planning maneuvers to increase production by more than 10 times the current rate, add a bottling operation and employ 20 to 30 people.

“We’re working on a deal that could be a game changer,” Day said. “We’re on the edge of going kaboom.” 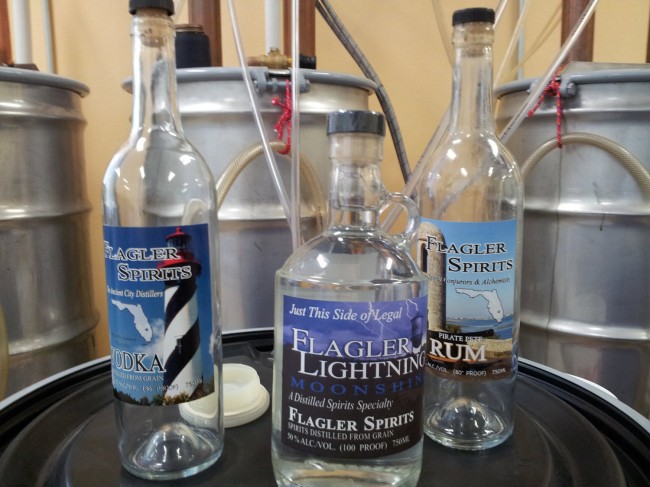