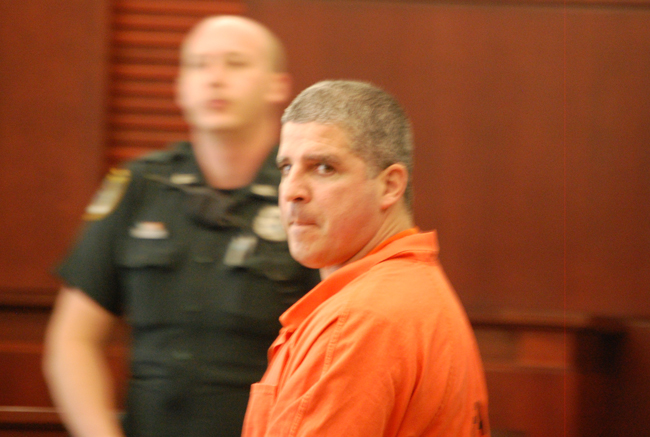 Joseph Milano is the alleged mafia assassin once known as Joey Calco who, rebranded by the federal witness protection program, owned a Goomba’s Pizzeria in Palm Coast’s Town Center until last May. Milano/Calco was to go on trial today for aggravated assault against his wife and children and illegal possession of a firearm. The prosecution had one problem: Its chief witness, Kristy Milano (Milano’s wife), who charged that her husband threatened her life and that of her children in mid-February, is nowhere to be found. (Read the live transcript of Milano’s court appearance today.) With Milano shackled and in his orange jail suit looking on, Assistant State Attorney Steve Gosney asked Circuit Judge Kim Hammond that be delayed until mid-June, giving the prosecution more time to find Kristy Milano, who, according to a Flagler County Sheriff’s Office detective, moved to California with her children. The detective said he “reached out to the authorities out there this morning to see if I could find what I needed.” He didn’t, though he added that he’d “overheard in conversation” that Kristy Milano was “in fear for her life and the lives of her children.”

Regina Nunnally, the public defender appointed to represent Milano in that case, ridiculed the State Attorney’s claim that it didn’t have enough time to find Milano’s apparently former wife. Nunnally wanted the trial to proceed. It was in Milano’s interest for the trial to start, since the charge against him would likely not stick without the only serious witness against him that the prosecution could muster wouldn’t be present.

Hammond was uncomfortable with the delay (and with the defense’s claim that Kristy Milano could easily be found) but granted it anyway, calling it the last. An exact date for trial wasn’t set, but June 14 was the date on most lips. “Be prepared to do it at that time or suffer the circumstances,” Hammond said.

That was just one case. Milano faces aggravated assault and illegal firearm possession charges in the case that unraveled his new identity in February 2009–the pistol-whipping (caught on videotape) of one customer and the beating up of another following a complaint about a calzone Milano/Calco had cooked in his pizzeria.In that case, it was the defense’s turn to argue for a delay. The public defender’s office isn’t representing Milano in that one. Attorney John Murray is. Murray replaced Robert Eddington after Eddington quit Milano’s side last May, citing “irreconcilable differences.” Last week Milano was in the odd position of arguing that he could not afford his defense without the state’s help, though he is keeping Murray as his private attorney in the so-called calzone case. Hammond agreed to declare Milano indigent and have the state pay for legal costs covering deposition transcripts and serving subpoenas. On Monday, Murray argued that the state hadn’t acted swiftly enough to pay for needed transcripts and subpoenas, and so needed the case delayed.It was Gosney’s turn to sound indignant, at times loudly and angrily so, calling Murray’s tactics and claims “garbage” and, in one case, an outright “lie.”

“Those things have been done and transcribed and in my pile for month,” Gosney said. “This is not excusable delay,” at which point Murray delivered the morning’s most astounding phrase, for a lawyer: “I’m sad to say, I do not have the deep pockets that the state has.” (Murray said that he has been paid only a “fraction” of what he’s owed from Milano.)