You don’t hear this every day. You haven’t heard it in recent memory. The Flagler County Chamber of Commerce, which, like its national parent. reflexively opposes most tax increases — or grudgingly accepts them when they have wide support — is lobbying local governments and civic groups to support a ballot initiative that would raise property taxes for the next 20 years.

The chamber and Enterprise Flagler, the economic-development entity financed by public and private money, say a new tax that would raise roughly $1.8 million in its first year, more in subsequent years, would be used to build new infrastructure, underwrite existing or future businesses with tax incentives, and finance some of the operations of Enterprise Flagler, among other things.

The Flagler County County Commission would have to approve the initiative by its June 7 meeting. It would appear on the November 2010 ballot as a referendum asking voters if they want their property taxes raised by 25 cents for every $1,000 in assessed value, which translates to $25 a year for a $150,000 property with a $50,000 homestead exemption. (Homes were selling at a median price of $121,000 in Flagler and Volusia County in March. At that price, the new tax would be $17.75 with a homestead exemption, $30 without.)

“We’re asking for a quarter mil for 20 years just like the ESL,” Michael Chiumento III said, referring to the tax levy that raises money to protect environmentally sensitive lands in Flagler, which voters overwhelmingly approved in 2008, when home prices were higher.

“Some people would say, why is the chamber of commerce here, in essence supporting a tax increase,” Patrick Kelly, president of the Flagler County Chamber of Commerce, told the Palm Coast City Council Monday. “The money is being spent already. It’s in budgets for both the county and the city. This just takes it out of the operating budget and gives it a permanent funding source.”

Kelly appeared before the council with chamber member Michael Chiumento III and Greg Rawls, head of Enterprise Flagler, the economic-development entity financed by public and private money, whose budget would be partly funded by the new tax.

Council members — no friends to tax increases, either — were non-committally supportive, though Mary DiStefano and Holsey Moorman stressed that the initiative would have to be convincingly sold to the public to win approval.

“A lot of people would look at that as a lot of money even though it may not be,” Moorman said. “Psychologically, they’re going to say, that’s another tax you’re hitting me with, you’re taxing me to death.”

“I have on my left and right people that are really against taxes,” Rawls replied, “and that’s been one of the biggest points of discussion that the group who has put this together to you had to have, because we clearly recognize that.”

The chamber’s and Enterprise Flagler’s priority is to get the measure on the ballot. But even that decision is not as immune from political considerations as the chamber may wish. In 2012, a half-cent sales tax expires in Palm Coast and Flagler County. The two governments are very likely to want to renew the sales tax, which funds immediate road and other visible infrastructure improvements that residents like (and see for themselves: the tax helps pave 50 miles of Palm Coast’s streets per year). If the business-infrastructure tax proposal goes on the ballot this fall, it may jeopardize the sales tax renewal in 2012. Moorman alluded to the sales tax when he suggested that people would then feel like government is “taxing me to death.”

Council member Frank Meeker was more critical. “The one thing that works a little bit against you in this whole concept,” Meeker said, “is a bit of a lack of specificity of what the funds will be used for. It’s almost like you’re asking the taxpayers to give you a blank check for one point x million dollars to do something with economic development but we’re not exactly sure what. And I think without a solid plan of what you’re proposing to accomplish in the first five years, I think it’s going to be difficult to sell the concept.” 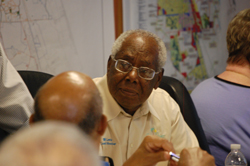 Ironically, the council’s most fervent anti-tax crusader–Mayor Jon Netts–flipped into the business-infrastructure tax’s most ardent supporter as he pointed to the city’s recent experience with Palm Coast Data, the big company that pledged to stay in town through incentives and generous city concessions. “The final selling point for keeping them here was we were able to make city hall available,” Netts said, referring to the city government yielding its former offices so Palm Coast Data could expand into them. There are no additional such buildings for new companies to move into, Netts said, so a tax would help build them.

Meeker wasn’t convinced of the if-you-build-it-they-will-come argument. “I’ve heard Greg talk before about ‘I’ve got prospects coming in but I don’t have the space to locate them in. I can’t bring them unless I’ve got the building. Well, back in the old ITT days we put multiple-spec buildings up in Hargrove Grade, and we had a difficult time selling them. Now there may be something is different about the economy now than it was back then. Maybe it was a cost issue. I don’t know what. But again, if you’re going to ask for the money, you need to have a specific plan on what you’re going to accomplish with it.”

“The County Commission really controls what happens with that money,” Kelly said.

When Flagler County Does Economic Development

But the County Commission has a dismal record when it comes to driving economic-development dollars: It built a $2 million luxurious hangar-and-office building for the Ginn development corporation in 2004 in exchange for Ginn’s pledge to lease the building for 20 years, only to see Ginn bail on the building–and leave county (and Palm Coast) taxpayers paying $20,000 a month for a massive, empty building in a depressed market with no takers. (Read a full account of the Ginn flop.)

And while the business-infrastructure tax aims primarily to help, eventually, diversify Flagler County’s economy, which depends overwhelmingly on residential property taxes, Palm Coast’s development plan is at cross-purposes with that diversification. The city is slating three colossal and overwhelmingly residential developments (or “developments of regional impact”) in its growth plans in addition to continuing to push for the development of tens of thousands of plots within the city that have yet to be developed.

Meanwhile, the bridge between economic development talk and hopes and actual accomplishments in Flagler County would have to be made clearer in taxpayers’ minds.

Aside from helping keep Palm Coast Data in town–an effort actually led by Palm Coast City Manager Jim Landon and sealed by Palm Coast’s concessions–Enterprise Flagler doesn’t have a record of consistent job creation that’s made a convincing difference in the county. Companies that add 25 to 50 workers are always welcome, but they don’t make a dent in the local unemployment rate. As Doug Baxter, president of the Flagler chamber, once noted, of the 3,000 or so local businesses, 95 percent employ one to five people.

Kelly, the chamber chairman, repeatedly said that the initiative, if it’s successful, would take the politics out of economic development. Recent evidence suggests otherwise.

Something of a small civil war has broken out over who should lead economic development in Volusia County. George Mirabal, the former president of the Daytona Regional Chamber of Commerce, wants to create an exclusive club of business representatives who’d wine, dine and lobby businesses into moving to Volusia County or expanding there. To be a member of the club (called Metro Daytona), a business would pay $100,000 or more. Mirabal wants the Volusia County Council to contribute $500,000 to the new entity, but the council would have a secondary role. The group, called Metro Daytona Inc., would be led by the private sector. It’s merely the latest in a series of attempts by business entities in Volusia to do economic development, under a new name and a new model. Before Metro Daytona, there was the Business Development Partnership, and before the partnership, there was the Daytona Regional Chamber of Commerce filled the role of private-sector economic development.

At every step, the private entities competed with county government on the economic-development turf. Volusia County has its own Economic Development Department, itself the latest incarnation of an attempt at business-development relevance. The department was previously known as Enterprise Volusia, which was once itself previously the Volusia County Business Development Corp. All that, incidentally, since 2000, and without mentioning other city and chambers of commerce’s economic development ventures.

None of this has kept Volusia’s unemployment rate from exceeding 13 percent. Now, Mirabal and Volusia County Council Chairman Frank Bruno are talking a good game of the need for unity on the economic development front, but the council is refusing to be part of Metro Daytona and Metro Daytona is painting the council as obstructionist. Without the council’s participation, Metro Daytona is virtually irrelevant. But so have the near-totality of business-development efforts in Volusia County for the past 10 years—as have the near totality of business development efforts in Flagler County. Residential and commercial construction and real estate have been the overwhelming driver of each county’s economy.

The business-infrastructure tax proposed by the Flagler chamber and Enterprise Flagler, in sum, is a simple, compelling proposal on its face, but one fraught with political implications.