Sitemap
In 2000, while thick in his first campaign for the presidency, then-Texas Gov. George W. Bush issued a proclamation declaring June 10 “Jesus Day.” The proclamation was little noticed in its immediate aftermath. But word spread through email and non-Christian denominations, so that by fall it was attracting some critical attention.

“Mr. Bush, who has put his Christian faith front and center in the campaign, has tried to project an image of inclusiveness to people of all ethnicities and religions. In the past, he has been put on the defensive for saying that the only way to heaven was through Christ, and for naming Jesus as his favorite political philosopher,” the Dallas Morning news reported on Aug. 6, 2000, just three days after Bush had won the GOP’s nomination for president in Philadelphia, with Dick Cheney as his running mate. Now the governor’s office has been receiving letters and e-mail messages from people outraged by the Jesus Day proclamation, or asking if it is true, said Linda Edwards, a spokeswoman for Mr. Bush in Texas.”

It was true, but the outrage did not quite derail Bush’s campaign. In retrospect, “Jesus Day” was one among many examples of what would turn into the making of the single-most overtly evangelical presidency in the nation’s history.

Following is the full text of Bush’s “Jesus Day” proclamation, followed by an image of the proclamation itself.

OFFICIAL MEMORANDUM
STATE OF TEXAS
OFFICE OF THE GOVERNOR

Throughout the world, people of all religions recognize Jesus Christ as an example of love, compassion, sacrifice and service. Reaching out to the poor, the suffering and the marginalized, he provided moral leadership that continues to inspire countless men, women, and children today.

To honor his life and teachings, Christians of all races and denominations have joined together to designate June 10 as Jesus Day. As part of this celebration of unity, they are taking part in the 10th annual March for Jesus in cities throughout the Lone Star State. The march, which began in Austin in 1991, is now held in nearly 180 countries. Jesus Day challenges people to follow Christ’s example by performing good works in their communities and neighborhoods. By nursing the sick, feeding the poor or volunteering in homeless shelters, everyone can play a role in making the world a better place.

I urge all Texans to answer the call to serve those in need. By volunteering their time, energy or resources to helping others, adults and youngsters follow Christ’s message of love and service in thought and deed.

in Texas and urge the appropriate recognition whereof.

In official recognition whereof, I hereby affix my signature this 17th day of March, 2000 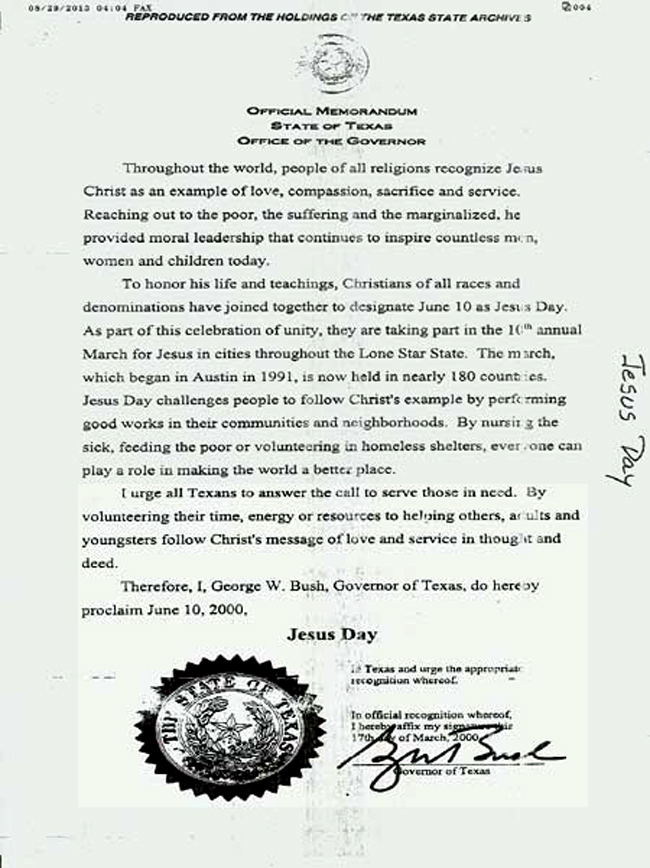