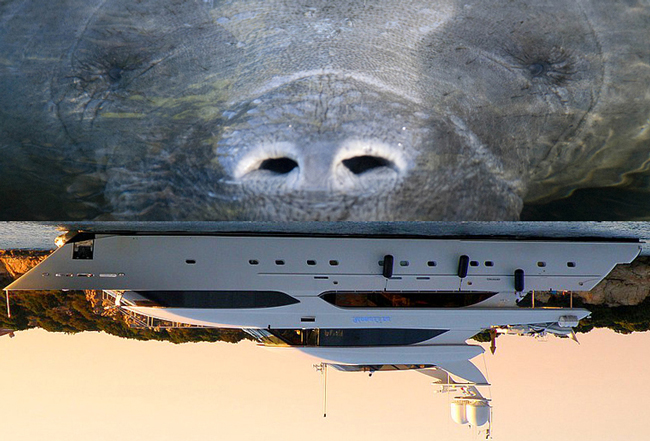 Even environmentalists think some provisions of the law absurd. “It’s too doctrinaire and too specific,” Jerry Full, a leading Palm Coast environmentalist and former city council member, described it.

Full is referring to a state law that controls how agencies and local governments must go about writing new rules for manatee protection. Flagler County is going through that exercise–and opening a window into how subjective interpretations of state law can ripple into public policy with one slant or another.

Step one: Fish and wildlife signals its intent to regulate something, somewhere–in this case, manatee protection in Flagler County’s Intracoastal Waterway, which, aside from a half-mile stretch to the south, has no speed zones. Step two: the county must form a rule-review committee. That committee must submit its findings to the state within 60 days. Flagler County Commissioners appointed the committee on Monday.

The requirement isn’t unreasonable in the context of Florida’s often polarized debates over environmental protection. Environmentalists are cast to one side, developers and resource “users” to the other. The law merely reflects the split, and the 50-50 requirement attempts to prevent local advisory boards from being stacked too heavily to one side.

There’s still a matter of subjectivity. One mayor at a Flagler County League of Cities meeting last month wondered how to tell one type of advocate from another. “We’ll beat it out of them,” Palm Coast Mayor Jon Netts joked. There was something comedic about the formation of the committee on Monday.

Take the case of Ed Caroe, an old hand at serving on government committees in Flagler who says he’s “discreetly described as a trouble-maker, but every county needs one.” Caroe was among the 18-odd applicants for the manatee rules review committee. The county wanted each Flagler city with an interest in the Intracoastal to have representation, with Palm Coast and Flagler Beach getting both a manatee advocate and a boating advocate.

Caroe’s application clearly had him in the boating camp. As he describes himself, he’s taught boating courses “to several thousand beginner boaters over 40+ years,” cruised his trawlers from Florida to New England “while a member of six different yacht clubs over many decades,” raced sailboats and written a book on electronic navigation. He also just as clearly tipped his hand in his application, writing against regulating the Intracoastal waterway: “Flagler residents and manatee can live together without drastic actions mandated,” he wrote.

The Fish and Wildlife Commission hasn’t released its proposed rule yet, so no one knows how “drastic” (or not) the proposal may be. Still, clarifying his position in an interview after his appointment to the committee, Caroe said he’d oppose speed zones on the Intracoastal. “It’s like cutting the speed limit to 25 on I-95,” he said, adding that only “once in a while” do boaters go 100 mph on the waterway. Would he oppose any speed limits, anywhere? “I sure wouldn’t be one of the ones encouraging it. Do I think it necessary? No.”

Caroe’s position as a boater advocate wouldn’t have been in question if it wasn’t for the email he sent Flagler County Environmental Planner Tim Telfer on Friday: “I really am a long time Manatee/Environmental Advocate as well as a many decades Waterway User. As you know from our conversation on this a while back, I am strongly on the side of giving manatees a fair break here in Flagler County — and didn’t know which category to list. So please change my application from ‘waterway user’ to Manatee/Environmental Advocate.'”

Who gave him the notion to switch? “That was my idea. I discussed it with Tim,” Caroe said, referring to Tim Telfer, a county environmental planner. “There were no applicants. That made it easy. There were not enough manatee protectors, or whatever the term is.” On Monday, Caroe was appointed to the rules review committee as a manatee advocate from Palm Coast.

Telfer did not return calls on Monday and Tuesday. Carl Laundrie, the county spokesman, responded to a request for additional emails that may have thrown some light on the sequence of events with a notice of a charge “not likely more than $30” to honor it–not the sort of fee we’re about to pay for such a routine matter, as Laundrie well knows.

Caroe insisted that he was an environmentalist first, “a tree hugger and an animal hugger from way back.” Jim Netherton, mayor of Marineland and a manatee advocate who was also appointed to the rules committee, noted that “just being a boat operator I don’t think would make one indifferent to manatee safety.” Netherton expects that slower speeds along the waterway “will probably be only one tool in the toolbox,” especially if the evidence compels some action. Manatee mortality rates, he said, will be key to deciding what to recommend. “I’ll be a little surprised if everyone says damn the manatees, let’s look out for the boaters’ interests,” he said. “I suspect the boaters will be willing to accept some restrictions that’ll certainly help the manatees.”

Caroe’s past suggests that unpredictability shadows him. A conservative by temperament, he was thrown out of the Republican Executive Committee for not toeing the party line, supporting some Democrats (some of whom are on the County Commission) and opposing some Republicans (two of whom, Hutch King and Blair Kanbar, are no longer on the commission). “I piss off the Republicans, I piss off the Democrats,” Caroe said, “but they’re both my friends.” By the time he’s done, he might say the same about manatee advocates and waterway users.