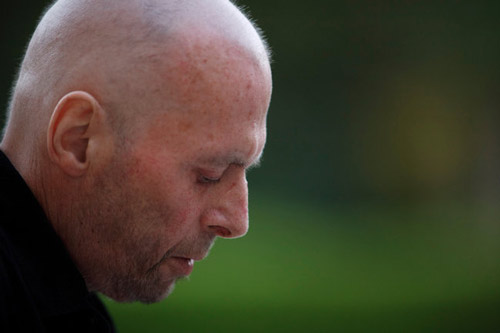 From Vanity Fair: “Christopher Hitchens—the incomparable critic, masterful rhetorician, fiery wit, and fearless bon vivant—died today at the age of 62. Hitchens was diagnosed with esophageal cancer in the spring of 2010, just after the publication of his memoir, Hitch-22, and began chemotherapy soon after. His matchless prose has appeared in Vanity Fair since 1992, when he was named contributing editor. “Cancer victimhood contains a permanent temptation to be self-centered and even solipsistic,” Hitchens wrote nearly a year ago in Vanity Fair, but his own final labors were anything but: in the last 12 months, he produced for this magazine a piece on U.S.-Pakistani relations in the wake of Osama bin Laden’s death, a portrait of Joan Didion, an essay on the Private Eye retrospective at the Victoria and Albert Museum, a prediction about the future of democracy in Egypt, a meditation on the legacy of progressivism in Wisconsin, and a series of frank, graceful, and exquisitely written essays in which he chronicled the physical and spiritual effects of his disease. At the end, Hitchens was more engaged, relentless, hilarious, observant, and intelligent than just about everyone else—just as he had been for the last four decades. “My chief consolation in this year of living dyingly has been the presence of friends,” he wrote in the June 2011 issue. He died in their presence, too, at the MD Anderson Cancer Center in Houston, Texas. May his 62 years of living, well, so livingly console the many of us who will miss him dearly.”

From The Times: “He took pains to emphasize that he had not revised his position on atheism, articulated in his best-selling 2007 book, “God Is Not Great: How Religion Poisons Everything,” although he did express amused appreciation at the hope, among some concerned Christians, that he might undergo a late-life conversion. He also professed to have no regrets for a lifetime of heavy smoking and drinking. “Writing is what’s important to me, and anything that helps me do that — or enhances and prolongs and deepens and sometimes intensifies argument and conversation — is worth it to me,” he told Charlie Rose in a television interview in 2010, adding that it was “impossible for me to imagine having my life without going to those parties, without having those late nights, without that second bottle.” Armed with a quick wit and a keen appetite for combat, Mr. Hitchens was in constant demand as a speaker on television, radio and the debating platform, where he held forth in a sonorous, plummily accented voice that seemed at odds with his disheveled appearance. He was a master of the extended peroration, peppered with literary allusions, and of the bright, off-the-cuff remark. In 2007, when the interviewer Sean Hannity tried to make the case for an all-seeing God, Mr. Hitchens dismissed the idea with contempt. “It would be like living in North Korea,” he said.” The full obituary.

Here he is in a more intelligent conversation: 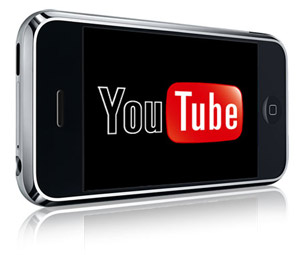 It was bound to happen. From the Times: “Time between the creation of Coca-Cola and hatred of New Coke: a century. Time between the creation of YouTube and hatred of the new YouTube: six years. The world’s largest video-sharing Web site introduced a new design this month, unleashing a wave of anger in blogs and online forums. It’s visible on YouTube itself, where a video explaining the changes has received more than three times as many dislikes as likes, and many of the attached comments couldn’t be published in a newspaper. That negative reaction certainly has a lot to do with a general hatred of change (which is surprisingly strong on the Web, the only place that most of us visit seven days a week). […] But beyond aesthetics lies a deeper change, one that the naysayers have perceived, explicitly or intuitively: the redesign is a muted but firm declaration that the party is over. It’s YouTube’s strongest step away from what will be seen as its short-lived early heyday as a largely unregulated repository of funny cats, anonymous guitar masters, angry Asian bus riders and countless other weird and wonderful things. […] It’s not too early, though, to start feeling nostalgic for the loosey-goosey idiosyncratic charm of the YouTube that was. Wasting time in the office won’t be quite the same.” The full story.

From back when David Letterman had a morning show, and Kaufman had just quit Taxi, four years before his death from a rare form of lung cancer.

From the Science Update Blog: “Can cancer be prevented? Decades of research have shown that a person’s chances of getting cancer depends on a mishmash of their genes and their environment, but also certain aspects of their lives, many of which they can control. [… The] latest calculations, based on predicted cases for 2010, show that smoking, diet, alcohol and obesity are behind more than 100,000 cancers. This is equivalent to one third of all cancers diagnosed in the UK each year. And this figure further increases to around 134,000 when taking into account all 14 lifestyle and environmental risk factors analysed in this study. There’s more in-depth information about the statistics [here][…] But to help make sense of the vast quantity of information contained in the 91-page report, we’ve also put together a graphic that shows the proportion of cancers that can be prevented through lifestyle changes. It’s worth spending a minute or so looking at the key to understand how to interpret the graphic (which you can download as a larger PDF version). 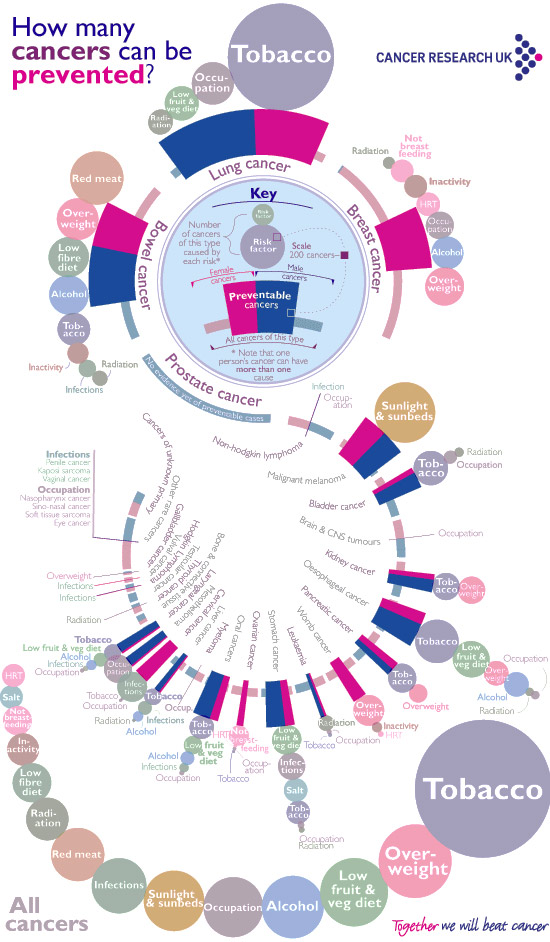 Always priceless: when the stuffed shirts are unstuffed by Ali G: 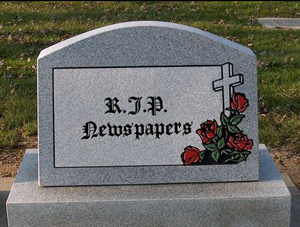 The USC Annenberg Center for the Digital Future has a new report predicting the end of most newspapers within five years. From Annenberg: ““After 10 years of studies, we find that the strengths as well as the consequences of technology are more profound than ever,” said Jeffrey I. Cole, director of the Center for the Digital Future. “At one extreme, we see users with the ability to have constant social connection, unlimited access to information, and unprecedented buying power. At the other extreme, we find extraordinary demands on our time, major concerns about privacy and vital questions about the proliferation of technology – including a range of issues that didn’t exist 10 years ago. […] Most print newspapers will be gone in five years: “Circulation of print newspapers continues to plummet, and we believe that the only print newspapers that will survive will be at the extremes of the medium – the largest and the smallest,” said Cole. It’s likely that only four major daily newspapers will continue in print form: The New York Times, USA Today, the Washington Post, and the Wall Street Journal. At the other extreme, local weekly newspapers may still survive. “The impending death of the American print newspaper continues to raise many questions,” Cole said. “Will media organizations survive and thrive when they move exclusively to online availability? How will the changing delivery of content affect the quality and depth of journalism?”” See eight other predictions. 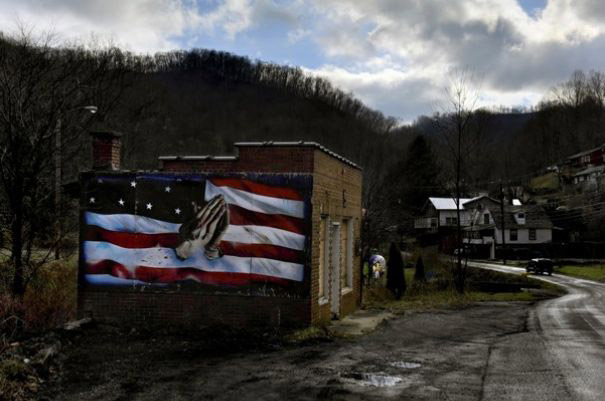 From the Post: “The children who file into Anawalt Elementary School here each morning carry burdens that hang over them like haze from the nearby coal mines. Most of the youngsters live with grown-ups who do not hold jobs, casualties of coal’s collapse. Many are being raised by grandparents because their mothers and fathers are in prison or struggling with addiction. Eight of every 10 children in the school meet the state’s definition of poor. Some rarely see a doctor. Their 1924 school building has a failing roof, steps that tremble under the weight of an adult, an unheated gymnasium and antiquated electrical wiring that can’t power air conditioning. There are no after-school activities, because if the children miss the school bus, they have no way to reach their modest houses and trailers, which are tucked into mountain crevices. There are no recreation centers, no YMCAs. Leaving the county is so unusual that on a school trip to the Dollywood amusement park in Tennessee last year, several children mistook a highway rest stop, with its glass doors and bright lights, for their destination. […] The southernmost county in West Virginia, McDowell has produced the most coal in this mining state. For generations, that was enough to sustain the community, which swelled to 100,000 by 1950. But once coal and the related steel industry started declining in the 1960s, McDowell’s descent was rapid. The first food stamps issued by the federal government went to an out-of-work McDowell coal miner and his wife in 1961. Today, the population is about 22,000.” The full story.