I’ve never been a fan of capitalism, but Steve Jobs made that a difficult position to uphold.

Jobs created one of this country’s biggest and most successful corporations by actually producing things good and real. The products were good because Jobs imbued those products with his own peculiar vision of things. That alone makes his corporation an exception to the general rule of America’s big business today.

Mind you, Jobs did not create this new age wrought by computers. Norbert Wiener, whose best known book was God and Golem, published in 1964, invented the term cybernetics in the early 1940s. Cybernetics has all to do with machines and man and then machines making machines. The upshot was that computers would give every person extraordinary new labor power and thus transform the world.

Karl Marx created the world’s most powerful ideology of revolution by talking about the struggle between the ruling class and the proletariat over the division of labor power. But the computer age introduces a new wrinkle into the equation–it gives everyone the ability to extend their labor power many fold.

I grew up in the early 1950s, hearing constant talk of Wiener and cybernetics and computers. Everyone knew that computers would have enormous impact on the future. Back in the 1950s, for example, Walter Reuther, head of the automobile workers union, was being shown through a Ford factory by executives who kept ominously showing him prototype robotic machine. The executives kept making the point that one day such machines would put his union members out of business. Reuther said nothing, until they came to the parking lot. Then he looked out over the employee parking lot.

“And who is going to buy your Fords,” he said.

As a writer, I early on was drawn to computers. By the 1980s, it was hard to keep typewriters functional. At the end, I was working on an IBM Selectric, which worked fairly well when it worked. It was a temperamental machine, always in need of maintenance and it was getting harder and harder to find anyone who could fix typewriters.

I purchased a Radio Shack TRS-80, better known as a “Trash 80” because of its “word processing” abilities. A horrible phrase because there’s something disturbing to think of words being manufactured like sausage. Still, there’s some truth in the phrase. The difference between a typewriter and a computer was that a computer made not only writing easy, but editing and revising quicker. You didn’t have to type five drafts to get a final draft. You could just tinker, or even rewrite like crazy, and it was like having an extra secretary nearby typing up the new drafts instantaneously. Then the computer could turn that manuscript into type, bypassing the traditional linotype casting lines of type into lead.

The Trash 80 was terrible. When it got hot in summer, I had to put the machine in the refrigerator to keep it working. It was always going down, losing my work.

But I knew I was never going back to my old Underwoods and Selectrics.

Windows was an improvement on the TRS-80s’s DOS system, but not by much. Microsoft machines always had a clunky feeling to them–like a kluge, stuck together willy-nilly with no sense of a greater intelligence there.

I used Microsoft machines at work because for some reason Microsoft appeals to the bureaucratic soul of most modern American businesses. 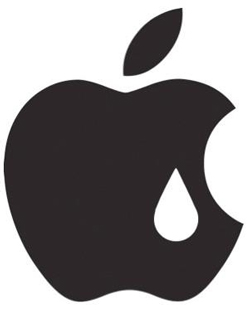 But when I discovered Macs, I never looked back. This was the future Wiener was talking about. I later became the editor of a weekly newspaper produced with a typesetting program called Quark Express. My publisher, of course, used Microsoft kluges. But the typesetter showed me something. He used his Quark Express on a Mac at home, and told me it was almost twice as fast there.

I suspect people will eventually figure out that part of Mac’s success was somehow tied up with Jobs’ fascination with type.

Nowadays typography is becoming something of a lost art. Still there’s a kind of science as well as art to why a particular type makes words resonate more than others. There is an invisible web of connections between the shape of a typeface and the way it presents the written word.

Ironically some of the best typefaces were produced well more than a century ago by typographers influenced by the Craftsmen movement using Monotype machines in the Los Angeles area, but I would be at a loss to tell you why this is so.

Why these things are so is not even well explained by typographers themselves. Like all typographers, Jobs was fascinated by the difference between serif and sans serif faces, the kerning of the letters in a line of type, and more, the “leading” between the lines of type on a page, as well as the magical powers attached to each different kinds of type.

The fact that Mac machines have a certain intuitive quality to them that Microsoft machines never had might have something to do with their much more adroit use of typography, and hence of words, which after all remain the basis of human thought and communication.

Intuition oozed from the Mac, whereas bureaucracy, rigidity and mind-numbing mundanity enveloped the Microsoft machine.

Another way to explain Jobs was that all his machines were products of human engineering. You might laugh at the term and think it has more to do with marketing, but you’d only be partially right.

I knew a man, Jack Catran, a professional psychologist, who was the human engineer on the Apollo Moon landing project. That meant he blended psychology and engineering and physiology so that the craft that ferried men to the Moon did so successfully.

What Catran was doing was blending form and function, which is what Jobs did as he developed gadgets that gave everyone who used one myriads of new labor power.

I never met Jobs, but we shared the same stomping grounds. As a kid, I remembered traveling through the orange orchards between San Jose and Los Gatos, where my grandparents lived. Now that same territory is much changed, and those orange orchards first gave away to tract homes and then to Silicon Valley.

One of the characters I enjoyed listening to at my grandparent’s home in Los Gatos, which was right next door to the Novitiate sitting on top of the highest hill in that town, was old Jack Boden.

Boden was of the opinion that I was a communist, because I considered myself a staunch Democrat. To Jack, all Democrats were communists. He regarded President Roosevelt as the “ultimate class traitor” because he had come from the ruling class, but sided with the workers. Revolutionaries, he hurumphed. It wasn’t like Jack’s opinion didn’t matter to me–he was a vice president of Wells Fargo Bank, and he lived in a mansion in Saratoga, the next town north of Los Gatos. It was a large park-like estate with manicured lawns and forests and lakes. Jack’s wife was Inez Boden, one of the main heirs of Bank of America’s Giannini family.

Boden’s dislike of my politics had practical implications for me. He was the trustee of my grandparent’s will, and he made sure I was forever excluded from any family money.

Nonetheless, I got to say Boden did one good thing. When Steve Jobs was still working out of his parent’s garage, it was Boden who put up the initial capital to get Jobs going.

As a venture capitalist, he inadvertently financed a revolution. I doubt he knew what he was doing, but Steve Jobs obviously did.

Lionel Rolfe is the author of “Literary L.A.” Many of his books, including “Literary L.A,” “Fat Man on the Left,” “The Menuhins: A Family Odyssey” and “The Uncommon Friendship of Yaltah Menuhin and Willa Cather” are available digitally in Amazon’s Kindlestore. Rolfe’s website is here.