The Children’s Memorial Garden is possibly the most moving public space in Palm Coast. It is located along the Intracoastal Waterway, just north of Waterfront Park, along a path of its own, in the shade of mossy trees as if naturally bowed over the sanctuary below. Pavers mark the memory of children lost too soon, their names mingling with poetic lines: “We shed tears for what might have been,/a million times we’ve cried…” The garden draws its emotional effect from its modesty: there’s nothing ostentatious about it, nothing overt to obstruct reflection.

It is ironic that a place so pastoral and sorrowful has become the source of so much conflict. That conflict came to a head earlier today before the Palm Coast City Council, and provoked an extraordinary—and extraordinarily personal—reaction from City Manager Jim Landon.

The garden was a concept developed in 2009 by Ed Caroe, a brash and outspoken political old hand locally who often finds his way on advisory boards and politicians’ campaigns, and Bill Butler, the city’s landscape architect. Both men have lost a child prematurely. Both children are memorialized at the garden, which opened last year.

The site was selected because of its inherent beauty: it is close to virgin land, with little neighboring construction across the Intracoastal. But there’s a catch. The site is beautiful now. But it is not owned by Palm Coast, but rather by the Florida Inland Navigation District, which maintains the Intracoastal Waterway, and it is adjacent to a “Dredged Material Maintenance Area,” which may become as dreadful as it sounds, should the site be used for that purpose. That may not happen for years.

Palm Coast Mayor Jon Netts is one of the navigation district’s 12 commissioners. It was through his intercession that the district leased the land for the garden, “with the very explicit understanding,” Netts explained today, “that if and when they would need the site relocated, it would be relocated by the city. At the city’s cost. Their concern was that these things would develop a life of their own, and that 20 years from now when FIND says we have to move it, there’s going to be this huge upcry and resistance and they’re not going to be able to fulfill their mission. We assured them now this is going to be small, it’s going to be quiet, passive and it’s not going to be a big deal to move it if we have to relocate it to some other site at some time in the future.”

In other words the modesty and pastoral nature of the memorial garden was as much by design as by necessity: the city has a conditional agreement with the navigation district not to turn the garden into a more entrenched installation with deep foundations.

Here’s the conflict. Questions emerged about what constitutes a “child,” who would be eligible to be memorialized there, whether birth and death dates should be allowed on pavers or plaques in the ground, whether statues or sculptures should be allowed, whose sculptures might or might not be allowed, and under what standards. The city had developed none of those standards. Caroe, whose involvement in the development of the park gradually turned into a form of quasi ownership—to Landon’s annoyance—spent months trying to convince the city to go along with some standards, based on guidelines Netts had drafted last year. But some of the standards conflicted with the city administration’s management of the garden.

It turned into a personal conflict between Caroe and Landon, who opposes Caroe on several grounds: what goes on pavers should be at any family’s discretion, including dates. Sculptures should not be allowed from one individual if they’re not going to be allowed from others (Caroe wants to donate four bronze sculptures, at a cost of about $10,000, to the gardens), and the city should ultimately oversee the garden, not volunteers. That is, not Caroe.

About 20 minutes into the discussion, Landon spoke, revealing a profound personal loss that takes him back to Texas.

“This is going to be difficult for me to get through but I’ve determined I’m going to do this,” the city manager said. “First of all, you have an individual who’s trying to control, I’ll just say it, it’s Mr. Caroe, he’s tried to control it since day one, and he’s frustrated because it is a city park and we don’t go to him and ask, yes. If he has people he wants to help consult, and provide information and help with what’s on that plaque, or stone, great, no problem, he can do that. But my wife and I very likely are going to do this too. And I find it downright ludicrous, if not downright offensive, with the idea that I’ve got to go to any individual to determine what’s going to be on my paver. You want to know why those dates are important? The date that child was born, a very important date. The date she died–,” Landon paused, his voice breaking.

“When you’re out there, and you’re trying to remember, she’s 30 years old now, that date actually helps. I know, OK?,” Landon continued. “You don’t want it to look like a tombstone. I kind of agree with that. But for some of us we’ve got to get on a plane to go to some place that’s really special. We have people who would say, I would like to have a place where I can have those same kinds of memories, here locally, where I don’t have to get on a plane. And if that means putting on that stone what I want to put on the stone, as long as it’s not offensive to other people, why would you, anybody going to tell me I can’t put it on there. There are a number people out there already have the dates on them. Mr. Caroe’s son is one of them. So he gets to remember those important dates but I don’t? I think he’s asking city council to get in an arena that’s very personal, that’s very very painful, and why are we having to go through this instead of just having a nice, pleasant place for people to remember their child is beyond me. I don’t usually get this passionate and this personal, but this is very very personal for some of us, and you need to understand that getting into their personal business on this one is just not something I recommend you do.”

“I think this should not become a war of personalities,” Mayor Netts said, after other council members agreed that a clear policy should be written. The issue, Netts said, is how to fulfill the city’s obligation to the community for a memorial garden and to FIND to stay in line with the lease agreement. “It’s not an issue of what Mr. Caroe wants or what Mr. Landon wants or what Jon Netts wants or what Frank Meeker wants.”

But as often as not, personalities define policy—or lack of policies—and in this case the council was finding itself in the middle of two big personalities with a personal stake in the modest ground they both were trying to delineate their way.

“I’ve been misrepresented here by Mr. Landon quite a bit and I’m going out of my way not to do that back, but I’ve never tried to eliminate anybody,” Caroe said, when Netts allowed him to speak to the council. “What I’ve said is it’s awfully tough for younger people who lost a 2-year-old to a brain tumor, to look at something that says that date, birthday, that death date, that’s a kick in the gut. If it has the death date, fine, but both of them that says how old the person is, and it ruins them for people. And bereavement people who are professionals, and I can bring some in, will say that the younger people cannot be with the older people, it doesn’t work in a bereavement session.” He said he’d pushed for the Leisure Services Committee to have a say in this, and said he’d go along with any policy that would be set by the council.

“I’m not trying to run things, I’m trying to stop it from going in a direction that’s just going to run it downhill in my opinion,” Caroe continued, “and that solely comes down to the one thing, if you can figure out that that person was 56 years old, that really spoils children’s memorial garden. As Holsey said,” Caroe said, referring to council member Holsey Moorman, “if he died in 2009, I don’t care if he was 212. I don’t known when he was born. Not a problem. I hope you go in that direction.”

The 40-minute discussion did not clarify matters. It’s not clear where the council stands on sculptures and statues. It’s not clear where it stands on dates or ages. “Would it be appropriate for my mother at 95 to have a paver for her daughter that died at age 66 of cancer, because that was her child?,” council member Frank Meeker asked.  “I understand that that’s my mother’s child, but when I think of a children’s memorial—it’s not a child’s memorial park, it’s a children’s memorial park, and in my mind I have a loose definition of children.”

The council referred the matter to its leisure committee and staff to develop standards and, presumably, a policy. Later in the day, Netts said the matter may actually be referred to the city’s beautification advisory board, which spent several months last year discussing standards for public art and statuary in public places, and may be better positioned to handle the matter.

The council then moved on to more temporal matters. 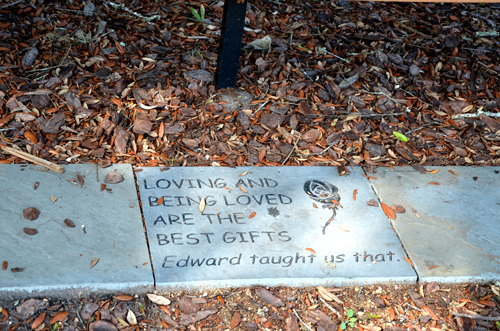