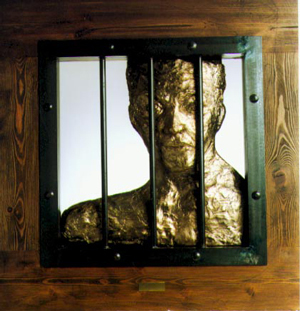 Network news was once about authority: Walter Cronkite, Roger Mudd, Ted Koppel, even Dan Rather in his reporter days. But when was the last time a network, as opposed to a newspaper or a magazine, broke major investigative news vital to the public interest like the Abu Ghraib scandal (The New Yorker), the Bush administration’s secret prisons (Washington Post), the NSA wiretaps and international finance snooping (New York Times), the Marines’ massacre of Iraqi civilians at Haditha (Time magazine)? So much fine print journalism is being produced week in and week out, it’s difficult to keep up. But most Americans still get their perceptions of the world around them from the networks. And for network news these days, it’s about deference to authority: When anchor chairs are filled by the likes of Katie Couric and Charles Gibson, it’s more about putting a good face on the news than breaking it.

No wonder the networks’ news divisions are indistinguishable from their entertainment function. One running example stands out as an illustration of the networks’ degradation – and irresponsibility.

On Nov. 11, 2004, NBC’s Dateline aired a segment called “To Catch a Predator .” Reporter Chris Hansen went on the prowl in a New York City suburb with tabloid journalism’s standards – the hidden camera, the ambush, the crucifixion on camera – and with a little help lured 18 men in three days to a house where the men thought they might have sex with a teen they’d chatted with online. The “teen” was actually one of a stash of adults at an organization called Perverted-Justice, a Web-based organization that turns the table on would-be predators. A few staffers and many volunteers at Perverted-Justice pose as boys or girls, open themselves up to sexually explicit online chats with adults, then set up stings with the police, or Dateline, to nab them. NBC’s segment was such a ratings success that Dateline did it again in November 2005, then again in February 2006, then made it a running series, with four shows between April 27 and May 31. At least one of those drew more than 10 million voyeurs – I mean viewers.

After the second, maybe the third show, there couldn’t possibly be any news value for viewers. There was nothing more to learn, though obviously still plenty to leer and peep at. What slight news values the segments had to start with turned to voyeurism, explicit collaboration with police (not in any news organization’s job description) and checkbook journalism: NBC paid Perverted-Justice $100,000 last year to help with the show, an ethical violation of journalistic standards that produced barely a peep. The segments went on.

Note the dates. November, February and May are three of the four “sweeps” months in television, when the networks’ advertising rates are set based on ratings during those months – and when news divisions line up all their sexually themed “investigations.” Stories of underage sex in any variation are a particular favorite among network executives, whose own predatory instinct during sweeps is a job requirement.

The most glaring thing about Dateline’s “Predator” series isn’t the overkill, the ethically compromised nature of the show’s relationship with police and Perverted-Justice, or even the tawdriness of Chris Hansen playing a pathetic game of gotcha with pathetic individuals. It’s the fact that the whole premise of the series is based on a lie: That there’s “an epidemic of sexual predators in our country,” and that based on “a recent study,” according to NBC, “one in five children online is approached by a sexual predator, a predator who may try to set up a face-to-face meeting.”

Not quite. Dateline, like the Center for Missing and Exploited Children, like other news reports citing the same myth, are relying on a study by the federal Office of Juvenile Justice that found that 19 percent of Internet users age 10-17 “received an unwanted sexual solicitation in the past year,” but three-quarters of those were from fellow-children or juveniles. Just 3 percent of youth Internet users “received an aggressive solicitation involving offline contact,” and “none of the solicitations led to an actual sexual contact or sexual assault.” An “epidemic” of predators? Hardly. Twenty percent of children online “approached by a sexual predator”? Ridiculous. There’s no question that Internet predators are a reality, and that children and parents need to be aware of the right precautions.

But context, perspective, analysis – those standards of basic explanatory journalism would defeat the purpose of a series like “To Catch a Predator ” by making its claims absurd on their face. Yet it goes on, watched and probably believed by millions. The false premise not only survives against obvious evidence. It powers on the show and its popularity, and encourages hysterical and abusive laws.

Sounds familiar? “To Catch a Predator ” is the perfect metaphor for the war on terror as the Bush administration has been selling it, and as the American public has been buying it.