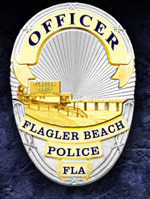 An off-duty Flagler Beach patrolman was arrested for driving under the influence Saturday evening after Flagler County Sheriff’s deputies found him passed out in his personal vehicle, a 1998 Jeep four-door towing a trailer, in the Daytona North area around 5:20 p.m.

Deputies responded to Chestnut Avenue after receiving a report of an unresponsive man found in a vehicle that was towing a trailer. The man was identified as 31-year-old Flagler Beach Patrolman Brett Smith. Deputies said Smith failed field sobriety tests and was arrested for DUI.

He was booked into the Flagler County Inmate Facility and was released after posting $350 bond. He was subsequently placed on administrative leave by the Flagler Beach police chief.

It was not clear from the Sheriff’s Office, whose spokesperson provided the facts of the case today (March 13), how or why Smith, having been found unconscious at the wheel of his vehicle, could have been charged with driving under the influence. When asked for the arrest report, which shows in better detail the circumstances of an arrest (at least from the police’s perspective), the sheriff’s office said it would make it available Monday.

Monday Update: The sheriff’s report on the arrest indicates that a deputy was called to the scene “for a person unresponsive behind the wheel possibly in need of medical assistance.” Smith, according to the report, was sleeping with his head leaning against the car window, propped up by his arm. He would not, at first, respond to the deputy when spoken to. The deputy had to shake him awake, and smelled alcohol on his breath. Smith was unsteady on his feet, according to the report, and his speech was “slurred and thick-tongued.”

He was then asked to perform a field sobriety test, which he did, failing several steps. He refused to provide a breath sample.

A search of the vehicle “revealed an open but empty 12-ounce bottle of Bud Lite lime behind the front passenger seat on top of some clothing,” according to the report, with some liquid still in it. The deputy found a cap for the bottle in Smith’s pocket, and, behind the rear passenger seat, an open case of Bud Lite lime with a receipt dated Saturday–the day of the arrest–and several missing bottles. The full report is available here. (Note: the arrest report lists Smith’s age as 52, but his date of birth as May 22, 1980).

The Flagler Beach Police Department has 15 uniformed officers, including the police chief, two sergeants, a lieutenant, a detective and 10 rank and file officers. Those rank and file officers are paid, on average, $34,600 a year, though the amounts vary based on experience. Five years ago, the police chief appeared before the city commission seeking help on behalf of Smith’s family, which was going through difficult times due to rehabilitative health costs related to Smith’s wife. Those costs were not covered by the city’s health insurance. The commission agreed to inform the public in so far as making voluntary donations.