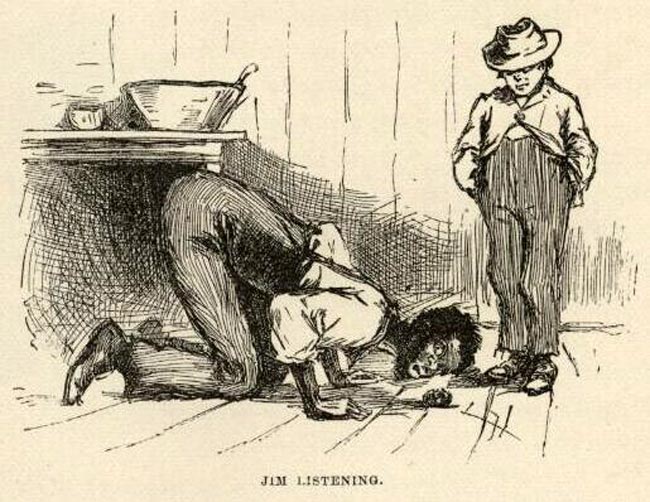 WELL, three or four months run along, and it was well into the winter now. I had been to school most all the time and could spell and read and write just a little, and could say the multiplication table up to six times seven is thirty-five, and I don’t reckon I could ever get any further than that if I was to live forever. I don’t take no stock in mathematics, anyway.

At first I hated the school, but by and by I got so I could stand it. Whenever I got uncommon tired I played hookey, and the hiding I got next day done me good and cheered me up. So the longer I went to school the easier it got to be. I was getting sort of used to the widow’s ways, too, and they warn’t so raspy on me. Living in a house and sleeping in a bed pulled on me pretty tight mostly, but before the cold weather I used to slide out and sleep in the woods sometimes, and so that was a rest to me. I liked the old ways best, but I was getting so I liked the new ones, too, a little bit. The widow said I was coming along slow but sure, and doing very satisfactory. She said she warn’t ashamed of me.

One morning I happened to turn over the salt-cellar at breakfast. I reached for some of it as quick as I could to throw over my left shoulder and keep off the bad luck, but Miss Watson was in ahead of me, and crossed me off. She says, “Take your hands away, Huckleberry; what a mess you are always making!” The widow put in a good word for me, but that warn’t going to keep off the bad luck, I knowed that well enough. I started out, after breakfast, feeling worried and shaky, and wondering where it was going to fall on me, and what it was going to be. There is ways to keep off some kinds of bad luck, but this wasn’t one of them kind; so I never tried to do anything, but just poked along low-spirited and on the watch-out.

I went down to the front garden and clumb over the stile where you go through the high board fence. There was an inch of new snow on the ground, and I seen somebody’s tracks. They had come up from the quarry and stood around the stile a while, and then went on around the garden fence. It was funny they hadn’t come in, after standing around so. I couldn’t make it out. It was very curious, somehow. I was going to follow around, but I stooped down to look at the tracks first. I didn’t notice anything at first, but next I did. There was a cross in the left boot-heel made with big nails, to keep off the devil.

I was up in a second and shinning down the hill. I looked over my shoulder every now and then, but I didn’t see nobody. I was at Judge Thatcher’s as quick as I could get there. He said:

“Why, my boy, you are all out of breath. Did you come for your interest?” 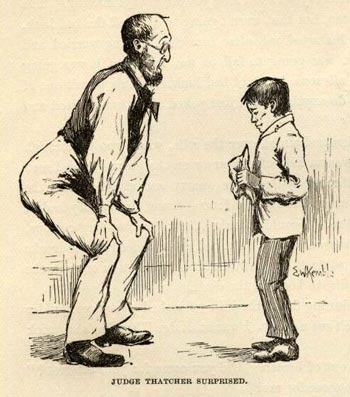 “Oh, yes, a half-yearly is in last night—over a hundred and fifty dollars. Quite a fortune for you. You had better let me invest it along with your six thousand, because if you take it you’ll spend it.”

He looked surprised. He couldn’t seem to make it out. He says:

I says, “Don’t you ask me no questions about it, please. You’ll take it—won’t you?”

“Well, I’m puzzled. Is something the matter?”

“Please take it,” says I, “and don’t ask me nothing—then I won’t have to tell no lies.”

He studied a while, and then he says:

“Oho-o! I think I see. You want to SELL all your property to me—not give it. That’s the correct idea.”

Then he wrote something on a paper and read it over, and says:

“There; you see it says ‘for a consideration.’ That means I have bought it of you and paid you for it. Here’s a dollar for you. Now you sign it.”

So I signed it, and left.

Miss Watson’s nigger, Jim, had a hair-ball as big as your fist, which had been took out of the fourth stomach of an ox, and he used to do magic with it. He said there was a spirit inside of it, and it knowed everything. So I went to him that night and told him pap was here again, for I found his tracks in the snow. What I wanted to know was, what he was going to do, and was he going to stay? Jim got out his hair-ball and said something over it, and then he held it up and dropped it on the floor. It fell pretty solid, and only rolled about an inch. Jim tried it again, and then another time, and it acted just the same. Jim got down on his knees, and put his ear against it and listened. But it warn’t no use; he said it wouldn’t talk. He said sometimes it wouldn’t talk without money. I told him I had an old slick counterfeit quarter that warn’t no good because the brass showed through the silver a little, and it wouldn’t pass nohow, even if the brass didn’t show, because it was so slick it felt greasy, and so that would tell on it every time. (I reckoned I wouldn’t say nothing about the dollar I got from the judge.) I said it was pretty bad money, but maybe the hair-ball would take it, because maybe it wouldn’t know the difference. Jim smelt it and bit it and rubbed it, and said he would manage so the hair-ball would think it was good. He said he would split open a raw Irish potato and stick the quarter in between and keep it there all night, and next morning you couldn’t see no brass, and it wouldn’t feel greasy no more, and so anybody in town would take it in a minute, let alone a hair-ball. Well, I knowed a potato would do that before, but I had forgot it.

Jim put the quarter under the hair-ball, and got down and listened again. This time he said the hair-ball was all right. He said it would tell my whole fortune if I wanted it to. I says, go on. So the hair-ball talked to Jim, and Jim told it to me. He says:

“Yo’ ole father doan’ know yit what he’s a-gwyne to do. Sometimes he spec he’ll go ‘way, en den agin he spec he’ll stay. De bes’ way is to res’ easy en let de ole man take his own way. Dey’s two angels hoverin’ roun’ ’bout him. One uv ’em is white en shiny, en t’other one is black. De white one gits him to go right a little while, den de black one sail in en bust it all up. A body can’t tell yit which one gwyne to fetch him at de las’. But you is all right. You gwyne to have considable trouble in yo’ life, en considable joy. Sometimes you gwyne to git hurt, en sometimes you gwyne to git sick; but every time you’s gwyne to git well agin. Dey’s two gals flyin’ ’bout you in yo’ life. One uv ’em’s light en t’other one is dark. One is rich en t’other is po’. You’s gwyne to marry de po’ one fust en de rich one by en by. You wants to keep ‘way fum de water as much as you kin, en don’t run no resk, ‘kase it’s down in de bills dat you’s gwyne to git hung.”

When I lit my candle and went up to my room that night there sat pap his own self!