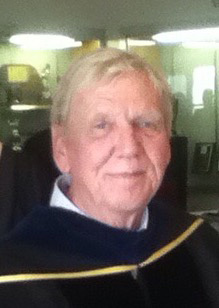 John, born December 27, 1944 in Indianapolis, Indiana, was very proud of his Hoosier roots. After attending Lawrence High School, he enlisted in the Army during the Vietnam War. He went on with his military career as an Officer in the Army National Guard.

Earning his Bachelor’s Degree as well as his Master’s Degree at Butler University, he was a life-long fan of the Butler Bulldogs and March Madness Basketball. Furthering his education, John earned his Ph.D. in Clinical Psychology and worked at many healthcare facilities.

John began his time in Florida by joining the founding fathers of Flagler, lovingly referred to as “The Movers and Shakers”. After seeing a need for women in the County, he enlisted the churches of all denominations and began the Safe House in 1987 – which eventually grew and is now a part of the Family Life Center in Bunnell.

His true calling however, was teaching. He was to go on to teach a wide array of college courses and was beloved by many students over three decades.

The funeral will be under the direction of Dale Woodward Funeral Homes, Holly Hill, Florida. He will be laid to rest at Jacksonville Memorial Cemetery with full Military Honors.