The Flagler County Commission meets in workshop at 1 p.m. at the Government Services Building, 1769 E. Moody Boulevard, Building 2, Bunnell. Access meeting agendas and materials here. The commission will discuss the Beach Management Plan study that has been underway by consultant Olsen Associates since May 2021. “Flagler County has been trying to address this for a very long time,” said Engineer Faith Alkhatib of the long history of beach studies that started in the late 1990s, before her tenure began with the county. “Data shows that we have lost 3.5 million cubic yards of sand since 1972. This isn’t something that just happened with Hurricane Matthew and recent nor’easters.” Olsen will provide an analysis of the historical information, current conditions, and what is expected for the future of the beach and dunes in Flagler County.

The Biggest Book Ban Advocates in the U.S.. From Statista: “Despite freedom of speech being enshrined in the first amendment of the Constitution, the United States are no stranger when it comes to severely limiting access to or outright banning books from schools, libraries and universities. These censorship attempts mostly fly under the radar, but a recent slew of proposed book bans ranging from educational works about the Holocaust to books allegedly fostering “sexual perversion” brought this issue to the forefront of discussions about free artistic expression once again. Even though the most fervent pushes towards censorship mostly come from school boards or political groups, they make up only a minority of recorded censorship attempts. According to data compiled by the American Library Association (ALA), 50 percent of the 147 censorship attempts cataloged in 2020 came from parents and 20 percent from patrons of public libraries. Political and religious groups made up 9 percent of proposed bans, while demands by government or educational institution officials constituted 11 percent of the total number of book censorship attempts. Some of the core reasons given for a proposed ban were the highlighting of LGBTQIA+ content, certain religious or political viewpoints as well as anti-police sentiment and profanity. Analyzing the annual top 10 lists given out by the ALA up until 2018, S.F. Whitaker from Book Riot concludes that the biggest issue for censorship advocates is the propagation of queer topics and outright sexual references. 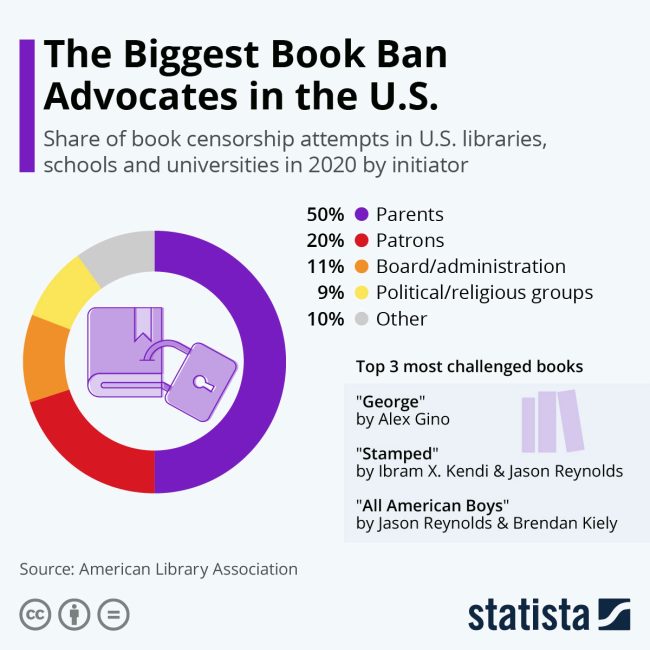 “Even in my underground dreams I did not imagine love except as a struggle. I began it always with hatred and ended it with moral subjugation, and afterwards I never knew what to do with the subjugated object. And what is there to wonder at in that, since I had succeeded in so corrupting myself, since I was so out of touch with “real life,” as to have actually thought of reproaching her, and putting her to shame for having come to me to hear “fine sentiments”; and did not even guess that she had come not to hear fine sentiments, but to love me, because to a woman all reformation, all salvation from any sort of ruin, and all moral renewal is included in love and can only show itself in that form.”