In paranoid times it’s easy to see all sorts of connections where there aren’t any. But surely it’s no coincidence that Flagler Palm Coast High School’s Thespian Troupe returns to the stage with the first full-bore production in over a year with “Into the Woods,” the Stephen Sondheim-James Lapine musical that turns fairy tales upside down and back up again.

The thespians, like performers across the country, have faced their fair share of trials and tribulations this year. “For many of us, theatre is our outlet, and our escape from the real world,” says Molly Maresca, an FPC junior and president of the Thespian Troupe. “Not having that for a while was very tough for us emotionally and mentally. The past year has basically been a waiting game wondering when we would be able to perform again on stage together, and the time has finally come.”

“There was a lot of depression and a lot of disappointment coming off of last year,” Director Kelly Rivera says. But students are eager and ready to tell stories on stage again. Rivera, whose exuberance dovetails Sondheim lyrics, says their production of “Into the Woods” is perfect timing, calling the musical–with a touch of irony–“realism at its finest.” Her vision has come to life with the students’ maturity and resilience as they convey the production’s themes of life, love, and loss mirroring the hardships they’ve faced since March.

The musical intertwines classic Brothers Grimm fairytale figures like Little Red Riding Hood and the wolf, Cinderella, Jack and the Beanstalk, Rapunzel and a witch. But this being Sondheim, the playwright of cannibalism and revenge (“Sweeney Todd”), of marriage as a plotless prisonhouse (“Company”) and of elegies to the musical (“Follies”), the jolt to the familiar is the thing: “Sondheim’s songs make a fetish of surprise, especially in their melodies, which squirm and double back on themselves, and even end seemingly in mid-phrase–anything to avoid predictability,” The New Yorker’s Stephen Schiff had written in a 1993 profile of Sondheim.


“Into the Woods” presents the harsh realities of life in the magically unrealistic setting of fairy tales and their characters’ subconscious. The woods are most definitely not just the woods, just as happy endings are anything but. The musical “deals with real life struggles and situations, and how people navigate them,” said Maresca, who plays Baker’s Wife.

By the end of Act I, wishes appear to come true and characters seem to get their happily ever after, similar to the thespians’ feelings of excitement for their production of “The Addams Family” last spring. When it was cancelled because of Covid, it left the students heartbroken. Maresca said none of them “expected Addams to be canceled, and many people had their senior show taken away from them.” The thespians metaphorically went into the woods, faced the unknown and endured a year of low recruitment, online competitions, no live performances, and loss.

By Act II, it is everything but a happily ever after, though to be fair, characters in the original fairytale literature rarely get one. Sondheim’s writing in Act II is not as strong or driven as in Act I. It becomes a bit preachy and Hallmarkey as the fairytale characters face chaos and death, though the timing of the musical gives it an unexpected–if somewhat tragic–lift. Some of the dialogue reflects the ordeals the students, and the world, have endured. Confused and frightened, the characters turn on each other. They bicker, fight, and point fingers just as the country’s leaders have, undermining the pandemic’s severity, and refusing to take blame. The witch, played by Justice Dewees, at one point says: “Wake up. People are dying all around us,” an uncannily relatable statement.


The world grappled with the loss of thousands. More personally, the thespians had to deal with the loss of former thespian TJ Hawkins, said to have died of an accidental gunshot in March 2020 and the death of Principal Tom Russell to covid. The ability to perform might pale as a challenge in comparison, but it was their challenge, some of it refracted by the conditions of production: the students are wearing clear theater masks and face a floor reduced to 250 usable seats, with seated patrons required to be six feet apart. It’s all part of the new world of covid. Auditorium Director Amelia Fulmer called the students’ capacity to overcome obstacles “amazing” as she termed the musical “a celebration.”

It’s no wonder the director and her students felt so connected to the script. The characters are pummeled with obstacles that pull them apart, but in the end realize the need to come together and defeat an existential threat, which is exactly what Rivera instilled in her students throughout the pandemic.

“One of the biggest themes in the show is that no one is alone,” Maresca says, repeating the title of the song at the end of the show that can leave people in tears. “This pandemic has been a very lonely time for many people, and it is important to remember that there is always someone here for you. People are dying all around us, but by working together, we’ve been able to conquer the threat in our midst. ‘Into the Woods’ reminds us that, even in our darkest hours, as the characters say, ‘no one is alone.'” 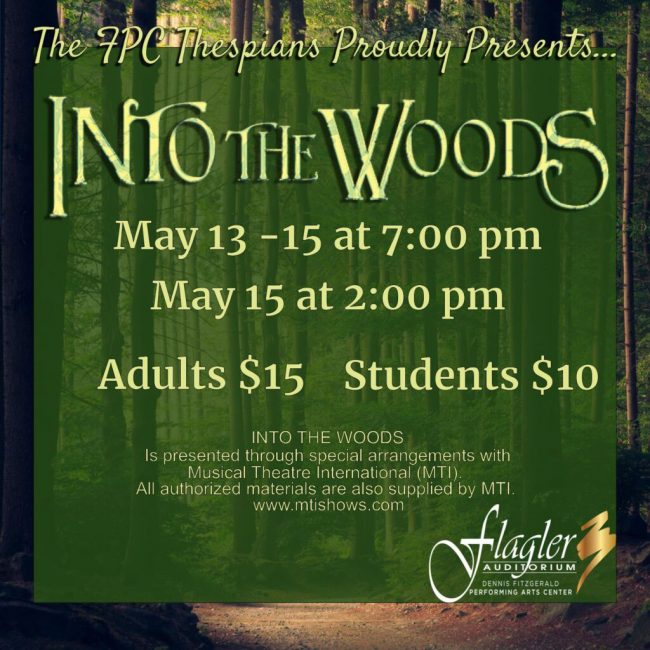