The following public relations release is published as a courtesy to the issuing agency and does not necessarily reflect FlaglerLive’s news standards or styling.
Sitemap 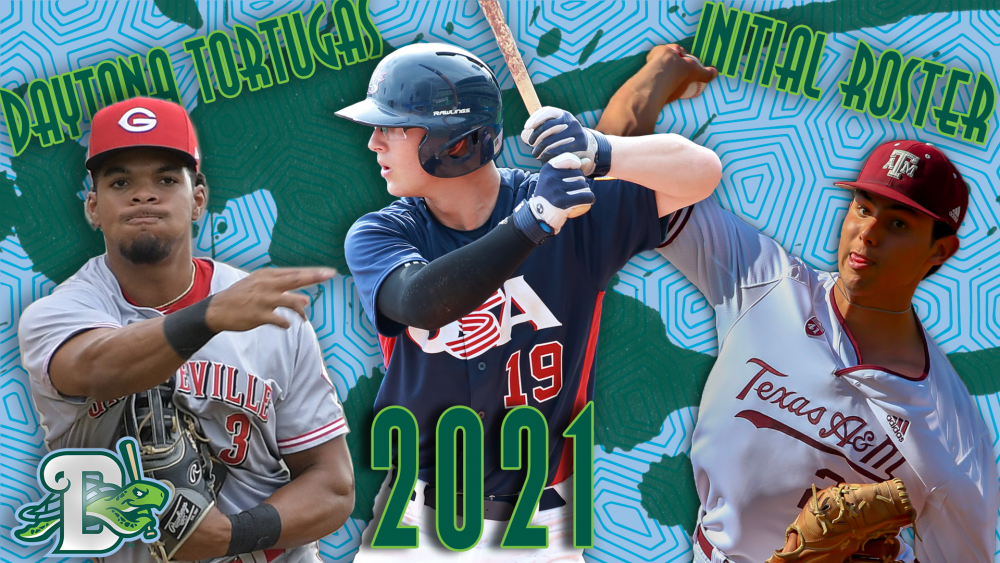 The Daytona Tortugas, in conjunction with the Cincinnati Reds, have announced their initial roster for the upcoming 2021 campaign, headlined by 2020 first-round pick OF Austin Hendrick and 7 of Baseball America’s top 20 Reds’ farmhands, plus eleven of the top 41. The first roster comprises 31 total players, including 16 pitchers, three catchers, eight infielders, and four outfielders.

Hendrick — the Redlegs’ No. 2 prospect and No. 86 on Baseball America’s current top 100 — will make his professional debut with Daytona after being selected 12th overall out of West Allegheny High School (Imperial, Pa.) in last summer’s MLB Draft.

2019 second-round pick Rece Hinds (No. 8) is set to be a part of the Tortugas’ 2021 infield after thriving during the shortened 2020 campaign at the Reds’ alternate training site in Mason, Ohio. That year’s third- and fourth-round selections Tyler Callihan (No. 16) and Ivan Johnson (No. 12) are also a part of the unit after each clubbed six home runs in their professional debuts.

A former standout on Cuba’s U18 national team, Michel Triana (No. 18) is also scheduled to make his professional debut in the ‘Tugas infield after signing with the Reds’ organization back in July of 2019. Gus Steiger (No. 38) makes his first professional appearance with Daytona after being a two-time All-Summit League performer collegiately at South Dakota State. 20-year-old Debby Santana (No. 36) rounds out the talent-laden group after slashing .310/.327/.410 with the Arizona League Reds in 2019.

A high-powered pitching staff will be anchored by the Reds’ 2020 second-round pick RHP Christian Roa (No. 11). The 22-year-old punched out 93 hitters in 82.2 innings with SEC stalwart Texas A&M. RHP Bryce Bonnin (No. 17) — Cincinnati’s 2020 third-round draftee — also graces the staff after whiffing 10.0 batters per nine innings (108 K in 97.2 IP) over three campaigns between Arkansas and Texas Tech.

RHP Case Williams (No. 37) caps the collection of ranked farmhands on the Tortugas’ initial roster. At just 19 years of age, the Castle Rock, Colo. resident is the youngest player on the squad. Williams will also make his pro debut after being selected by the Colorado Rockies in the fourth round in 2020 from Douglas County High School. He was acquired by Cincinnati along with RHP Jeff Hoffman in exchange for RHP Robert Stephenson and 2019 Tortugas OF Jameson Hannah in November.


In all, 12 of the 31 players on Daytona’s initial roster will make their professional debut when they appear in their first game of the season.

Gookie Dawkins returns as Daytona’s manager for the 2021 season after holding the role of hitting coach back in 2016. His staff includes hitting coach Darryl Brinkley, pitching coach Forrest Herrmann, and development coaches Dick Schofield and Reggie Williams. All four of them are in their first season with the franchise.

Daytona will open the 2021 campaign on Tuesday, May 4, on the road against the Palm Beach Cardinals, Low-A affiliate of the St. Louis Cardinals, at 6:35 p.m. ET. The Tortugas will return to Jackie Robinson Ballpark to roll out the green carpet for their long-awaited home opener against the St. Lucie Mets, Low-A affiliate of the New York Mets, on Tuesday, May 11. Gates will open at 6 p.m. ET. The first pitch is scheduled for 7:05 p.m.

Season ticket, multi-game plans, group packages, and more are currently available and can be purchased online at www.daytonatortugas.com or by calling the Tortugas’ Ticket Office at (386) 257-3172.