Put away those fireworks and charcoal grills.

Starting Saturday, Flagler County will become the 23rd county in Florida to impose a burn ban as the local drought index continues to climb, creating conditions more conducive for wildfires. The county last had a burn ban in 2017. It was in effect for six weeks from the end of April to the beginning of June.

The current drought index in Flagler is 451 on the so-called Keetch-Byram Drought Index, with zero signifying saturated grounds, and 800 the driest conditions possible. The index is rising by 10 to 12 points a day.

“There’s no significant rain any time soon so we decided to go ahead and do the burn ban now, going into the Memorial Day weekend. Until we get any rain we’re going to have to hold tight on it,” Flagler County Fire Chief Don Petito said. “You’ve got the Covid going on. We haven’t done outside training, or training together. We get a fire and all of a sudden everybody is working close together or in pairs. I’d rather that not happen if we can prevent it.” The county has 97 firefighters total. Palm Coast, which has 59 firefighters, and Flagler Beach’s fire departments–with 16 firefighters, five of them part-time–face similar challenges.

“We are asking people during these wild times to use more common sense,” Palm Coast Fire Chief Jerry Forte said. “We know people want to enjoy themselves, but we have to be responsible during the holiday.”

Independence Day fireworks in Flagler Beach and Palm Coast have already been cancelled because of the coronavirus emergency, so the burn ban has no bearing on those days either way. But Flagler Broadcastin’s Rockin the Runways event, scheduled for June 26 and June 27 at the Flagler County Airport, has fireworks scheduled on both nights. Absent rain, those fireworks may have to be cancelled, Flagler County Fire Chief Don Petito said.

“We’re hoping we’re going to get some rain before that,” Petito said, seeing the next four weeks as ample time for rain events. “If we don’t get significant rain, those might be cancelled altogether with the burn ban or they might have to shoot smaller fireworks and pay for extra units all around there, because those are thick woods out there.”

Petito said it’ll be a play-it-by-ear decision that will depend on what the drought index is, and whether the county is battling any fires at the time. If the drought index is 400 or below, and no fires are going on, then the fireworks may take place, he said–with extra fire protection that the organizers will have to pay for. If the index is higher and the county is battling blazes, then the fireworks will have to be cancelled. (The airport is county land surrounded by Palm Coast. But the jurisdiction is the county’s.)

There were two fires Thursday and two today, all on the west side, Petito said. One of the fires was four acres in close proximity to houses, requiring evacuations. The fires were stopped before doing damage to structures.

Today there was a quarter acre fire in the Mondex, on Elder Street, and a car fire on the side of the road. The grass caught fire and spread flames to the woods at County Road 305 and State Road 100. “It’s a little bit volatile out there,” Petito said.

Thursday evening firefighters responded to a fire at Old Kings and State Road 100, in the Winn Dixie Plaza (Flagler Plaza), behind the Hampton Inn, following a lightning strike. County and Palm Coast firefighters were on that fire until 10:30 p.m. The Division of Forestry had to send in tractors to cut lines.

“I wholeheartedly agree with the burn ban,” Palm Coast Fire Chief Jerry Forte said this afternoon. Open burning is already prohibited in the city, but the burn ban will impose additional restrictions the city will monitor. “We actually can go out and inspect them to make sure if they have a barbecue on the backyard that they have a screen over the barbecue, that they have a hose for water in the area,” Forte said.

If there’s a complaint about fireworks or an open fire, “We usually will send a truck out and ask for a deputy to respond as well,” Forte said, “and we’ll try to find the location where it’s at. If it’s an unauthorized burn we will contact Florida Fire Service so they can write a summons. Fireworks is definitely a law enforcement issue.”

“I am glad to see this area take a proactive approach,” Flagler Beach Fire Department Captain Stephen Cox said. “Flagler County has gained a lot of experience with wildfires. With experience comes knowledge as well as lessons learned. We obviously can’t reduce natural causes like lightning, but we can minimize human contribution. If we all do our part, we can hopefully prevent an unwanted incident from occurring.”

Nineteen counties have imposed burn bans across the state, and four counties have a permanent ban on burning of yard debris, amounting to a prohibition similar to a burn ban.

The burn ban prohibits the following: 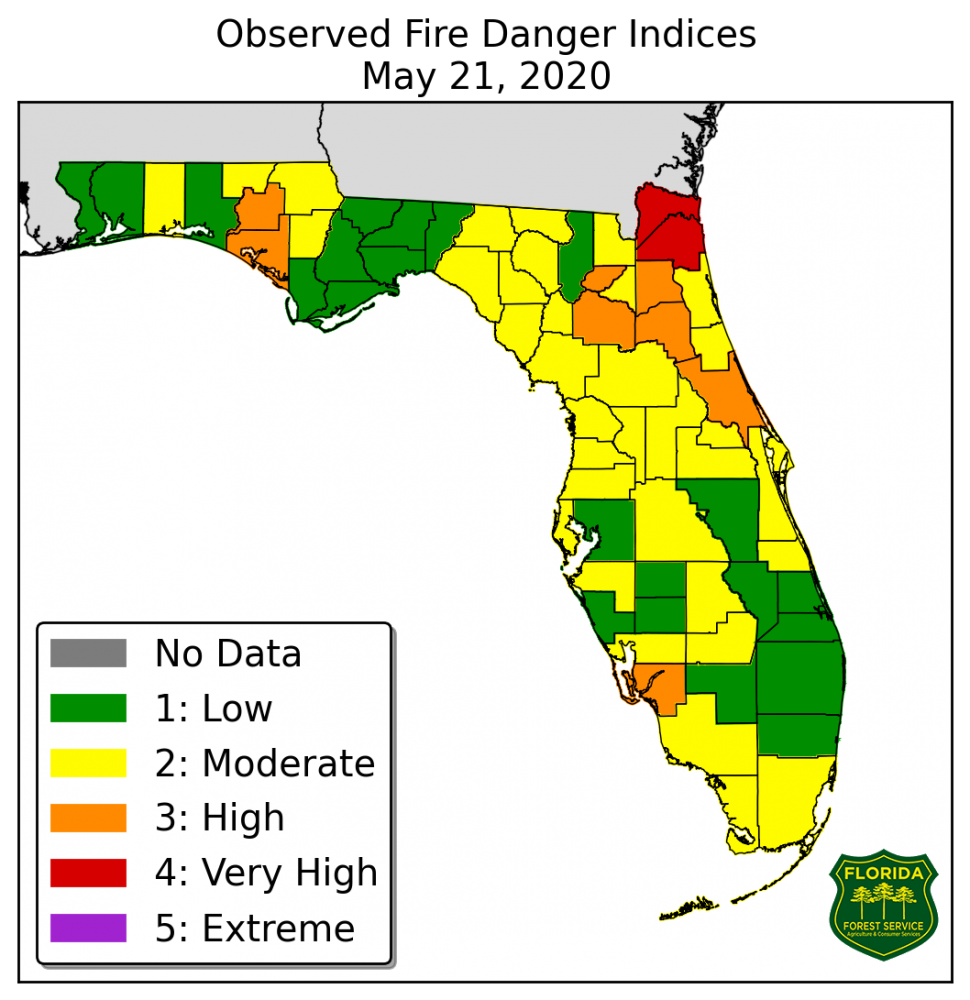