With little debate, allowance for just one opponent to speak and a time-certain end to discussion that cut off all possibility of further discussion, the Florida Senate Judiciary Committee at 6 p.m. approved a controversial bill that would require felons to pay most financial obligations in the terms of the sentence even after serving parole or probation.

The 3-2 party-line vote followed a hurried 27-minute hearing on the bill, sponsored by Sen. Jeff Brandes, the Pinellas County Republican. Opponents of the bill are pleading to make financial burdens a roadblock to voting.

They were not without a small victory today: Brandes’ original bill expanded the definition of “murder” to include “attempted murder” among the prohibitions on voter restoration. David Simmons, the committee chair and an Orlando Republican, offered an amendment that stripped that provision from Brandes’s bill. Simmons’s amendment also eliminates court and other costs converted to civil liens–as opposed to fines and restitution–from required payments before the voting right is restored. Proponents of Amendment 4 called it a step in the right direction, but not enough of one.

Last November 65 percent of Florida voters approved a constitutional amendment that restores felons’ right to vote “upon completion of all terms of sentence including parole or probation.”  Those convicted of murder or a felony sexual offense were excluded. The amendment does not call on the Legislature or a state agency to interpret it.

“Some believe this is a self-implementing bill,” Brandes said, presenting his bill. But he said the terms “murder,” “felony sexual offenses,” and “all terms of sentence” had to be interpreted, and that it was the Legislature’s job to do so by seeking to find out the intent of voters through the intent of the amendment’s sponsors. Those sponsors, he said, both before Supreme Court justices and on their websites, had included financial restitution as part of the terms of sentence.

“Maybe some of these terms need clarification. That is often the case with terms in our constitution,” Sen. Javier Rodriguez, D-Miami, the ranking Democrat on the committee, said. “The question is, who gets to make that clarification. There’s no reason why for example the courts are not competent or even our secretary of state.”

Rodriguez briefly tendered two amendments but withdrew them, both to restore additional rights to felons–the right to regain licensure for certain jobs, and the right to sit on juries again. Speaking on WNZF last week, Rep. Paul Renner, the Palm Coast Republican who supports the more restrictive restoration of rights, nevertheless said that he supported granting additional rights to felons such as sitting on juries or regaining licensure rights. 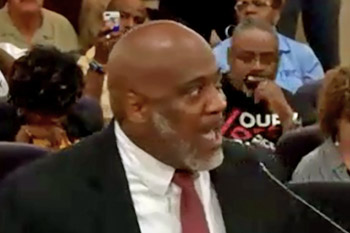 Only one opponent of the bill was given time to speak: Desmond Meade, executive director of the Florida Rights Restoration and chair of the sponsoring committee of Amendment 4 for Floridians for a Fair Democracy. He said he fundamentally opposed the bill, “but we’re hopeful for what we’re seeing now, what we just heard,” he said.

He continued, “And now after we’ve carried that ball, the Legislature wants to insert itself into something that we did on our own without any help from any member of the Legislature.”