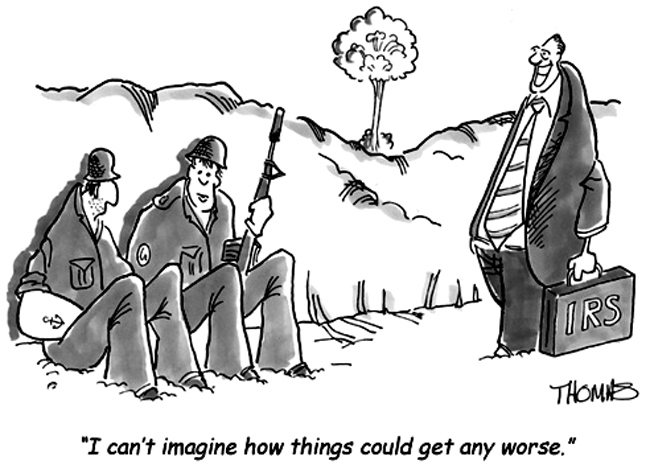 This year’s Amendment 2 is considerably less controversial and somewhat less redundant. The proposal calls for exempting military personnel, including members of the National Guard, deployed in war zones from paying property taxes for the duration of the deployment. The rationale behind the amendment, which was sponsored by State Rep. Mike Horner, the Kissimmee Republican, is that soldiers in war zones need help making ends meet back home. The military and Congress, however, have been well ahead of that curve.

Members of the military deployed in Iraq or Afghanistan are automatically exempted from paying federal or state income taxes while deployed (that applies to airmen who fly into Iraqi or Afghan air space, even for a minute: the exemption would extend to the entire month during which the flight took place.) All service members deployed in war zones also get an extra $225 a month for any portion of that month they’ve spent in the zone. They can also get an extra $150 a month when the zone they’re serving in is designated as a “hardship” zone. Those with families can also qualify for an additional $250-a-month “family separation” allowance, which is designed to defray costs associated with household expenses such as property taxes. The military also provides enlistment bonuses of up to $40,000 per enlistee.

In Florida, the proposal spelled out in Amendment 2 would apply only to those who have homesteaded properties. A homeowner in Flagler who doesn’t have a homestead exemption to start with, or a property owner who has vacant land, or a commercial business, would not qualify for the exemption. And a soldier serving in, say, Europe or South Korea, or even Bahrain (where the Navy’s Fifth Fleet is based, but isn’t considered a war zone) would not qualify.

Flagler County Property Appraiser Jay Gardner says he has no issue with the proposal, because he considers it the right thing to do, and because it would have a negligible impact on the county’s bottom line. “It’s not going to devastate us from a tax-base standpoint. I’d be surprised if 20 people qualified for it,” Gardner said. That’s an indication of how few people who are deployed in a war zone at any given time either own homes in Flagler County or are homesteaded here.

The Flagler County Commission a few years ago approved a form of tax exemption for military personnel deployed in war zones already, though technically, it’s not an exemption. The county approved a $25,000 grant, out of which individual soldiers could apply for a rebate of up to $1,000 after showing that they’d been deployed. But there’s been few takers. “They’ve never even scratched that,” Gardner said.

The St. Petersburg Times wrote in opposition to the amendment, which it said “is unfair in its application and creates another loophole in a property tax system already full of special breaks. The amount of the new exemption would be tied to the portion of the year a homeowner was deployed overseas. If the person is deployed for half of the year, the exemption would be 50 percent of the property tax bill. But the amendment does not distinguish between soldiers who are deployed to combat zones and those who are sent to less dangerous areas. Which military operations qualify for the tax break would be left to the Legislature to decide. This also gives a benefit to homeowners that would not be available to other members of the military fighting in the same wars. Floridians who are serving their country in the military during times of war should be honored. This is not the fairest way to do it.”

The Palm Beach Post is also opposed because the language of the amendment is too vague and discriminatory. “The Legislature would decide who got the tax break and who didn’t,” the paper wrote. “Why not all of them? State Rep. Mike Horner, R-Kissimmee, who sponsored the amendment, wrote that soldiers abroad should not have to worry ‘whether or not they will lose their home.’ But what about service personnel who rent? They don’t pay property taxes, but their rent pays the landlord’s tax bill. Rep. Horner said he would support a measure to give renters a break. Then why didn’t he and the rest of the Legislature include such a break when they approved the amendment for the ballot last year?”

Many other papers support the amendment. The Bradenton Herald acknowledged the problems with the tax system, and said the amendment wouldn’t help, but supported the amendment anyway: “While Florida’s current property tax laws are certainly inequitable and confusing, and Amendment 2 would add to that, military personnel and their families make a great sacrifice when a member serves overseas — especially in Iraq, Afghanistan and other dangerous hot spots. For all they endure in defense of the nation, military personnel merit this small measure of payback and thanks.”

Florida Today had more worrisome things to say about it than good things to say: “The measure isn’t perfect. It would take an estimated $13 million annually in revenue from cash-strapped counties and localities. And it creates another unfair loophole in Florida’s Swiss-cheese tax code because military men and women who don’t own a home won’t qualify.” But fearing to be on the wrong side of readers’ emotions about men and women in uniform, it recommended approval anyway.

As did the Gainesville Sun, with almost identical reasoning: “While we have generally opposed new exemptions to a state tax code that is already riddled with them, this one is a rather modest,” the paper wrote, “and it is undoubtedly for a good cause.”