The Chinese Solzhenitsyn gets it. From The Times: “Liu Xiaobo, an impassioned literary critic, political essayist and democracy advocate repeatedly jailed by the Chinese government for his writings, won the 2010 Nobel Peace Prize on Friday in recognition of “his long and nonviolent struggle for fundamental human rights in China.” Mr. Liu, 54, perhaps China’s best known dissident, is currently serving an 11-year term on subversion charges. The Chinese Foreign Ministry reacted angrily to the news, calling it a “blasphemy” to the Peace Prize and saying it would harm Norwegian-Chinese relations. “Liu Xiaobo is a criminal who has been sentenced by Chinese judicial departments for violating Chinese law,” it said in a statement. Mr. Liu is the first Chinese citizen to win the Peace Prize and one of three laureates to have received it while in prison. In awarding the prize to Mr. Liu, the Norwegian Nobel Committee delivered an unmistakable rebuke to Beijing’s authoritarian leaders at a time of growing intolerance for domestic dissent and spreading unease internationally over the muscular diplomacy that has accompanied China’s economic rise.” The full story.

Just in case we still think that what happens in China is only made in China, let’s remember what happened here a few years ago. Jane Mayer is the author of The Dark Side: The Inside Story of How The War on Terror Turned Into a War on American Ideals. From the first page to the last, in details as absorbing as they are revolting, she provides two invaluably analytical layers of context that had been missing until then: the ideological origins of the Bush administration’s rationale for its torture regime, and the way an extremely narrow cohort—Bush, Vice President Dick Cheney and a few lawyers in the Justice Department’s Office of Legal Counsel—went about translating that ideology into a policy that circumvented Congress, subverted the nation’s laws and invented “golden shields” to avoid prosecution, should the day come when the regime’s abuses are questioned. Watch Meyer talk about the shame of having to write the book, and how language was corrupted to enable those abuses:

The next line, however, concedes the very point: funding will be reduced: “Although the logical effect of increasing the maximum number of students will be to reduce the dollar amount of state class size funding, this effect flows naturally from the chief purpose—to revise and relax class sizes while providing that the Legislature has the attendant funding obligation.”

Tyler Clemente was 18. He killed himself when he was outed on the internet as being gay. Ellen DeGeneres: “This needs to be a wake-up call to everyone that teenage bullying and teasing is an epidemic in this country and the death rate is climbing. One life lost in this senseless way is tragic. Four lives lost is a crisis. And these are just the stories we hear about.” Watch the video:

Hoping to steer drug offenders to treatment instead of prison, state legislators set aside $19 million last year to create special drug courts in eight counties. […] With fewer prisoners, legislators hoped to save $95 million. That’s not going to happen, says a state report this month — unless something changes. The courts themselves are up to standard, the review says. Instead of prison, offenders are sentenced to drug court for 12 to 18 months as a condition of probation. They’re getting treatment, and judges are holding them accountable. The problem: Not enough offenders are admitted because the requirements are too strict. The Office of Program Policy Analysis and Government Accountability, the Legislature’s research arm, gave an example: Programs can’t serve probation violators if they’re in trouble for anything but a failed drug test. That doesn’t make sense to judges who understand how drug addicts violate probation. They miss meetings, fail to pay fees, don’t show up for treatment, get caught with more drugs.” The full story.

UF study: emotional effects of heavy combat can be lifelong for veterans

From UF: “The trauma from hard combat can devastate veterans until old age, even as it influences others to be wiser, gentler and more accepting in their twilight years, a new University of Florida study finds. The findings are ominous with the exposure of today’s men and women to heavy combat in the ongoing Iraq and Afghanistan wars on terror at a rate that probably exceeds the length of time for U.S. veterans during World War II, said UF sociologist Monika Ardelt. “The study shows that we really need to take care of our veterans when they arrive home, because if we don’t, they may have problems for the rest of their lives,” she said. “Yet veterans report they are facing long waiting lines at mental health clinics and struggling to get the services they need.” The 60-year study […] compared 50 World War II veterans with high combat exposure with 110 veterans without any combat experiences. Results showed that heavy combat exposure at a young age had a detrimental effect on physical health and psychological well-being for about half of the men well into their 80s. […]
Getting treatment not only prevents serious health problems but it can boost the mental well-being of veterans with heavy combat exposure to higher levels than their comrades who saw little battle action, Ardelt said.

“The study found that about half of the veterans who experienced a high level of combat showed signs of stress-related growth at mid-life, leading to greater wisdom and well-being in old age than among veterans who witnessed no combat, she said. Firing at the enemy, killing people and watching others die is enormously stressful, but it can result in personal growth as with survivors of cancer and sexual assault, Ardelt said.” The full story. 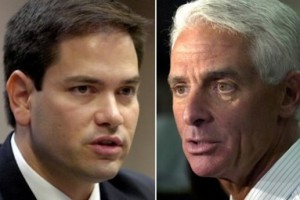 From Florida Capital News: “Republican Marco Rubio has a seemingly insurmountable 15-point lead in Florida’s hot U.S. Senate race, a new poll indicated Thursday. Rubio drew 42 percent support in the Mason Dixon Florida Poll, while Gov. Charlie Crist had 27 percent and Democrat Kendrick Meek stood at 21 percent. Brad Coker, managing director of the poll, said Crist’s independent bid for the Senate continues to lose Republican support and is splitting the no-party voters with Rubio. Meek, meanwhile, is edging upward with less than a month left in the campaign but remains a distant third. […] “Even if every undecided voter goes exclusively to Crist or Meek, Rubio can’t lose as long as he holds his current support,” said Coker.

Our Political System on Acid

When nut cases run for office and a nuttier campaign-finance system that allows them to receive anonymous financial support enables them. This Rachel Maddow interview of Oregon’s Art Robinson, an Oregonian running for Congress, sums it up:

This is surprising (though not entirely) for originating in National Review, the right-wingers’ Leveticus. Andrew McCarthy writes: “That is the Republicans’ freshly unveiled Pledge to America: big wind, no rain. It is little wonder that, in patting themselves on the back, the authors keep talking about the preamble: how uplifting it is, what a paean to individual liberty, what a contrasting vision it marks from the nanny-state status quo. The preamble is the part Republicans did not write. It’s the part they lifted from America’s Founders — primarily, from the Declaration of Independence. […] And for all the Republicans’ talk, talk, talk about the preamble, the inescapable message of the pledge is that the debate is over — and the welfare state has won. […] For all the preamble pizzazz about freedom and responsibility, when it gets down to brass tacks, the GOP has no brass: It assumes Americans are junkies hooked on entitlement smack, incapable of going cold turkey and insensitive to the fact that we’ve run out of other people’s money. Republicans obliquely promise to “make the decisions necessary to protect our entitlement programs for today’s seniors and future generations.” Feel better now?” The full piece.

Orson Welles on Art and Politics

And to think he could have prevented the whole era of McCarthyism:

From the Daily Beast: ““I’m serious about this,” the thatch-roofed reality-TV star, beauty-pageant impresario and real-estate developer insisted to me Thursday, a couple of days after he phoned in to MSNBC’s Morning Joe program and floated the idea of a 2012 presidential campaign. “Many people have asked me to run. I have never seen the country in the state that it’s in, and now I am considering it,” he told me. The 64-year-old Trump said he is more serious about this than he has been about previous flirtations with the White House. “In the early ‘90s, there was a group that wanted me to run on the Reform Party ticket,” Trump said, but he opted not to—instead cultivating a public image as a can-do, take-charge billionaire. […] Brand-strategy expert James Bell, a senior partner at the Lippincott consulting company, said Trump, much like Ross Perot in the early ‘90s, is well positioned in the political marketplace. “At a time and place where the politics in DC are paralyzed and everybody is all over one another, a Ross Perot comes into the picture—a businessman-celebrity who’s straight-talking, forceful, and decisive, a successful entrepreneur—and bang!” Bell said. “I think whether it’s serious or just entertainment value, Trump has proven that he has an appeal. I remember years ago there was a controversy over repairing the ice rink in Central Park and Trump said, ‘I’m going to do it.’ And he did it. People appreciate efficiency and the ability to get things done.”” The full story.